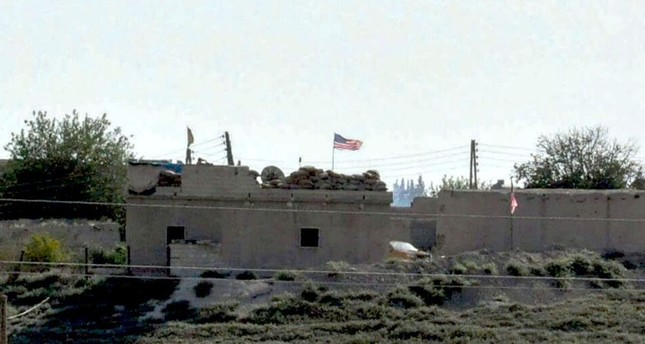 The hero's welcome of three Americans in the U.S. who died while fighting on the side of YPG terrorists in Syria is expected to add a new level of tension in the already strained relations between Washington and Ankara over the U.S. partnership with the PYD, the Syrian-affiliate of the PKK terror organization

Three American men who were killed fighting with the PKK's Syrian offshoot the Democratic Union Party's (PYD) armed wing the People's Protection Units (YPG) were given a hero's welcome when their bodies were returned to the U.S. on Wednesday, with military honors and congressmen greeting the families of those killed in their hometowns on Friday.

According to an Associated Press (AP) report, the caskets of the three men, Levi Shirley, 24, Jordan McTaggart, 22, and William Savage, 27, arrived in Chicago from Syria on Wednesday while the bodies of Shirley and MacTaggart arrived on Friday by train in Denver. Savage is being transported to North Carolina, where his father lives.

The report also said that the families of the men will each be presented with a flag flown over the U.S. Capitol, citing U.S. Rep. Ed Perlmutter, a Denver-area democrat who helped coordinate the transfer of the bodies. The PYD is the Syrian-affiliate of the PKK terrorist group, which has been fighting against Turkey for more than three decades in a bloody conflict that has caused the loss of more than 35,000 lives. The PKK is recognized as a terrorist organization by the U.S., the EU and Turkey.

Despite Ankara repeatedly reiterating that the PYD and YPG constitute a national security threat for Turkey along its southern border due to its affiliation with the PKK, Washington says that the PYD and YPG are partners in the fight against DAESH in Syria, ignoring Turkey's warning.

Shirley was killed by a landmine on July 14, McTaggart died on Aug. 3 while fighting in a squad that included two Americans and a Swede in Manbij, Syria, and Savage also died in Manbij on Aug. 10, the AP reported.

Speaking to Daily Sabah, an academic from the Turkish German University Enes Bayraklı said that the U.S. partnership with the PYD in Syria has been an important factor in tensions between the two states, as Turkey considers the YPG as a terror organization, adding that the fact that the three men were received by the U.S. as heroes is a reflection of the disagreements between Washington and Ankara.

"The U.S. has been using the PYD in Syria since relations have grown conflicted with Turkey in Syria. There is active U.S. support for the group in Syria, including men on the ground. In terms of these three men specifically, if they are just regular, left leaning, Americans fighting alongside the YPG, then why are official ceremonies being held for them?" Bayraklı said.

Galip Dalay, director of the Istanbul-based al-Sharq Forum, said that the disagreements between Washington and Ankara will continue as the U.S. aims to raise the PYD's role in the future of Syria. "The conflicting positions regarding the PYD between the U.S. and Turkey will remain in the long term," Dalay said.

Meanwhile on Thursday, photos of an American flag flying in PYD-controlled areas in northern Syria were circulated in media outlets. Anadolu Agency (AA) reported that the three flags, which have been raised in the Munbatih area in Tal Abyad, can be observed from Turkey's bordering Akcakale district in the southeastern Şanlıurfa province. Similarly on Sept. 2, several PYD and PKK militants displayed a U.S. flag in the village of Rafe, north of the liberated city of Manbij, 25 kilometers from the west bank of the Euphrates River, the report added.

Commenting on the issue in a daily press briefing, Pentagon spokesperson Peter Cook said he was unaware that the PYD was flying U.S. flags on its facilities again in northern Syria.

In April, U.S. senators in Congress admitted links between the PKK and the PYD/YPG. Secretary of Defense Ashton Carter answered in the affirmative when asked by Sen. Lindsey Graham whether the PYD and the YPG are aligned with the PKK terrorist organization, saying : "If you are wondering why Turkey is a little upset, we are arming people inside Syria who are aligned with a terrorist group. That is the finding of the Turkish government."

PYD is also known for its oppressive politics towards non-Kurds and also Kurds who do not share the same ideological positions.

On Aug. 17, Sait Derbendi, the Syrian adviser for the Iraqi Kurdistan Regional Government (KRG) President Masoud Barzani, told AA that the PYD has intensified its oppression against the Kurds in Syria who do not align with PYD politically. "The PYD doesn't tolerate any political movement other than themselves in Rojava [northern Syria]. We opened the border gate between Iraq and Syria in order to meet the people's needs in the region, but the PYD is extorting the people passing through the border, seizing their goods" Derbendi was cited by AA as saying. The PYD's atrocities against the opposition groups in Syria have also been reported by human rights groups. The Syrian Network for Human Rights (SNHR) in January said the PYD has committed multiple human rights violations, including ethnic cleansing and abuse against women, children and journalists. In August 2015, The KurdWatch, a monitoring group watching Kurdish rights' violations in Syria, also claimed in a report that PYD forcibly recruits and deploys child soldiers as young as 12 years old.

In addition to disagreements on PYD in Syria, tensions between the two long-term allies have also taken a new hit with the U.S.'s slow-acting position regarding the extradition of the U.S.-based leader of the Gülenist Terror Group (FETÖ) Fethullah Gülen, who is behind the July 15 coup attempt against the Turkish government.
Share on Facebook Share on Twitter
Previous in Politics Sait Yayla's, a former police chief who was suspended from duty due... Next in Politics Three soldiers were killed and three others were injured in an operation...
DAILY SABAH RECOMMENDS