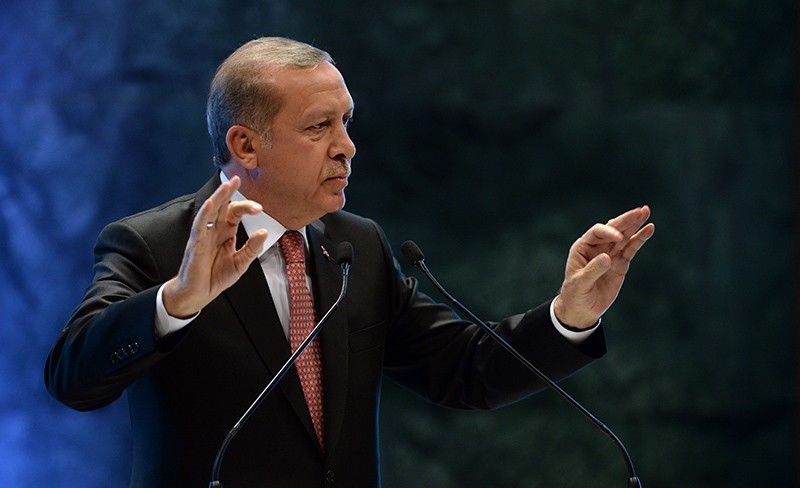 President Recep Tayyip Erdoğan on Sunday criticized the West for targeting Turkey and Saudi Arabia and urged the Islamic nations to unite and show solidarity with each other.

"Turkey and Saudi Arabia are being targeted. We see that all pitfalls and plans are pointed against the Islamic world," he said in an interview with the Saudi Arabia-based television channel, Rotana.

Turning to developments in Washington, a U.S. bill passed last week that allows victims of terrorist attacks to sue foreign governments deemed responsible was a point of concern for Erdoğan as he joined Saudi officials in voicing apprehension about the legislation.

"We expressed disapproval regarding the adaptation of the 9/11 victims bill," Erdoğan said.

The U.S. Congress voted overwhelmingly in favor to override President Barack Obama's veto of the Justice against the State Sponsors of Terrorism Act that is supported by the families of the victims of the Sept. 11, 2001 terrorist attacks in New York and Washington who hope to sue the Saudi government for its alleged role in the attacks. Obama has argued that the bill would open U.S. military personnel and officials to lawsuits by foreign governments.

Commenting on President Erdoğan's remarks, Taha Kılınç, an analyst on Middle East affairs, said that Turkish-Saudi relations are being targeted to slow down cooperation, which is important for the Islamic world.

President Recep Tayyip Erdoğan on Sept. 30 hosted the Crown Prince, First Deputy Prime Minister and Minister of Interior of Saudi Arabia Muhammad bin Nayef bin Abdulaziz al-Saud in Ankara and held a bilateral meeting, where the recently strengthened relations between the two countries were discussed. Saudi Arabia was among the countries that firmly stood by Turkey after the July 15 coup attempt. While the two countries cooperate in military activities, including four military drills alone in 2016, the economic relations between the two countries have also strengthened, reaching a trade volume up to $8 billion.

Speaking to Daily Sabah on the consequences of the 9/11 bill for the U.S., deputy coordinator of the Ankara-based Foundation for Political Economic and Social Research (SETA) Professor Muhittin Ataman said that the bill will bring with it problems for the U.S. administration, as it will lead to other states who will seek to sue the U.S. for its actions in various parts of the world.

"In recent days, the U.S. is having strained relations with three of its traditional allies: Saudi Arabia, Turkey, and Pakistan. While Pakistan is a strong military ally for the U.S., Saudi Arabia is the only strong and stable country in the Arab world and Turkey is the only Muslim and secular democracy in the Middle East. However, the Obama administration's inconsistent global policies have led it to strain relations with its traditional allies," Ataman said on the U.S. passing the 9/11 bill and added that the decision will bring further problems for the upcoming president, after the elections. "Such a decision will also let others question the U.S.'s actions during events in Vietnam, Iraq, or in Guantanamo," he added.

In response to allegations claiming that the treatment of Gülenist Terror Cult (FETÖ) members in Turkey is similar to the treatment Muslim Brotherhood members received in Egypt, Erdoğan said that the situation is completely different.

"In Egypt, the defense minister toppled the president and made bogus elections to take over the seat. This is not the case in Turkey," Erdoğan said and added that hundreds of thousands of people took to the streets when he called on them.

He highlighted that the current administration in Egypt is a coup administration and is not a democratic one and that it is necessary to resolve the problem as soon as possible.

"The process to normalize relations between Turkey and Egypt can be started if the imprisoned leaders of Egypt's democratically elected government, - including President Morsi - are released," Erdoğan said.

He also noted that the two countries have strong historical ties and that restoration of trade relations would be beneficial, but said that he would not accept any talks at the presidential level, as he deems it unethical at the moment.

At least 600,000 people have been killed in Syria due to the ongoing war, Erdoğan said, and the Islamic world should cooperate even more closely before it is too late.

Turkey and the U.S. launched an operation in northern Syria in late August to clear the area of Daish elements. Ankara has no expansionist designs for Syria, Erdoğan said as he indicated his country currently hosts nearly 3 million refugees at a cost of $12.5 billion because of an "Islamic and emotional duty."

He added that the West evades responsibility to refugees and those countries are closing their borders.

Erdoğan also said that he will meet with Russian President Vladimir Putin and U.S. President Barack Obama regarding the cease-fire issue in Syria.

He reiterated once again that Assad, who is responsible for killing 600,000 civilians in Syria, must leave and cannot be a part of the country's future.

Regarding the situation in Iraq, he said Mosul belongs to its residents.

"After Mosul will be rescued from Daish, only Sunni Arabs, Turkmen and Sunni Kurds should remain there," he said.

'UN a burden on humanity'

Meanwhile, President Recep Tayyip Erdoğan on Monday called the United Nations "a burden on humanity" due to its unfair structure and decision-making power, urging reform calls once again.

Speaking at the International Conference on Science and Technology in Ankara, Erdoğan said that the U.N. system is controlled by only five countries, even though there are 193 member states in the General Assembly.

"How can such a system bring justice?'' Erdoğan said, and added that temporary members in the U.N. Security Council rotated but did not have a say in the decision-making process.

He continued by saying that the UN is not based on fair representation of different countries throughout the world and does not establish justice and has become a burden.

Highlighting that there are no Muslim member-states in the UNSC, Erdoğan suggested that temporary membership to the UNSC be removed and the permanent seats increased to 20, ensuring that all 193 countries take equal turns.