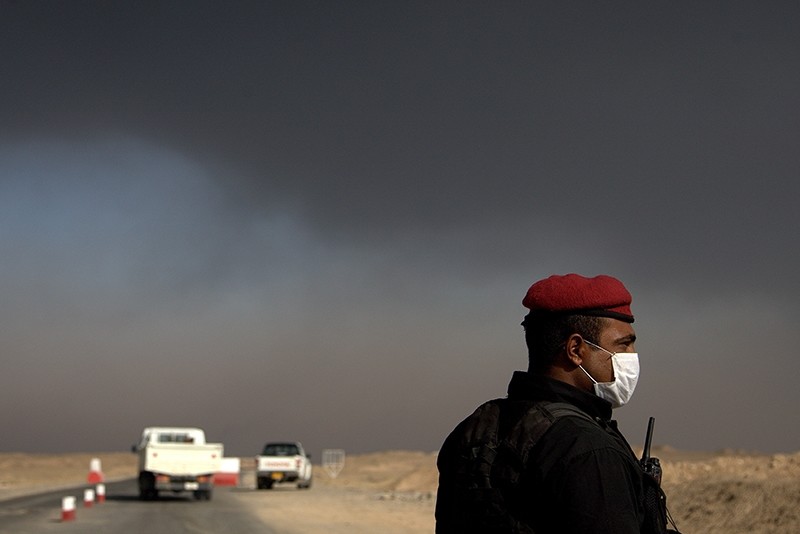 Nearly 1,000 people have been treated for breathing problems linked to toxic gases from a sulphur plant which Daesh terrorists are suspected to have set on fire near the city of Mosul, hospital sources said on Saturday.

A cloud of white smoke blanketed the area around the Mishraq sulphur plant, near Mosul, mingling with black fumes from oil wells that the militants torched to cover their moves.

Local residents and the U.S. military said Daesh militants deliberately set the sulphur plant ablaze as they strive to repel an offensive by Iraqi government forces to drive them from Mosul, their last major stronghold in the country.

Up to 1,000 people have been admitted to the nearby Qayyara central hospital with respiratory problems since Friday morning and later released, according to hospital director Abdul Salam Jabbouri. No deaths have been reported at the hospital.

"We have had every type of person come in with breathing problems and burning eyes - children, adults, policemen, soldiers," said Jabbouri. "Daesh set the sulphur on fire so nobody can come near them."

The Qayyara West airfield is the main U.S. hub to support Iraqi-led operations to retake Mosul. There are about 5,000 U.S. troops in Iraq but the U.S. military has not disclosed the number of personnel at the airfield.

"The winds have actually shifted south, so, as a precautionary measure, the troops at Qayyara West have donned their personal protective equipment - continuing their operations at this point in time," an official said on Saturday, speaking on condition of anonymity.

A Reuters reporter in Qayyara saw Iraqi soldiers wearing gas masks on top of their heads, ready to pull them down

In an examination room at Qayyara hospital, a baby, suffering from inhalation of sulphur fumes, screamed and coughed on Saturday as his father held an oxygen mask over his face.

Most patients have been given oxygen and told to stay away from areas with high sulphur concentration, according to medical aide Saddam Ahmad, who was wearing a surgical mask to protect him from the fumes.

"We've had so many patients since yesterday that we're almost out of oxygen," Ahmad said.

Ali Ahmad Khalaf, 38, who lives in a nearby village, said he had moved his family to Qayyara to escape the fumes.

"The sulphur is very dangerous," Khalaf, wearing a surgical mask and a traditional dishdasha robe, said. "Daesh just wants to kill us."

Standing nearby, Bassam Qazi overheard Khalaf and said: "I saw an old man who had choked and died from the smoke."

Air samples from Qayyara West were sent to the U.S. Defense Threat Reduction Agency for analysis as to "what, if any concerns, may result," another U.S. official said.

Iraqi state TV said the fire had been "brought under control" on Saturday, but the Reuters reporter on the scene said smoke was still visible from a distance late in the day.

Operation Inherent Resolve, the official name of the U.S-led anti-Daesh coalition, said in a statement on Saturday it had provided more than 24,000 protective chemical masks to the Iraqi security forces and the allied Kurdish Peshmerga fighters during training for the Mosul offensive.