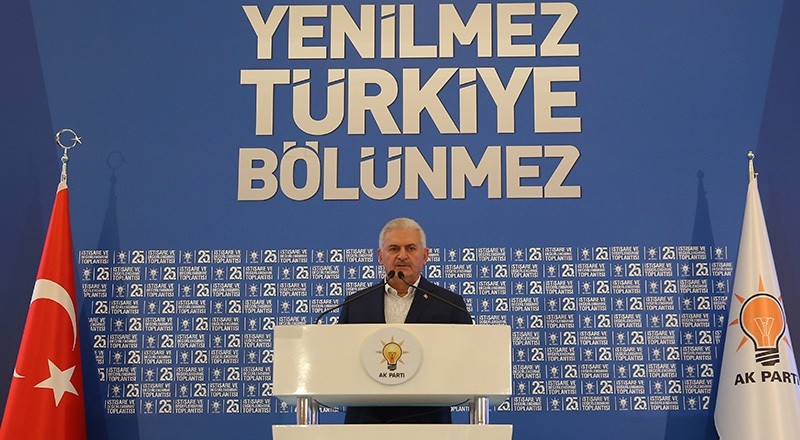 The ruling Justice and Development Party (AK Party) kicked-off its 25th Advisory and Assessment Camp in Afyonkarahisar province on Saturday with opening remarks given by the party's chairman and Prime Minister, Binali Yıldırım. During his address, he discussed all the current items on Turkey's political agenda, including the parliamentary system, the new constitution, the operations in northern Syria and the recently launched Mosul operation against Daesh.

A minute of silence and singing of the national anthem marked the beginning of the opening ceremony, which was attended by all party deputies as well as ministers and members of the Central Executive Board (MYK) and the Central Decision and Administrative Board (MKYK).

Reflecting the Afyon retreat's motto this year, "Nation cannot be defeated, Turkey cannot be divided", the event began with a video remembering those who were killed during the vicious failed July 15 coup attempt. Addressing the large crowd of attendees at the ceremony, Prime Minister Yıldırım asserted that "the future of our neighbors, Iraq and Syria as well as the Middle East is the joint future of all" and added that Turkey will maintain its presence in Iraq to prevent all types of security threats directed against it.

Underlining that the recent remarks made against Turkey by the Iraqi PM were provocative, Prime Minister Yıldırım said "we do not want a new Karbala happening in Iraq." He went on to say, "No one must introduce sectarian policies - emphasizing sects is the worst thing that could be done in this region. The current efforts in Iraq today are opening the door to possible sectarian wars and this is what we have been stressing. Aside from this, we do not have any intentions towards Iraq's territorial integrity."

Reiterating that no one has the right to tell Turkey to remove its presence in the region, Yıldırım noted that "Turkey removing its presence from Bashiqa camp would only pave the way for terror groups and attacks. It will only benefit terror groups, thus we will never take such requests seriously."

Regarding the ongoing Operation Euphrates Shield in northern Syria, Yıldırım added that Turkey-backed Free Syrian Army (FSA) fighters have already cleared 1,270 square kilometers from Daesh terrorists. He further urged the end of bloodshed in the region.

"We cannot move forward with the current constitution and system"

As the AK Party continues to work on its constitution proposal, including the presidential system, Yıldırım reaffirmed that Turkey needs a new constitution and new system since the existing system does not fulfill its current needs. He said that the July 15 coup attempt has shown the necessity of a new constitution and that all political parties should take concrete action in this regard.

Stressing that no one is concerned about the people's decision, Yıldırım urged the main opposition Republican People's Party (CHP) to side with AK Party and MHP in favor of a referendum for the presidential system and allow the people to make the final decision over the debate.

Continuing his remarks by touching upon Turkey – European Union (EU) relations, Yıldırım reaffirmed that, although the EU is Turkey's strongest ally, the EU can only succeed in playing a significant global role in political and economic affairs by partnering with Turkey.

"We have higher standards than most of the European states and in fact, if looked at objectively, Turkey has the right to become an EU member more than any other country. The EU was only able to resolve significant crises, such as the recent refugee crisis and other heavy political crises, through cooperating with Turkey… The EU's aims to have a global role can only be achieved with Turkey.

"Therefore, all topics including visa liberalization must not only be implemented but will also determine the EU's own future," Yıldırım underlined.

Regarding Turkey's continuing operation against the Gülenist Terror Group (FETÖ), Yıldırım emphasized that operations will continue until each "traitor" is eliminated.

"Our combat against FETÖ, PKK, Daesh and other terror groups are to continue with all our determination. We have caused serious damage to PKK in the most recent period," Yıldırım said.

Ending discussions regarding possible FETÖ affiliated members in the AK Party, Yıldırım stressed that "no member of the terror group [FETÖ] can be sheltered within AK Party in any way. These terror members have never existed and will never exist in the party's organizations."

He added to his remarks by noting that even if there are any FETÖ-affiliates in the party, "they will be dismissed immediately."

He concluded his remarks by informing attendees that there will be presentations made by the deputies and ministers concerning their relevant areas throughout their advisory meetings in Afyon.