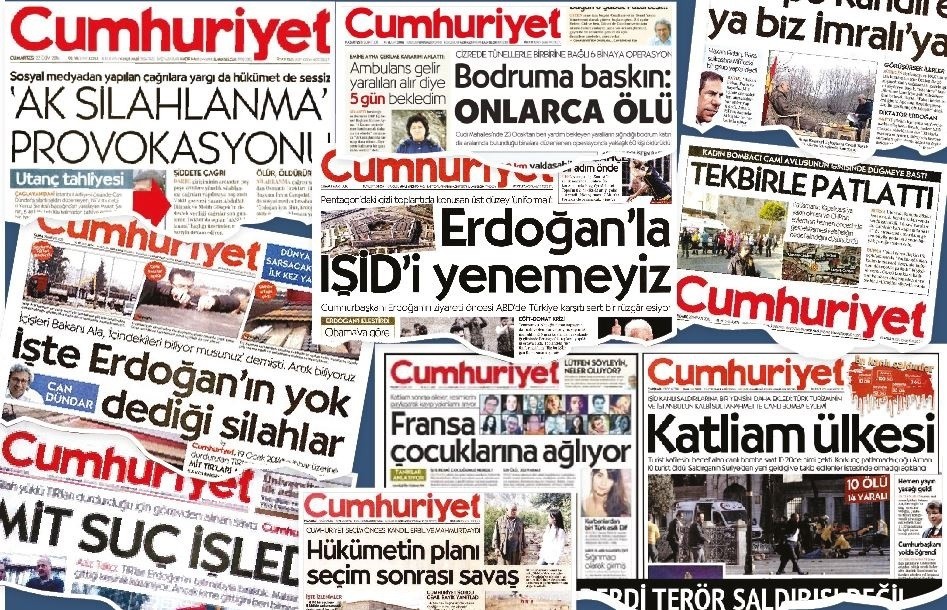 As police launched an operation on Monday against the Cumhuriyet newspaper on charges of supporting terrorism, both Turkey's Prime Minister Binali Yıldırım as well as opposition Nationalist Movement Party (MHP) Chairman Devlet Bahçeli refuted criticisms Tuesday made by the European officials' regarding the operations, indicating that freedom of the press must not be used as a tool for terror propaganda.

Speaking at his party's weekly parliamentary group meeting, the MHP chairman said: "Freedom [of the press] does not mean cursing at people," referring to Cumhuriyet daily's previous publications. The controversial daily has been operating as the mouthpiece of not only the PKK terror organization but also of the Gülenist Terror Group (FETÖ). An article published in May of 2015 revealed private documents and footage from the attack on National Intelligence Organization (MİT) trucks that were carrying aid to Turkmen groups in Syria when they were illegally raided and seized by gendarmerie and judiciary officials allegedly linked to FETÖ. The publication was the breaking point in relations between the government and the newspaper. Due to the illegal conducting of the raid, the government stressed that it aimed to deteriorate Turkey's image in the world by accusing the government of providing arms to Daesh in Syria, as it grows increasingly evident that Turkey is one of the leading actors against Daesh and all terror groups throughout the region. In the MİT trucks case, Cumhuriyet daily's former Editor-in-Chief Can Dündar and the paper's Ankara representative Erdem Gül were sentenced to five years in prison. Despite strong criticism by European officials, on December 17, 2014 Cumhuriyet's Dündar and İlhan Selçuk as well as the paper's former Ankara correspondent Mustafa Balbay along with Gülenist Nazmi Ardıç, who is the former Istanbul Organized Crime Unit Chief and one of the main instigators of the Dec 17-25 operations, were caught in a secret meeting.

Additionally to Cumhuriyet's officials' repetitive meetings with Gülenists during the Dec 17-25 FETÖ coup attempts, the paper had exact same front-page headlines twice in six months as the Gülenist Zaman daily; one of them was on the PKK's Ankara bombing which was written as "Bomb at state's heart" aiming to further cause tension among citizens. In regards to Turkey's counter-terrorism operations in the southeast against PKK, the paper ignored terrorists attacks against people and rather focused on criticizing the government's action against the terror group PKK, acting as a mouthpiece for terrorists. In that respect, the opposition MHP leader said: "Those magazines, newspapers and television channels supporting terror in their publications must know and realize that there is a limit to [our] tolerance and patience. As operations against eliminating FETÖ and PKK at every field continue, why are some agitated by actions in the media wing [of terror groups]? Hiding behind freedom of the press will not be convincing for those with the name Cumhuriyet [Republic] but harm the values of the Turkish Republic the most, and give hope to and please anti-Turkey structures. Freedom does not mean cursing at the people. Freedom does not mean mocking spirituality."

Responding to EP President Martin Schulz's Twitter statement saying the detentions marked the crossing of yet another red line against freedom of expression in the country, during the AK Party's [Justice and Development Party] parliamentary group meeting on Tuesday Prime Minister Yıldırım said: "We don't care about your red line. We will also draw a line on top of your line. It's the people who draw the red line. What importance does your line have? Turkey is not a country to be brought in line with salvos and threats. Where were your red lines when the terror organization [referring to the PKK/PYD] was promoting itself in the [European] Parliament, if you are so sensitive? You [the E.U.] will not get anywhere with your double standards… We are not going to learn what freedom of the press is from you. ...Turkey gets its power from the people and will be held accountable by the people." While the Western states insist on ignoring the will of the Turkish people and promote terror propaganda purporting it as freedom of the press, the examples of the Cumhuriyet's alignment with the PKK is clearly evident when the interview conducted by the paper just a week before the July 7 elections. The interview was conducted by one of the most notorious PKK terrorist leaders Cemil Bayık. Cumhuriyet daily reporter Ayşe Yıldırım describes living conditions in the Qandil mountains, the headquarters of PKK, as "peaceful." She says that when she asked to take picture of the terrorists, describing them as members of an organization, they "kindly" rejected. The paper went even further, publishing a photo of Mehmet Selim Kiraz, an Istanbul prosecutor killed in a courthouse in a grisly attack by the DHKP-C terrorist organization, with a gun to his head in front of a masked terrorist against the backdrop of DHKP-C symbols which were splashed across the front page of Cumhuriyet, fueling claims of terror propaganda. The paper also interviewed the DHKP-C terrorist who had murdered Mehmet Selim Kiraz.