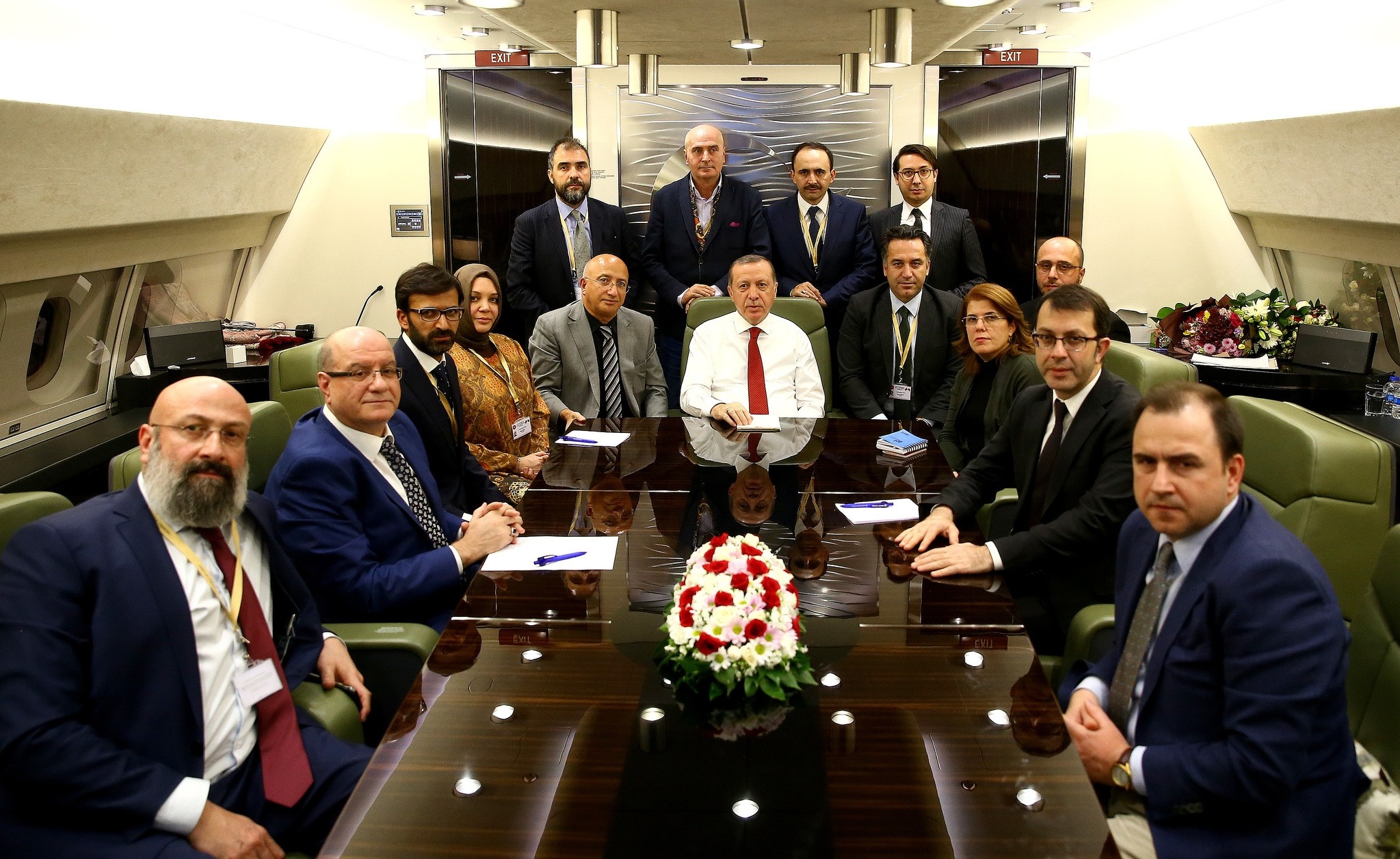 President Recep Tayyip Erdoğan, speaking to reporters early Saturday on his flight back to Turkey after concluding his official visit to Belarus, described those who were protesting against the election of Donald Trump as the U.S. president as a sign of failure to accept the democratic process, adding that he believed they would soon peter out.

"I would not be surprised if those currently on the streets soon lined up for an appointment with Trump," he said.

Turkey did not pick sides during the election campaign, in the full knowledge that no matter who becomes the president, bilateral ties between the two countries would continue as strongly as before, the president said. "Trying to contact one of the candidates before the elections would not have been proper. We made sure everyone knew that we would be working with whoever the American people choose as their president."

He also mentioned reports about Democratic candidate Hillary Clinton's campaign receiving donations from the Gülenist Terror Group (FETÖ), adding that some said such allegations would be investigated.

Speaking about his telephone conversation with Trump on Wednesday after he made his acceptance speech, Erdoğan said, "I congratulated him on his success. He will assume the post on Jan. 20. We may have the opportunity to have another conversation before that date. I expressed my wish to include Turkey among the first few countries he will visit after taking up the office."

When asked about Turkey's divergence from the Obama administration on the issues of Syria and Iraq and the use of terrorist group's such as PKK's Syrian affiliate the People's Protection Units (YPG) in the fight against Daesh, Erdoğan noted that Trump and his closest advisors had voiced policies close to that of Ankara on Syria and Iraq before the election. "Declaring a no-fly zone is very important, which they (the Trump campaign) supported. A no-fly zone would be the first step toward a safe zone."

He said it was still too early to hold detailed discussions on the issue and expressed his wish that soon after Jan. 20 officials from both countries would hold meetings. He said no one had any time to waste, noting that developments in Syria and Iraq were of utmost importance to Turkey's national security.

Terrorist group PKK's activities in Iraq and Syria, especially concerning Sinjar, were key to Turkey's national security, he said, also warning about activities of Iran-linked Shiite militia Hashd al-Shaabi as part of the Mosul operation against Daesh. Turkey continued to pay close attention to any moves that could result in harming the interests of the Turkmen minority in the region, noted Erdoğan, arguing that no one should be allowed to change the demographic composition of the region.

"I repeatedly shared my concerns with Obama and our European friends. Unfortunately, expected results were not achieved. Turkey does not want any deterioration in relations with Iraq but also everyone should make sure no injustice takes place. There are 1.5 million Sunni Arabs, 400,000 Turkmen and 100,000 Kurds in Mosul. We need to support them."

Turkey's decent military deployment in the border regions was linked to efforts to support moderate groups fighting Daesh, Erdoğan said. "We are closely following developments in Sinjar, Tal Afar and Mosul. Our military camp in Bashiqa is there to help the locals. To those who ask us to remove it, we say 'No.' We did not deploy our troops there on a whim. We were asked to train and the Kurdistan Regional Government (KRG) peshmerga and the Ninevah guards there. These groups are key in the fight against Daesh. We cannot ignore the calls of our friends in KRG and locals."

On the debate about Turkey introducing a presidential system to replace the parliamentary one, Erdoğan said he knew Prime Minister Binali Yıldırım and opposition Nationalist Movement Party (MHP) Chairman Devlet Bahçeli were in discussions over a constitutional reform package that included such a change. "Both leaders will appoint two or three officials to work on the details. I believe, afterwards, the leaders will again meet and set up a roadmap. It would not be proper for me to comment on any timetable."

He also said he hoped the meetings between the two leaders would produce an outcome beneficial to Turkey, adding that the current state of discussions seemed to indicate they had the same objective.

THINGS ARE NOT UNDER 100 PERCENT CONTROL

He also said that those who failed to topple the government in December 2015 and July 15, 2016 were furious. "Those who failed in their objectives are now thinking of assassination plots." Erdoğan suggested that the death of local administrator of Derik, Mardin, Muhammet Fatih Safitürk, who was killed in a terrorist attack believed to be the work of the PKK, may have been one of these assassination plots.

DETERIORATION IN TIES WITH GERMANY

Erdoğan was asked how relations between Turkey and Germany could have deteriorated so far within a year, from discussions over cooperation on Syrian refugees to Germany inviting those who plotted the July 5 coup attempt.

"Our discussions with Germany were never concluded," Erdoğan said, adding that Turkey's repeated proposals on making long-term investments in places where Syrians lived, both within their country by setting up safe zones and in Turkey were found to be positive by German officials, who would then fail to make any progress.

He said Europeans also failed to keep their side of the bargain on the refugee agreement. "The European Union seems to want us to retreat from the membership process. If they do, they should just say so. We can't patiently wait forever. The British government asked its people what they wanted. We can do so too. We'll do whatever our public demands."

He said things had gone much further than before. "Just think of the German Presidency inviting a person who was found guilty of terrorism and punished to five years imprisonment. He flees when he is released pending his appeal and is recited by the president of Germany and his wife. Then Paris gives him an honorary citizenship. This is a scandal. Such acts will eventually hurt them too." He said European institutions are lining up to sing the praises of militants who openly supported groups recognized as terrorists by the EU. The U.S. and EU recognize the PKK as a terrorist group.

Erdoğan said he continued to argue the necessity of annulling the citizenships of PKK and FETÖ militants who fled abroad. "The government is deliberating the matter."

On his visit to Belarussian capital of Minsk, Erdoğan said the visit had originally been planned for the end of July but had to be postponed after FETÖ's bloody coup attempt on July 15. He said he enjoyed his discussions with his Belorussian counterpart, Alexander Lukashenko, describing him as a determined leader focussed on the independence and the development of his country.

Lukashenko had voiced his support for the government after the July 15 coup attempt, Erdoğan said, adding that he had personally thanked him for the gesture. "His support for the Muslim minority in his country and his efforts to restore the mosque in Minsk are praiseworthy."

The two countries want to increase the bilateral volume of trade from the current $400 million to $1 billion as soon as possible, he said, adding that the two countries continued to maintain a close and friendly relations. He thanked the Belarusian leader for his help in efforts to ensure Russia and Turkey restored ties.

Erdoğan said he had asked from Lukashenko one hectare of land to establish a bigger embassy and related facilities, with the aim of ensuring Turkey had a larger presence in Minsk, which he said was located at a very strategic place in the middle of Europe.