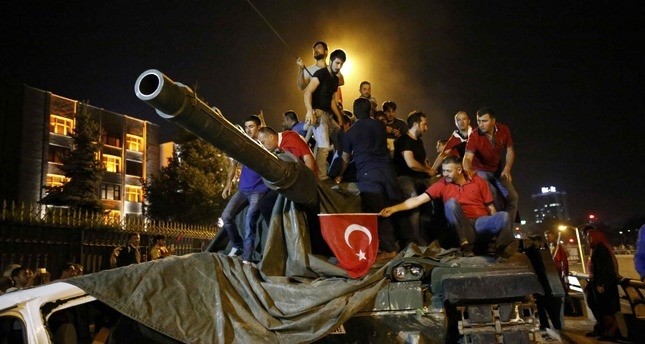 A British lawmaker has told a Turkish broadcaster there was "no doubt" in his mind that the Gülenist Terror Group (FETÖ) was "heavily implicated" in the country's deadly July 15 coup attempt.

Daniel Kawczynski, a member of parliament for the U.K.'s ruling Conservative Party, was speaking to public broadcaster TRT World about the coup plot which left 248 people killed and nearly 2,200 injured.

In an interview released on Monday, Kawczynski said: "There is no doubt in my mind that the Gülen movement is very heavily implicated in this attempted coup.

"This isn't just a movement that's operating in Turkey. We need to find out what their motives are, what their purposes are and why they have been so heavily implicated in this coup," he added.

Kawczynski is a member of the British parliament's Foreign Affairs Committee inquiry on the U.K.'s relations with Turkey. He said this committee would visit Turkey in January, adding: "We want to get the truths of this [coup]."

Kawczynski also said Turkish people were "disappointed" about the response from Western capitals over the coup attempt in their country. He said Turkey's concerns should be taken seriously.

"If people have tried to destabilize a democratically elected government in a NATO country, there should be huge concern for the U.K. ...We cannot and must not abandon Turkey," he added.

Kawczynski asked what the U.K. response would be if its citizens were "slaughtered by forces who are attempting to destabilize our parliament and overthrow the democratic will of the British people".

"I watched those early hours of the coup on television. What was really heartening is how the Turkish president [Recep Tayyip Erdoğan] and prime minister [Binali Yıldırım] rallied the Turkish people and they came out in unprecedented numbers.

"It was the Turkish people who stopped the coup," Kawczynski added.

Kawczynski also described Turkey as an "important" NATO partner which played "a hugely important" role in defeating Daesh in Syria and Iraq.

"I rather suspect that the new American president [Donald Trump] would hopefully want to listen to Turkish concerns. If America wants to keep Turkey on board, then they have to listen those concerns," he added.

"I think the EU has a lot to do to regain the trust of the Turks," Kawczynski said in the interview.

He said it would be "catastrophic" for Europe to lose Turkey as a strategic partner.

"Turkey must never be taken for granted. I think a stop-start, stop-start approach to Turkish membership by the EU is shaming. Turkey is a perfect nation to be in the EU," he added.

Kawczynski said: "You cannot have peace and security in Europe without Turkey, I would argue."