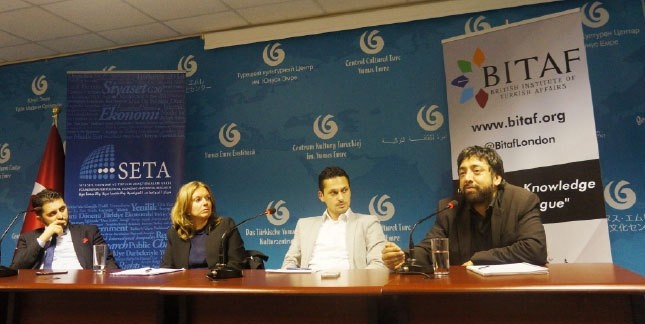 An event planned to be held at the SOAS University of London regarding "The Rise of Islamophobia and Xenophobia in Europe" on Dec. 15 was canceled just an hour before the event started after it came under pressure from some PKK sympathizers.

The cancelation of the panel has given way to questions about freedom of speech in European universities. It was organized to be held by the British Institute of Turkish Affairs (BITAF) and the Foundation for Political, Economic and Social Research (SETA) with the collaboration of the SOAS Turkish society and would have been attended by prominent academics from Germany, Austria, the U.K and Turkey.

The university administration cited the "nature" of co-organizers as the reason for the cancelation. However, it refrained from explaining what it actually intended to mean by referring to "nature."

"We all, the SOAS Student's Union, would like to notify you due to nature of the organizations [SOAS Turkish society] whom are co-organizing event, the Student's Union has decided to postpone the event pending further investigation by the union," said the message sent by SOAS to BITAF and SETA.

"Actually, this is not the first time I am witnessing the violation of freedom of speech in the U.K. The fact that our latest event at the London School of Economics was stormed by PKK sympathizers, the event managers did not do anything to prevent it," said Enes Bayraklı, a foreign affairs specialist at the SETA foundation talking to Daily Sabah.

Bayraklı said they have tried to hold this panel at three different universities in London; King's College, University College London and SOAS, however, only the latter gave permission to organize the event.

The attitude of SOAS University, where many Turkish students register every year, has fueled some negative reactions from students and visitors. The canceled panel was to be organized at the building of Yunus Emre Institute in London.

One of the speakers at the panel, Dr. Salman Sayyid from Leeds University said that about five-sixths of the panel recently canceled with the excuse of the "laws against terrorism." It was not the first time a panel organized by Turkish NGOs was disrupted by PKK terrorists in the U.K. Late November, another panel held by BITAF and SETA on the failed July 15 coup attempt was also hampered by PKK terrorists, however, the university administration preferred to not interfere and allowed the PKK sympathizers to stay in the panel.

Also in recent weeks, Turkish community centers, mosques and other buildings in London have also become the target of PKK sympathizers.

On Nov. 6, the Yunus Emre Turkish Cultural Center in central London was attacked. Two days after this incident, a Turkish mosque in the Hornsey area of London was also vandalized by PKK-affiliated miscreants. Even though attacks against Turkish community centers in continental Europe have been a problem for a while, it is a new phenomenon in the U.K. and especially in its multicultural capital London.