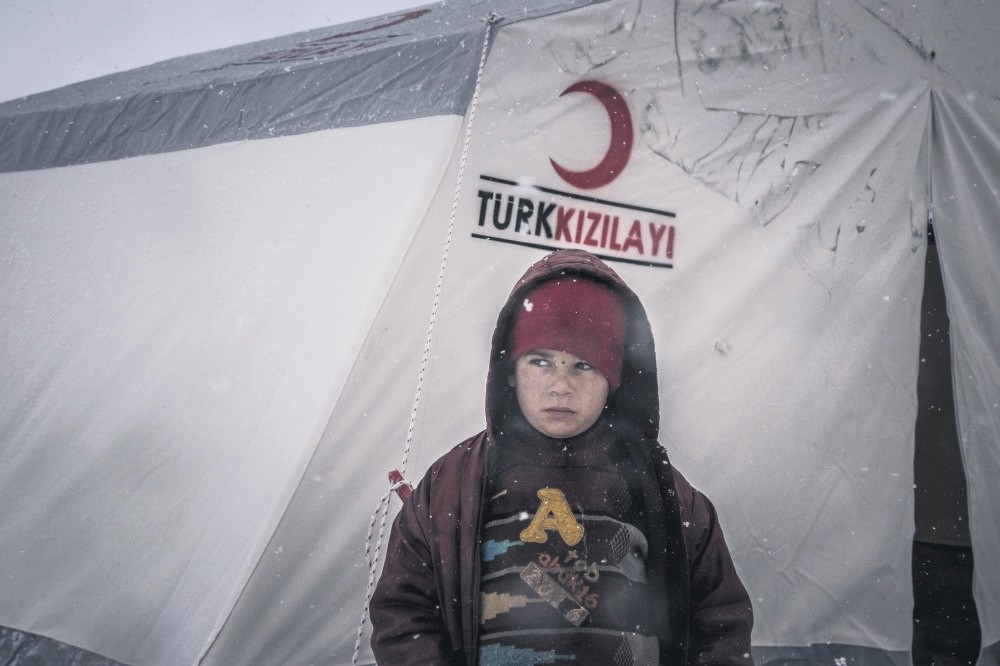 The Turkish Red Crescent, along with other Turkish NGOs, are currently working to set up a tent camp in Idlib where up to 20,000 Aleppo evacuees are expected to be settled in.
by Yunus Paksoy Dec 24, 2016 12:00 am

The evacuation process for the civilians trapped under fire from the Assad regime has been completed after intense joint diplomatic efforts by Turkey and Russia. The Turkish Red Crescent has set up a tent camp in the Kammunah region of rural Idlib for up to 20,000 civilians

Turkish nongovernmental organizations (NGO) have been stepping up their activities on the ground as well. Several NGOs have been actively participating in the delivery of urgent humanitarian aid to Aleppo evacuees.

The Turkish Red Crescent, along with other Turkish NGOs, are currently working around the clock to set up a tent camp in the Kammunah region of rural Idlib where up to 20,000 Aleppo evacuees are expected to be settled in. Daily Sabah visited the camp on Dec. 21 where there was already Aleppo evacuees waiting for food, beds, heating stoves and other basic needs in difficult winter conditions.

The Assad regime said on Thursday Aleppo's fall was "a victory" for the people of the city. The opposition had captured eastern Aleppo back in 2012 from the regime forces.

The regime has intentions to take full control of the remaining parts of the country from the opposition. It is feared that Idlib could be the next target for the Assad regime now that Aleppo has fallen.

While some of more than 40,000 people were welcomed by their relatives in and around Idlib, offering them a safe haven, many of the evacuees are expected to be brought to tent camps. As winter conditions get tougher for civilians, a new regime offensive against Idlib could create another humanitarian crisis.

Refugee camps in Idlib were previously targeted by regime airstrikes as well. At least 28 internally displaced people (IDP) were reported to have been killed in an airstrike on a tent camp in opposition-controlled Idlib in May. Even though the United Nations had said at the time that the airstrikes could account for a "war crime," no other report has come back so far regarding the attack.

The foreign ministers of Turkey, Russia and Iran met on Tuesday in a trilateral meeting. The joint declaration underscored the territorial integrity of Syria, saying: "Iran, Russia and Turkey reiterate their full respect for the sovereignty, independence, unity and territorial integrity of the Syrian Arab Republic as a multiethnic, multireligious, nonsectarian, democratic and secular state."

Though the three countries did not agree on a permanent cease-fire plan, they are set to kick off cease-fire talks in January, reports say. It remains unknown whether civilians that seek safe shelter in Idlib will be the target of regime and Russian airstrikes as they had been in Aleppo.