MHP leader Bahçeli to back new constitution bill, does not deny allegations of assassination attempts 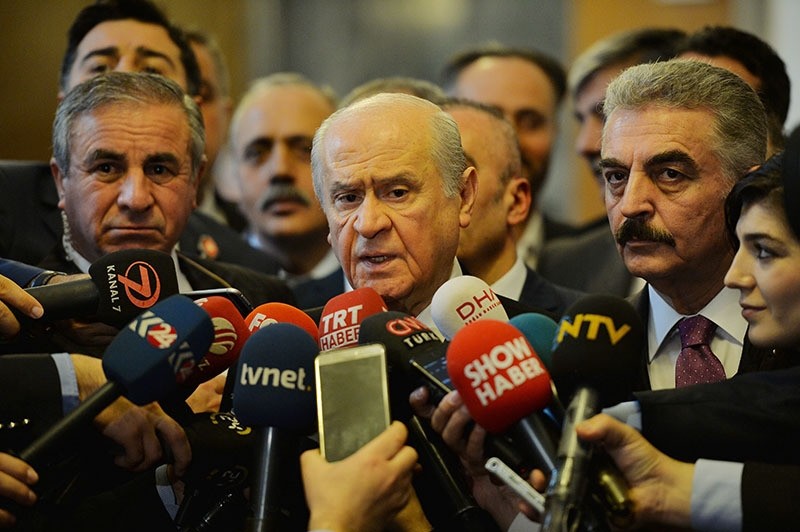 The leader of Turkey's opposition Nationalist Movement Party (MHP) said Tuesday he would back a parliamentary bill to change the country's constitution.

The move - the first open commitment to support the bill by the MHP leader - brings a potential change to a presidential system one step closer.

Responding to journalists' questions after a MHP parliamentary group meeting in Ankara, Devlet Bahçeli said: "I will give a Yes vote to the new constitutional bill and I will repeat it in the referendum."

However, it is not clear if all MHP lawmakers will follow their leader's move. The party has seen internal divisions since Turkey's November 2015 general election which saw it fall to fourth place in parliament.

The Turkish government has said it would put the constitutional changes to a referendum, even if the proposals gained enough support from lawmakers to pass through parliament.

The new constitutional bill needs 330 votes to pave the way for a referendum.

The AK Party has 316 seats and the MHP has 40 seats in the parliament.

Constitutional change - in particular, the call for a presidential system - has been on the political agenda since Recep Tayyip Erdoğan, the former prime minister and Justice and Development (AK) Party leader, was elected Turkey's president in August 2014.

That election was the first time a Turkish head of state was directly chosen by popular vote.

In the current parliamentary model, the Turkish electorate votes for 550 lawmakers. A government is formed by a minimum number of 276 members of parliament.