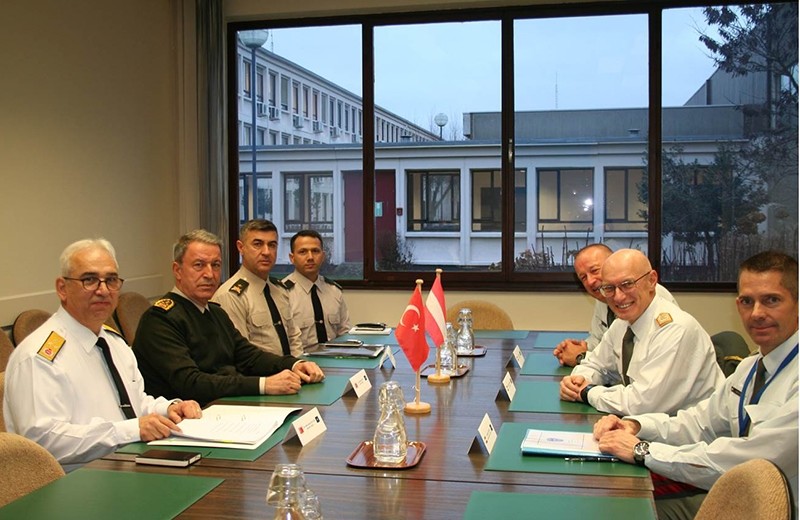 Chief of Staff Hulusi Akar (Second left) holding meeting with Austrian counterpart on the sidelines of a NATO conference in Brussels on Tuesday Jan. 17 (DHA Photo)
by Daily Sabah Jan 17, 2017 12:00 am

Chief of General Staff Gen. Hulusi Akar urged NATO to take more responsibility under the scope of counter-terrorism fight, and give concrete support to Turkey in this regard, the military said on Tuesday.

Attending NATO conference for chiefs of defense between Jan. 17 and Jan. 18 in Brussels, Gen. Akar urged the military alliance to provide more support amid increased global threat of terrorism.

Turkey has taken steps to crack down on Daesh since 2014 when the terror group launched a series of suicide bombings in Turkey.

It is currently carrying out Operation Euphrates Shield in northern Syria to clear terrorists from Turkish borders and ensure security.

Ankara has vowed that Operation Euphrates Shield will continue in Manbij and Afrin, which are both held by the PKK's Syrian offshoot, the People's Protection Units (YPG), after al-Bab is liberated.

The 176th Military Committee of Chiefs of Defense Session, which is considered a meeting of NATO's highest military authority is held in Brussels on Jan. 17-18.