Presidency tops poll as ‘most trusted institution’ in Turkey 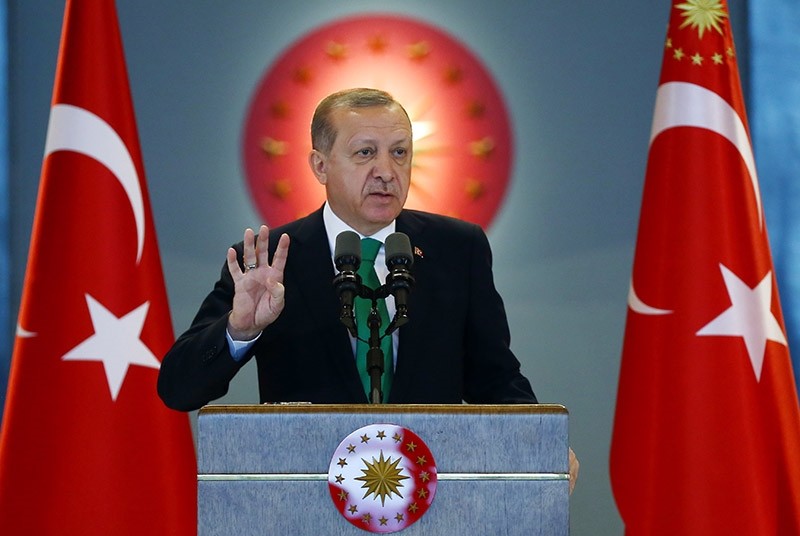 Turkey's Presidency has been chosen by the public as being the most trustworthy institution for the first time in a recent survey, overtaking the Turkish Armed Forces (TSK) after the botched July 15 coup attempt.

Presidency takes over as the most trustworthy institution

For years the answer to the question of "Which institution do you trust most?" was the TSK, with 62.4 percent of participants declaring their trusts. In 2016, the positive trust rate of the TSK dropped sharply to 47.4 percent, sharing second place with the police, which also saw a decrease from 51.9 percent to 47.4 percent.

For the first time, the Turkish nation declared that they have the most trust in their presidency at 49.4 percent with a slight increase from 2015's 46.9 percent.

The overall trust rate to institutions also fell significantly, with universities and NGO's losing their positive trust rates by more than half at 24.7 and 26.2 percent, respectively. Trust in political parties also sharply decreased, from 33.9 percent to 21.8 percent, while parliament saw an increase of 3 percent from 43 percent to 49 percent. The media came at the bottom of the list of trusted institutions, with only 15.1 percent saying they trusted the media, down from 27.8 percent last year.

Low trust to NGO's is a key determinant in explaining Turks' low participation to NGO's at 1.5 percent.

Turkey's biggest problem in 2016 was deemed to be terrorism by poll respondents at 35 percent, as it was in 2015. 25 percent of the participants defined the Gülenist Terror Group (FETÖ) as an equal threat as the PKK and DAESH.

For the first time in years the number of those who believe the government's fight against terror to be "successful" (35.6 percent) outnumbered those who found it "unsuccessful" (28.4 percent). Last year the latter figure was 45.8 percent.

Meanwhile, there was a slight decrease in the number of those who see Daesh as a threat, down to 76.1 percent from 78 percent last year.

Turkish citizens back the fight against the terrorist organization FETÖ and 71 percent of participants gave their full support to the continuity of the struggle.

The survey also touched on the public's attitude to the government's sweeping post-coup attempt measures. Some 59.8 percent said they supported the initial declaration of a state of emergency, while 48.5 percent said it should continue to be extended.

The percentage of the support for EU membership dropped drastically. While last year 65.1 percent of people supported the EU, this year only 45.7 percent were in favor of membership. The number of participants that think that Turkey could become an EU member dropped from 38.3 percent to 27 percent.

Ten percent said they believed Turkey should be governed as a presidential system in which the president remains the head of a political party.

Officials from Kadir Has University noted that the poll was conducted before recent parliamentary debates on the constitutional amendments and long before any prospective referendum campaign.

The survey also revealed a change in the public's attitude to the government's foreign policy, which 35 percent found successful and 33 percent found unsuccessful. The latter figure marks a drop from 41 percent last year.

For the first time in years, the number of people who find the Kurdish policy "successful" (33.8 percent) outnumbered those who find it "unsuccessful" (31.2 percent). Last year 40 percent of respondents said it was unsuccessful while this rate was 27.7 percent in 2014.