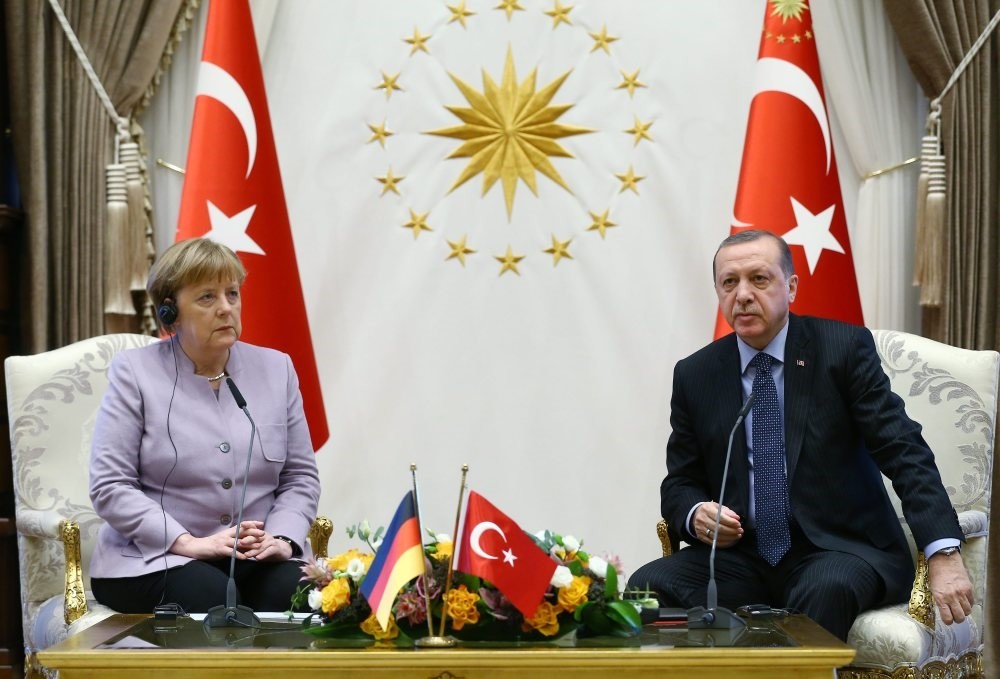 President Recep Tayyip Erdogan and German Chancellor Angela Merkel during their meeting at Beu015ftepe Presidential Complex in Ankara on Feb 2.
by Mehmet Çelik Feb 02, 2017 12:00 am

President Recep Tayyip Erdoğan urged Germany to take immediate action against FETÖ members in Germany, including the extradition of those being sought and asked to support Turkey in its fight against the PKK and Daesh terror groups

President Recep Tayyip Erdoğan urged Germany to take necessary steps against Gülenist Terror Group (FETÖ) members in the country, who are being sought by Turkey for their involvement in the failed coup attempt on July 15, during a press conference with German Chancellor Angela Merkel in Ankara Thursday. "When it comes to FETÖ, whatever the PKK and its affiliates, the Democratic Union Party (PYD) and its armed wing the People's Protection Units (YPG), are, FETÖ is the same," President Erdoğan said and criticized the German authorities for their lack of a speedy process in the extradition of the FETÖ members being sought by Turkey. "We've sent the U.S. 85 boxes of evidence and we are still waiting for a legal decision," Erdoğan said calling on the German authorities to speed up the legal processes as justice delayed is justice not served, also criticizing the U.S., where FETÖ leader Fetullah Gülen has been residing since 1999. Turkey officially submitted evidence to the U.S. in October 2016 regarding Gülen's network that formed a quasi-state within the Turkish state and attempted to topple the government with the intent to take over the state via a vicious coup.

Ankara has long criticized German authorities for their lack of support in Turkey's fight against terror. Followers of the PKK terror group, despite the group being listed as a terror organization by the EU and the U.S., have organized rallies across EU member countries as well as events against Turkey in Germany in the past.

"Germany is a country that has embraced both the PKK and the Revolutionary People's Liberation Party-Front (DHKP-C) terrorists – who create trouble for Turkey. They also host FETÖ-linked former prosecutors. Germany is also a country that has good economic relations with Greece. Thus, from our perspective, there is no difference between Greece's refusal of Turkey's extradition request for soldiers involved in the July 15 coup attempt, and Germany's refusal of Turkey's extradition request for PKK terrorists and FETÖ members," Deputy Prime Minister Veysi Kaynak said on Wednesday.

The PKK has been spreading through Europe for nearly two decades. In 2002, the European Commission officially classified the PKK as a terrorist organization. However, the PKK still enjoys great freedom under the protection of the EU. Ankara has repeatedly warned the EU of the PKK threat, but the EU continues to allow their activities. Thousands have lost their lives in PKK attacks across Turkey.

Between 2006 and 2016, Turkey demanded the extradition of a total of 136 PKK terrorists from Germany. The German government agreed to hand over only three of them to Turkish authorities, the Justice Ministry recently announced.

Speaking on Merkel's visit to Ankara, Ozan Ceyhun, a former member of the European Parliament, drew attention to the fact that Merkel needs Turkey's support due to the upcoming elections in Germany and therefore this dimension also should be taken account about Merkel's visit.

''Merkel is preparing for the elections in September, and Germany's Social Democrats have nominated former European Parliament President Martin Schulz to run against conservative Chancellor Merkel. There is a fierce competition in domestic politics, thus Merkel desperately needs to get Turkey's support on the refugee issue. Merkel might have a chance to increase her popularity if she gets a guarantee from Turkey about the refugee issue,'' Ceyhun said.

On July 15, a small military junta linked to FETÖ attempted to topple the democratically elected government of Turkey and impose martial law. Police officers and military officers loyal to the government along with millions of Turkish civilians managed to thwart the coup attempt in favor of democracy. A total of 248 people were killed – most of them civilians – and over 2000 people were injured.

Both Merkel and Erdoğan emphasized the need for cooperation against terror groups that have been posing a threat to both national and international order for Germany and Turkey, in particular the need for a political solution to the Syrian crisis.

The term 'Islamist terror' shouldn't be used in any context

President Erdoğan criticized those using the phrase "Islamic terror" when referring to the groups such as Daesh saying, "This phrase upsets us as Muslims. Such a term should not be used. Islam and terror cannot come together. The word Islam means peace. If we use such a term [Islam] in relation to the Daesh terror group, this would be upsetting. We have to oppose this term whenever it is used," Erdoğan said, amid the use of the phrase by Merkel.

Meanwhile, Foreign Policy Director of the SETA Foundation Ufuk Ulutaş also stressed the role of the upcoming German elections in Merkel's visit. ''There has been a significant drop in the number of refugees who want to go to Germany instead of Turkey after Turkey started to implement the refugee deal last year. Therefore, Merkel would like to maintain this deal to restore her credibility in domestic politics,'' Ulutaş said.

Adding that Islamophobia and racist attacks against the Turkish association and mosques are on the rise in Germany, Ulutaş said Turkey is going to raise this issue during the meeting with Merkel. ''Merkel will most probably give support in the fight against Islamophobia and will offer new assurances to protect Turkish associations in Germany. But most of these promises will not be kept due to upcoming elections,'' he said.

Responding to Erdoğan's comments, Merkel said Germany is doing its best in regards to Muslims' ability to practice their religion freely. "There is a difference between Islam and Islamist. We are aware of that," she added.

Merkel stressed that this was her first visit since the failed coup attempt on July 15 and added: "We have to be in close cooperation against all terror groups, including the PKK. We are also praising Turkey's efforts for integrating the refugees."

"Refugees are an important issue for both Turkey and Germany. I have stressed that the financial support promised by the EU should be delivered in a timely fashion," Merkel said.

During the meeting yesterday, bilateral relations, including defense, politics, economics, and terror related regional issues, were discussed. President Erdoğan also emphasized the importance of cooperation between Germany and Turkey, as there are 3 million Turkish citizens living in Germany.

Upon a question directed to President Erdoğan on whether the new constitutional system will negatively affect the separation of power, the president said the new presidential system will ensure that the powers are separated from each other and that the claims are baseless.

Merkel has visited Turkey five times in the last year-and-a-half. The two historic allies have had close bilateral relations, particularly on economic and trade related matters. In addition, Merkel's support to the migrant deal has also brought the two countries to closer terms. However, Germany's tolerance to the activities of the PKK followers, as well as the FETÖ members, has angered Ankara in recent days. Turkey also criticizes the lack of support from Germany in Turkey's fight against Daesh. Recently, a Reuters report claimed that the German military, part of the anti-Daesh coalition, had refused to share intelligence with the Turkish authorities during operations against Daesh in Syria. *Contributed by Ali Ünal from Ankara.
Last Update: Feb 02, 2017 8:42 pm
RELATED TOPICS