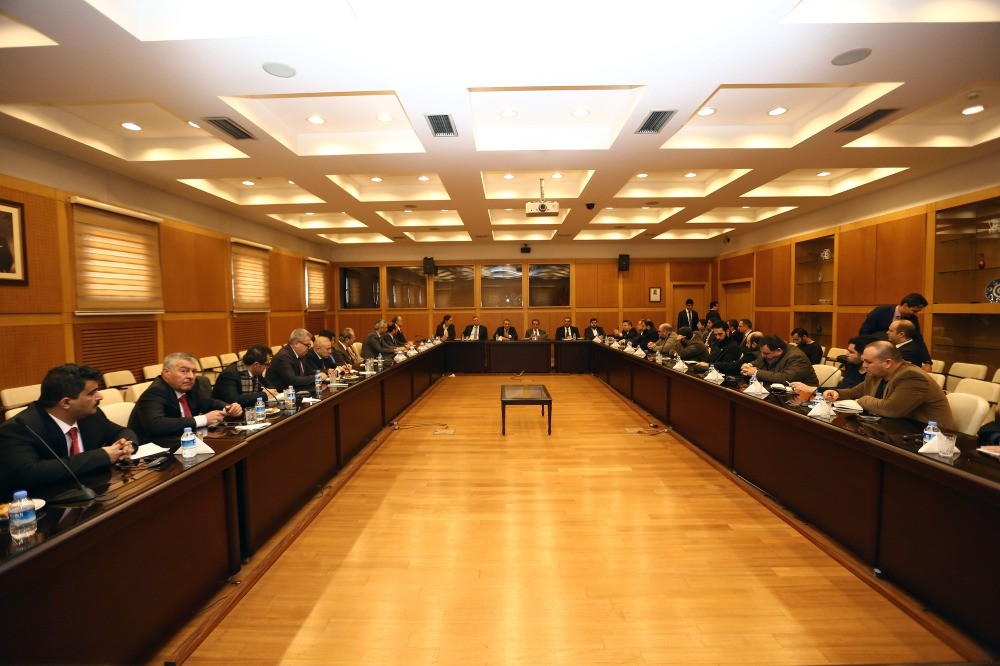 The representatives of the Syrian opposition groups came together in Ankara on Friday.
by Daily Sabah Feb 04, 2017 12:00 am

Representatives of the moderate Syrian opposition said they won't welcome groups that don't accept the territorial integrity of Syria in Geneva, underlining their commitment to finding a permanent resolution in the war-torn country

The moderate Syrian opposition reemphasized yesterday that any opposition group that does not accept the territorial integrity of Syria will not be welcomed in the upcoming Geneva talks, during a meeting hosted by the Foreign Ministry ahead of the Geneva talks in Ankara.

According to diplomatic sources, General Coordinator of the High Negotiations Committee Riyad Hijab, head of the Syrian National coalition Enes al-Abde, members of the Syrian Turkmen Assembly and the representatives of the armed opposition that signed the cease-fire agreement on Dec. 29 and representatives of armed opposition groups who attended the Astana talks last month participated in the meeting with undersecretary of the Ministry of Foreign Affairs Ümit Yalçın.

Diplomatic sources indicated that the outcome of last month's Astana talks and the issues related to the tripartite mechanism that was established to maintain the cease-fire were also discussed in the meeting.

The opposition forces underlined that the Syrian regime's violation of the cease-fire especially in the Barada valley and east Guta is unacceptable.

The Syria opposition also underlined their commitment to finding a permanent resolution in Syria in line with the United Nations Security Council Resolution 2254 that calls for a cease-fire and political settlement in Syria while stressing that talks about a new Constitution, autonomy, or federalism at this stage may harm the negotiation process.

Meanwhile, Turkey, Russia and Iran, the countries that brokered the Syrian cease-fire, will hold their first "Joint Operational Group" meeting on Monday in the Kazakh capital Astana with the attendance of representatives from Turkey, Russia, Iran and the U.N. The upcoming meeting will focus on establishing mechanisms to monitor a cease-fire and separating the extremist Jabhat Fateh al-Sham, formerly known as the al-Nusra Front, from the opposition, the Russian Defense Ministry and Kazakhstan's Foreign Ministry confirmed.

The al-Qaida-linked Jabhat al-Nusra, another name for the al-Nusra Front, announced it had split from al-Qaeda and rebranded itself as Jabhat Fateh al-Sham in July 2016. The United Nation's Special Envoy to Syria, Staffan de Mistura, will take part in the Monday talks in Kazakhstan, the country's foreign ministry spokesperson Anuar Zhaynakov stated on Thursday.

Following the Astana talks, the next round of negotiations are expected to be held between the government and the opposition in Geneva on Feb. 20.