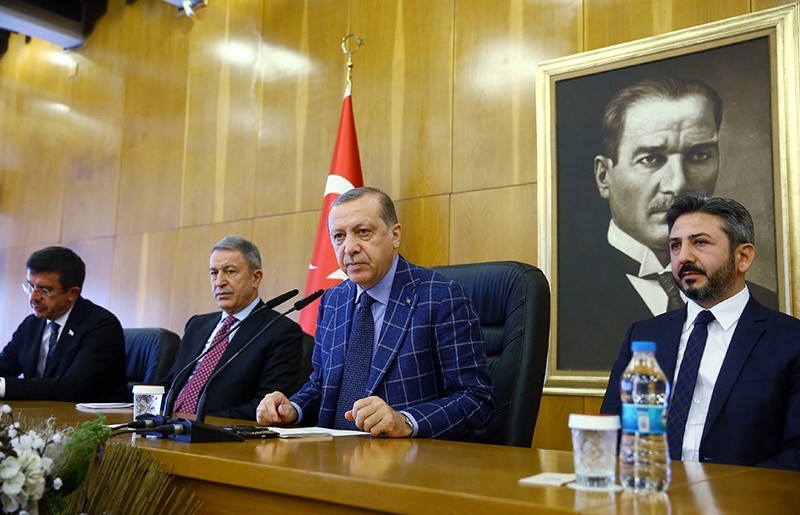 Reaction Tuesday continued to the contentious article that hinted at military discontent, which was published by Hürriyet on Feb. 25. President Erdoğan said on Tuesday that the headline, which translates to "[Military] Headquarters disturbed," was "shameless" and "rude." Speaking at a press conference in Istanbul before departing on a three-day visit to Pakistan, Erdoğan slammed the controversial headline.

"This title has also disturbed the Turkish Armed Forces [TSK] just like it has disturbed us. It is impossible for the TSK to not be disturbed by a matter that disturbs us. The TSK is an organ of the state," said Erdoğan, noting that a legal process was being launched over the title.

Hürriyet's headline, published just days before the anniversary of the military memorandum of Feb. 28, 1997, known in recent Turkish history as a "postmodern military coup," is reminiscent of previous headlines that have openly supported military intervention in the last decade. Recalling Hürriyet's headlines in past years that showed support for military coups, Erdoğan said that this is an old habit of the newspaper. "These are old habits, they are a thing of the past. Everybody should be aware of their position … You [Hürriyet] take it further and misbehave by saying that the president takes the chief of General Staff wherever he goes. No offence, but I don't consider this forgivable," he added, noting that it is natural for military chiefs of staff to accompany heads of state on their visits to foreign countries.

Contrary to general practice, Chief of Staff Gen. Hulusi Akar was also present at the press conference in civilian attire and an hour after Erdoğan's press conference, the TSK broke its silence about the Hürriyet report in a written statement, saying that the daily had distorted the facts.

The TSK said that a press member engaged in "slander" surrounding the armed forces and Gen. Akar, aiming to "cast a shadow on the TSK's fight for the country and the nation's security." The statement also said nothing was said along the lines of "the military is disturbed." "Presenting the issue as though there is tension between the TSK and the government is just distorting it [the reality]," the statement read, adding: "The TSK under the command of the state and the nation will continue its duty to ensure the security of our country with full determination."

The Hürriyet article, based on "anonymous" military sources, hinted that the "disturbance" occurred because officers were uneasy with the practices of the Justice and Development Party (AK Party) government, especially in the context of the latest reform that lifted a ban on female officers wearing headscarves in the armed forces. The report, which aims to intimidate the government, was also discussed in a Cabinet meeting on Monday.

Following the meeting, government spokesman Numan Kurtulmuş said that nobody can drag the TSK into politics. "The TSK cannot be dragged into politics; they are focused on their duty alone. Intimidating the government through headlines is no longer possible in Turkey. This is not the old Turkey," said Kurtulmuş on Monday evening.

Opposition Nationalist Movement Party (MHP) Chairman Devlet Bahçeli echoed the same view. Speaking at his party's weekly parliamentary group assembly, Bahçeli said that it is meaningless to start a discussion about the TSK while Turkey is embroiled in many problems. "The TSK should not be brought into politics and it is meaningless to discuss it while we have such problems and our national security is under such threat," he said on Tuesday.

Hürrriyet later issued a statement claiming their article was misunderstood and they had no intention of dragging the TSK into politics: "Bringing the military into politics and any effort that may be detrimental to our army is something every Turkish citizen should avoid. Having the military under civilian surveillance is an indispensable aspect of our democracy."

Even though the article was penned by Hande Fırat, the Ankara representative of Hürriyet, sources within the paper said that the headline and context of the article was changed by the Hürriyet editorial team in Istanbul. Amid the turmoil, the daily's Editor-in-Chief Sedat Ergin was reportedly fired by media mogul Aydın Doğan and replaced with former Milliyet Editor-in-Chief Fikret Bila.

In recent times, Hürriyet and the Doğan Media Group have published many headlines that provide examples of efforts to intimidate the government through news. One instance was in 2015, with President Erdoğan slamming a headline in Hürriyet, the flagship newspaper of the Doğan Media Group, for announcing Mohamed Morsi's death sentence along with a picture of Erdoğan. One of the headlines published on Hürriyet's website on May 16, 2015, was, "He was chosen with 52 percent. They sentenced him to death," along with a picture of Erdoğan, who became Turkey's first publicly-elected president with 52 percent of the vote.

Conflict between Erdoğan and the Doğan Media Group has continued for several years, since the beginning of Erdoğan's political career. A previous Hürriyet headline was: "He cannot even become a village headman," after a Turkish court sentenced Erdoğan to prison in 1998 on charges that he "incited the public to hatred and animosity" after reciting a modified version of a famous poem.

The Bakırköy Chief Public Prosecutor's Office on Monday launched an investigation into Hürriyet over its report. The investigation against the daily was triggered by a criminal complaint from an academic at Istanbul University, Mehmet Hakan Sağlam. In his complaint, the academic claimed that the news report suggests that the junta group within the TSK is still active, asserting that they should be found and punished on charges of attempting to destroy the Turkish government by the use of force.