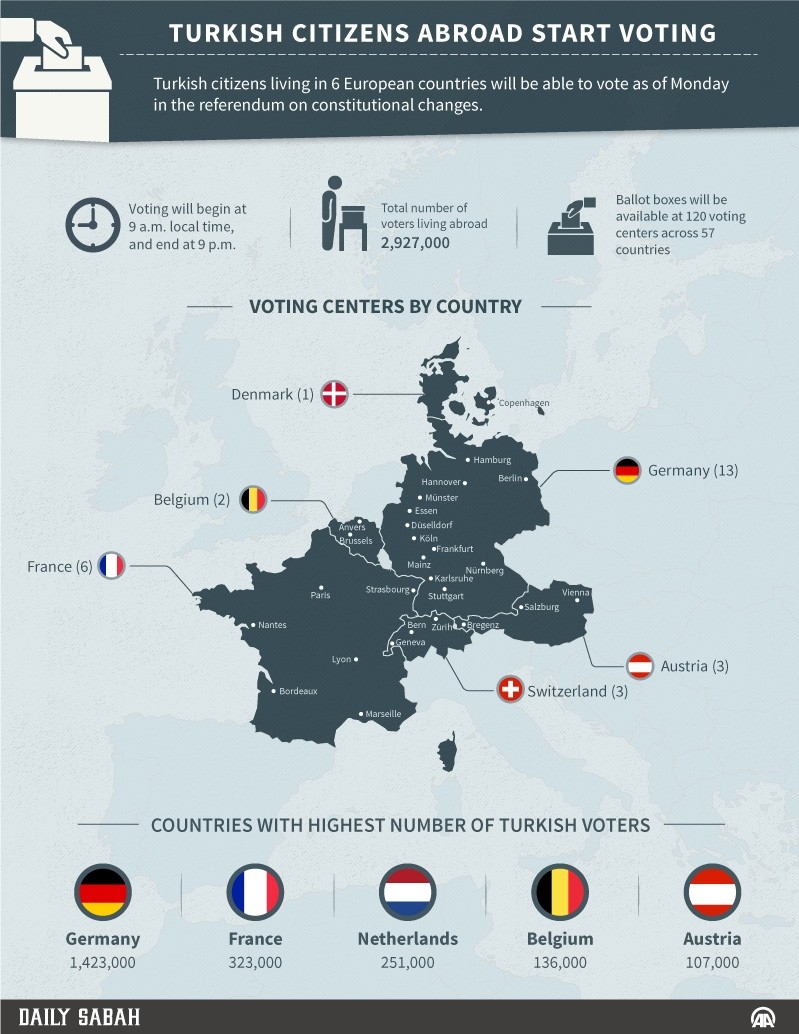 Turkish citizens living in six European countries will be able to vote as of Monday in the referendum on constitutional changes.

Turkish nationals in Germany, Austria, Belgium, France, Switzerland, and Denmark will be able to vote until April 9.

Nearly 3 million Turkish immigrants live in Germany, and about half are eligible to vote in the referendum on the proposed constitutional change for a transition to a presidential system of governance.

Turkish citizens will also vote in Austrian cities of Vienna, Salzburg and Bregenz, Belgium's Brussels and Antwerp, as well as Paris, Lyon, Marseille, Nantes, Strasbourg and Bordeaux in France.

In Switzerland, voting will take place in Zurich, Geneva and Bern and in Denmark at the Copenhagen embassy.

Around 3 million Turks living abroad who are eligible to vote in the referendum will vote in 120 Turkish missions in 57 countries.

Citizens in Japan, China, and South Africa will be able to vote at Turkish missions for one day only on April 9.

In the U.S., the voting process will start on April 1, in the United Kingdom on April 6, in the Turkish Republic of Northern Cyprus (TRNC) and the Netherlands on April 5, in Italy and Saudi Arabia on April 7 and in Greece and Russia on April 8.

At customs gates, voting will start on Monday and will last through April 16.

In Turkey, 55.3 million people who are eligible to vote will cast their votes on April 16.

The constitutional changes have been discussed since Erdoğan was voted president in August 2014. The 18-article bill was passed by parliament in January, with 339 votes in favor -- nine more than needed to put the proposal to a referendum.

The reforms would hand wide-ranging executive powers to the president and the post of prime minister would be abolished. The president would also be allowed to retain ties to a political party.

Other changes would see the minimum age for parliamentary candidates reduced to 18 and the number of deputies rise to 600. Simultaneous parliamentary and presidential elections for a five-year term would be held in November 2019 under the new constitution.