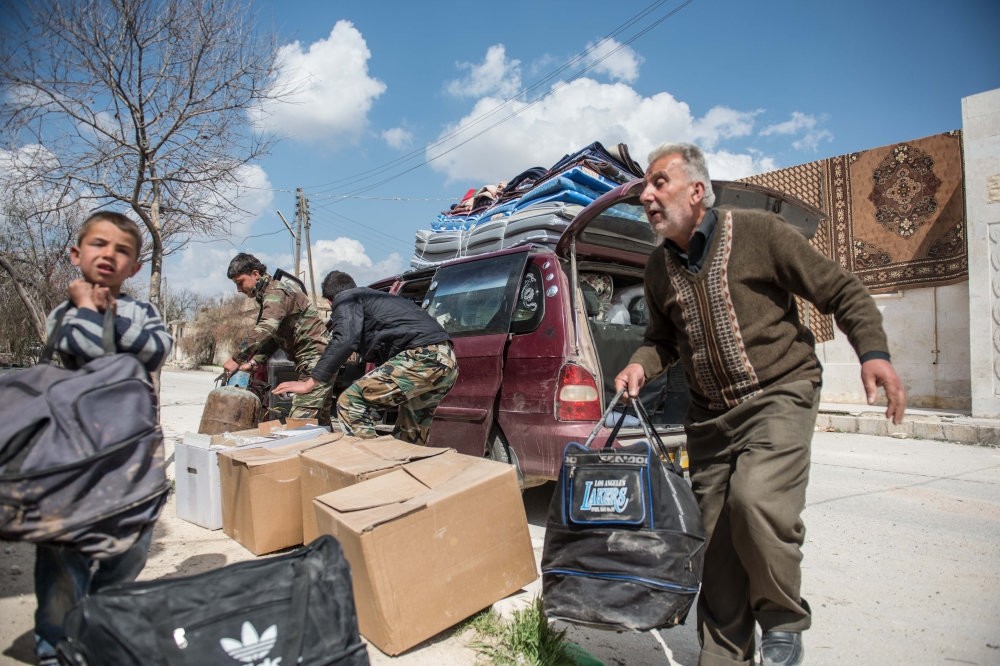 Members of the Khalil family returning to al-Bab as reconstruction process continue. (AA Photo)
by Mustafa Kırıkçıoğlu Apr 01, 2017 12:00 am

Operation Euphrates Shield was concluded after the liberation of Daesh-held towns in northern Syria. However, Ankara is not likely to take a back seat in the near future since terror threats from PKK-linked groups in the region and stabilization efforts in the liberated areas, continue

Ankara declared on March 29 that Operation Euphrates Shield, which was launched on Aug. 24 to secure Turkey's southern border, has "successfully come to an end."

The officials announced that more than 2,000 square kilometers (770 square miles) of land in northern Syria was liberated from Daesh, more than 2,500 terrorists were killed and that some 100,000 people living in the Gaziantep province are now expected to return to the liberated areas.

Since the initial goals of the operation were to drive Daesh away from the border, which was captured by the terror group after clashes with Syrian opposition groups in 2013, and to prevent the creation of a terror-corridor by PKK-linked groups in northern Syria, Turkey got its way and reached its primary aims.

In the end, the results are reflected in the statistics. Daesh terror attacks in Turkey, which had increased between July 2015 and August 2016 causing the deaths of nearly 300 people, drastically decreased after the operation was launched on Aug. 24, 2016. After that date, Daesh has only been able to carry out one terror attack inside Turkish borders.

The Turkish-backed Free Syrian Army (FSA) has not only gained ground by liberating the strategic towns of Jarablus, Dabiq — which it claimed would be the place of a doomsday war — and al-Bab, but it also created a secure and stable area for the return of locals who fled to Turkey due to Daesh atrocities.

The reconstruction of these towns continues and about 100,000 Syrians are to be relocated back to their hometowns. Additionally, Turkish humanitarian state institutions, as well as NGOs, helped to build and restore schools, hospitals and bakeries to meet people's basic needs in the region.

However, because of Turkey's officials' reiteration that the operation's next target would be Manbij, held by the PKK's Syrian offshoot, the Democratic Union Party (PYD), and the Daesh stronghold Raqqa, following the liberation of al-Bab, the announcement of the end of Operation Euphrates Shield was surprising for some.

The military operation is over, what's next?

Defense Minister Fikri Işık drew attention to the issue on Friday, saying, "The end of Turkey's military operation in northern Syria does not mean the threats are over."

He added that not all the goals have been reached by the operation. "As you know, the main goal of Euphrates Shield was to ensure permanent stability in the region, to prevent terrorist elements from establishing total dominion and to enable local residents to return to their homes and live there safely," Işık said. "The operation is over, but what needs to be done will continue to be done."

His words may lead to another operation in Syria in the future, even though he did not specify what may prompt Turkish forces to launch another cross-border operation.

Meanwhile, presidential spokesperson İbrahim Kalın said on Friday that the main aim of Euphrates Shield was the "eradication of the terror problem within the scope of Syria's territorial integrity," adding that Ankara is still interesting in completing its goals and even though the operation is over. He added that reconstruction efforts are continuing at full speed and that Ankara will also take necessary measures to keep stability."It is not easy to foresee the long term strategy of Turkey in northern Syria since the Operation Euphrates Shield Forces were stuck between other actors: Russia, the Assad regime and the U.S. on the ground," Dr. Bora Bayraktar told Daily Sabah, the International Relations Department at Istanbul Kültür University Department.

"In order to not deteriorate its relations with the U.S. and Russia, Ankara is not likely to carry out an offense in the PYD-held areas, Manbij and Afrin, where those two powers mingled with YPG forces," he added.

Earlier this month, the spokesperson of PYD's armed wing, the People's Protection Units (YPG), Redur Xelil, claimed that they had made an agreement with Russia on Sunday to set up a new joint military base, and that Russian troops had already arrived at their position in the northwestern province of Afrin with troop carriers and armored vehicles. Despite Moscow denying the claim, photographs that show military vehicles patrolling with Russian flags in the region have come to light.

The PYD uses the same method in Manbij, where it enjoys the protection of U.S. troops against possible operation of Turkey, despite the PKK being designated as terrorist organization by the U.S.

Bayraktar also said that Turkey is not going to "completely resort to diplomacy" after Operation Euphrates Shield, instead, it is likely going to have wait and see what unfolds. "The proxy wars can begin again during this time, not just in northern Syria, but also in regions like Hama and Aleppo," he said.