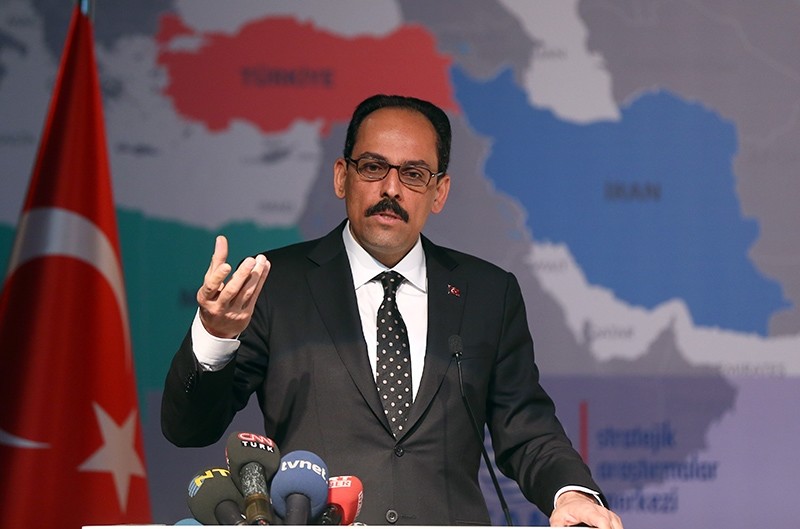 The attempts to portray terrorism as a phenomenon that only involves Muslims throughout the world is a serious problem manifested by a Euro-centric, biased perspective, Presidential Spokesperson İbrahim Kalın said Thursday, while he urged Muslims to avoid sectarianism.

Speaking at a symposium on north Africa, Iran and Turkey at Ankara Yıldırım Beyazıt University, Kalın said that it is unacceptable to claim that terrorism is only present in Muslim societies.

"The idea that Middle Eastern countries support terrorism is unacceptable," Kalın said, noting that terrorist groups such as Daesh target and harm Muslims.

He continued by saying that it is wrong to use terms "Islamic terrorism" or "radical Islam," saying that such terms sinisterly attempt to portray Islam as a violent religion that promotes violence.

Kalın added that the West avoids recognizing other terrorist groups, such as the PKK's Syrian offshoot, the Democratic Union Party (PYD), and the Peoples' Protection Units (YPG), as well as the Gülenist Terror Group (FETÖ).

"We need to question the hypocritical approach of the West," Kalın said, adding that it is not possible to get results if there are double standards regarding the fight against terror.

Meanwhile, Kalın urged Shia and Sunni Muslims to look at their common origins rather than their differences and being split by sectarianism.

"Shia and Sunni Muslims should remember that they were both fed from the same book, the same Prophet, the same persuasion and the same belief."

The centuries-old struggle between the two main strands of Islam has been highlighted by the conflicts in Syria and Iraq in recent years.

"We should establish this perspective in the correct way. I believe that Iran, particularity, has huge responsibility in this regard."

Kalın said regional powers should work to find common ground to allow people to live with their differences.

He highlighted the rule of former Iraqi Prime Minister Nouri al-Maliki, a Shia who held office from 2006 to 2014, as an example that should not be followed.

Maliki has been widely accused of forcing Iraq's Sunni minority into the arms of terror groups such as Daesh through the promotion of a pro-Shia agenda.