Turkey's struggle is not against ideologies, but terror groups, Erdoğan says 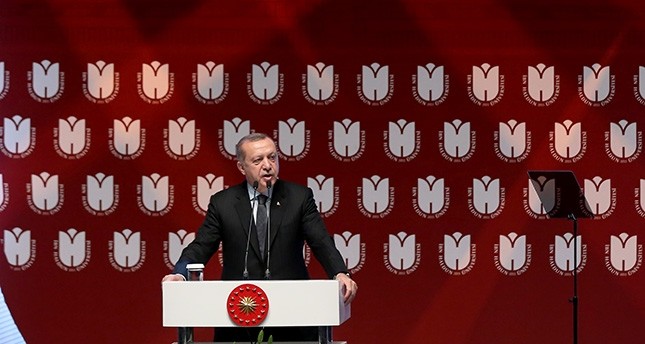 President Recep Tayyip Erdoğan said on Saturday that those who ostracized others based on their ideologies in the past in Turkey, are accusing the current Turkish government of being against the freedom of speech.

Speaking at the opening ceremony of Ibn Haldun University in Istanbul's Haliç Congress Center, President Erdoğan said that the government's struggle is against those who openly support and speak for terrorism.

Erdoğan said that no civilized country in the world would allow terror groups to nest in universities nor transform universities into training camps for the groups.

"Weapons, molotov cocktails and violence can never be a means to seek rights," Erdoğan said.

Turkey will ensure that any opinion can be freely discussed at universities, as long as it does not serve terrorism, he said.

Erdoğan also stressed that 14 years were spent countering ideologies which banned students from enrolling at universities based on their clothing and appearance.

"There are no longer any tearful students who are turned back from the doors of universities due their clothing," Erdoğan said.

Seeking to eliminate women wearing headscarves as well as men with beards from universities, faculty positions and public service, the postmodern coup of Feb. 28, 1997 targeted a large majority of the Turkish people and prevented them from being a part of the normal social life in the country.

The bans were lifted over the years with the struggle of the ruling Justice and Development Party (AK Party).