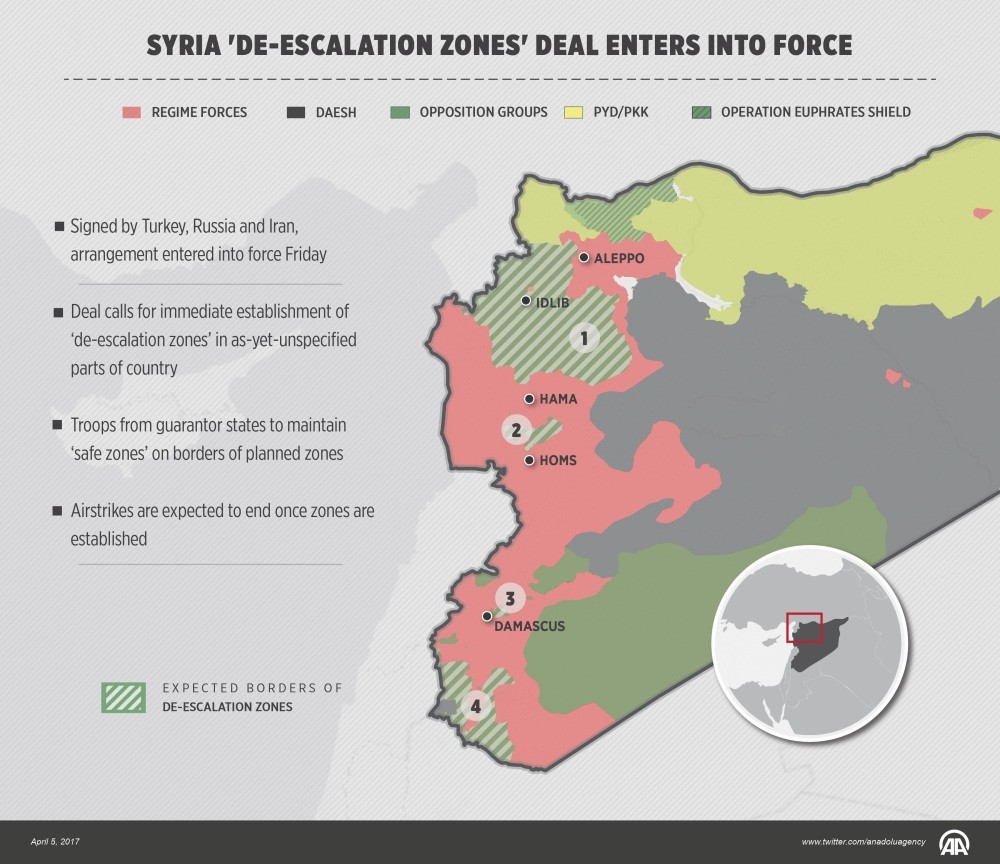 Following the signing of the memorandum on creating de-escalation zones in Syria by guarantor states Turkey, Russia and Iran at the Astana meeting, a trilateral meeting was held with delegations from the Turkish General Staff and Foreign Ministry at the National Intelligence Organization (MİT) as Turkey's roadmap and strategy in Syria were determined in the scope of the Astana agreement. The closed-door meeting held at MİT headquarters in Ankara lasted two days and addressed the mechanisms for implementing a cease-fire agreement and creating maps of de-escalation zones.

The ongoing Syrian crisis saw a breakthrough with the signing of a memorandum between Turkey, Russia and Iran during the Astana meeting on May 4 where de-escalation zones in Idlib, parts of Aleppo, Latakia, Homs, Damascus/Eastern Ghouta and parts of Daraa and Quneitra were discussed. Currently, the said zones only exist on paper and the co-sponsors of the agreement have until June 4 to finalize their proposed de-escalation zone maps under the terms of the agreement struck in Kazakhstan. In that respect, officials in Ankara held a meeting with the MİT, General Staff and Foreign Ministry officials Monday.

As Turkey's strategy and the road map for de-escalation zones in Syria were determined, the conditions for Iran's possible de-escalation measures, which could include giving Hezbollah the authoritiy to provide control and barring the opposition from having a possible guarantor role in talks, were also addressed. Ankara had also assessed four key de-escalation zones on a map of Syria and comprehensively discussed the details of armed groups on the ground.A control mechanism was also created during the trilateral meeting regarding controlling armed groups and taking measures for a possible conflict that may be created by these groups to halt the de-escalation agreement.

Under this control mechanism, the weapons of these armed groups will be the liability of whichever country the groups are affiliated with and they will act accordingly with those countries. Furthermore, according to the plan determined by Turkey, Idlib is to be controlled by Turkey while Turkey and Russia will jointly control the de-escalation efforts in Aleppo. Other regions such as Hama, Homs, some regions of Latakia and Eastern Ghouta in Damascus will be controlled by Russia. The rural areas of Damascus, which is predominantly controlled by Hezbollah, have been assigned under Iranian control.

Meanwhile, the May 4 de-escalation zone agreement envisages the halt of hostilities between Syrian regime forces and moderate opposition groups within the zones and the creation of conditions for humanitarian access, medical assistance, the return of displaced civilians to their homes and the restoration of damaged infrastructure. The guarantor states previously agreed to take all the necessary measures to continue fighting Daesh, al-Nusra and other groups both within and beyond the de-escalation zones.