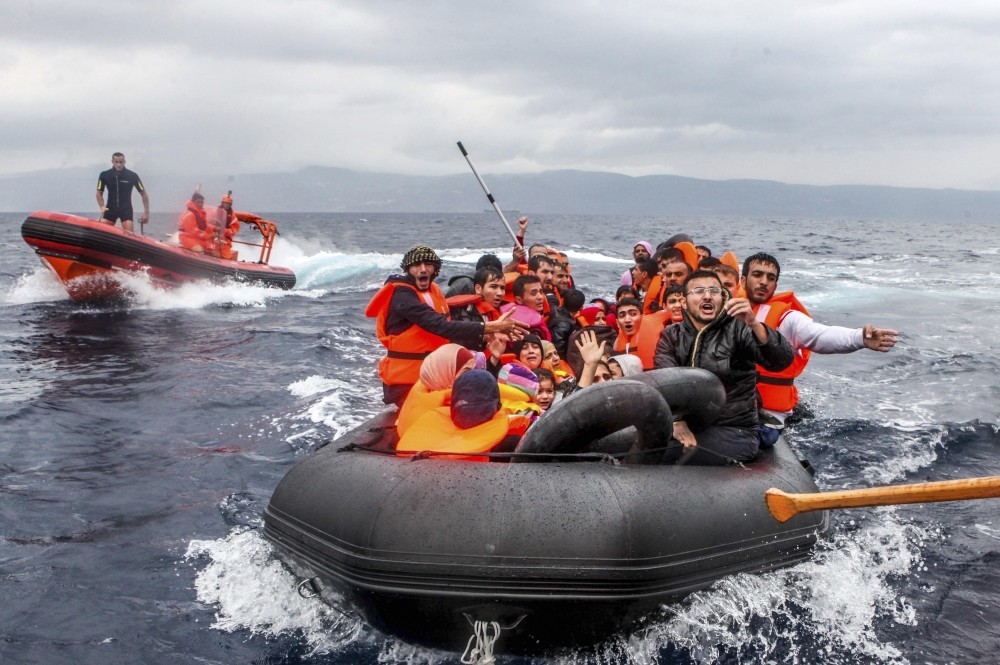 The Turkish government has responded to the increasing migration rate by rescuing nearly 135,000 migrants and refugees since 2015, while also continuing to take effective measures in response to the issue as thousands flee war in efforts to reach Greece, according to the United Nations Migration Agency (IOM). Among the measures being taken, vessels specifically designed for search and rescue operations were delivered to the Turkish Coast Guard (TCG) Thursday as part of a 20-million-euro agreement between the EU and the IOM.

The head of Turkey's EU delegation, Ambassador Christian Berger said: "The strenuous efforts [of the TCG] have been crucial in the saving of human lives in the Aegean Sea and the Mediterranean. The EU is proud to be able to contribute to the efforts of the coast guard with the initial delivery of two state-of-the-art search and rescue vessels today. Today, this project is a good example of what the EU and Turkey can achieve when we work together, showing that we are stronger when we are together," Ambassador Berger added.

The vessels provided today [to the TCG] are the first installment of six highly sophisticated search and rescue vessels paid for by the EU that the IOM will deliver by the end of 2017," IOM Turkey Chief of Mission Lado Gvilava said.

"While [the TCG] should be applauded for its efforts to rescue migrants and refugees, we must recognize that the underlying cause of what is driving people to make this risky journey continue to exist. The international community must come together to identify and eliminate the causes of irregular migration. In this context, the main driver is the conflict in Syria," Gvilava continued.

In addition to the six search and rescue vessels, the agreement with the IOM includes support for the TCG staff in conducting search-and-rescue operations and dealing with tragic events.

With this project worth 20 million euros, the EU will further strengthen its cooperative efforts with the TCG in the area of migration management. The project is being implemented by the IOM and foresees the production and supply of six search-and-rescue vessels to the TCG. The project also includes training on several topics, including international migration law, sensitive interview techniques, the providing of protection and assistance for vulnerable migrants, preventative measures against migrant smuggling and human trafficking. Furthermore, the project also offers support to TCG frontline officers to alleviate the psychological impact of their daily search and rescue operations at sea. The first two vessels were delivered to the TCG in Antalya on June 15, 2017. The four remaining boats are expected to be delivered by the end of this year.

In a bid to curb the refugee influx, Turkey and the EU signed a deal in 2016. They envisaged a "one-for-one" formula under which rejected asylum seekers in Europe would be returned to Turkey, while documented Syrian refugees would be resettled in EU member states under a quota system.

The agreement, backed by tighter coast guard patrols on the Aegean Sea to stop the illegal smuggling of immigrants, led to a significant decline in the number of migrants crossing the Aegean. The shores of the Aegean Sea were previously teeming with refugees waiting to board boats heading to the nearby Greek islands are now calm, save for the occasional group of illegal immigrants.