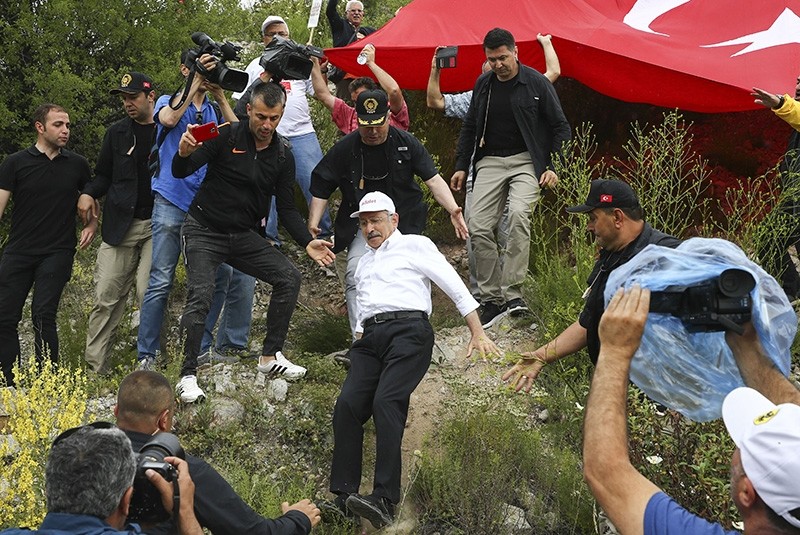 Despite an unexpectedly energetic start, misfortunes haunted Republican People's Party (CHP) chairman Kemal Kılıçdaroğlu's march on its fourth day, including a heart attack and severe injury that ended with a party member's death.

The day began near Kurtboğazı Dam located between Ankara's Kahramankazan and Kızılcahamam districts. Kılıçdaroğlu held a press conference and responded to Saturday's criticism of the "justice" march by President Recep Tayyip Erdoğan, who accused the CHP leader of violating the constitution and trying to pressure the judiciary.

"We are marching for justice, not against it," Kılıçdaroğlu said.

Shortly after the group began the march amid hot and humid weather, 65-year-old party member Hasan Tatlı suffered a heart attack, collapsed and took severe injuries due to head trauma.

Initial media reports suggested that Tatlı died from his injuries. A statement from the Health Ministry said that units in ambulances that followed the group initially responded to Tatlı suffering from cardiac arrest at the scene. He was rushed to the Kazan State Hospital and remained in critical condition.

Tatlı passed away early Monday despite all efforts to save his life.

Later in the day, 69-year-old Kılıçdaroğlu saw a group of people gathered to support the march on a ridge next to the Ankara-Istanbul highway. The CHP leader got off the road and went next to the group. While trying to descend from a steep ridge, Kılıçdaroğlu fell and drifted briefly before he was back on his feet with the aid of his bodyguards, luckily without any injuries.

Despite the unpleasant fall, Kılıçdaroğlu kept calm and the march resumed as planned.

Kılıçdaroğlu launched the 400-kilometer march from Ankara to Istanbul Thursday, a day after one of its deputies was given a prison sentence on espionage charges.