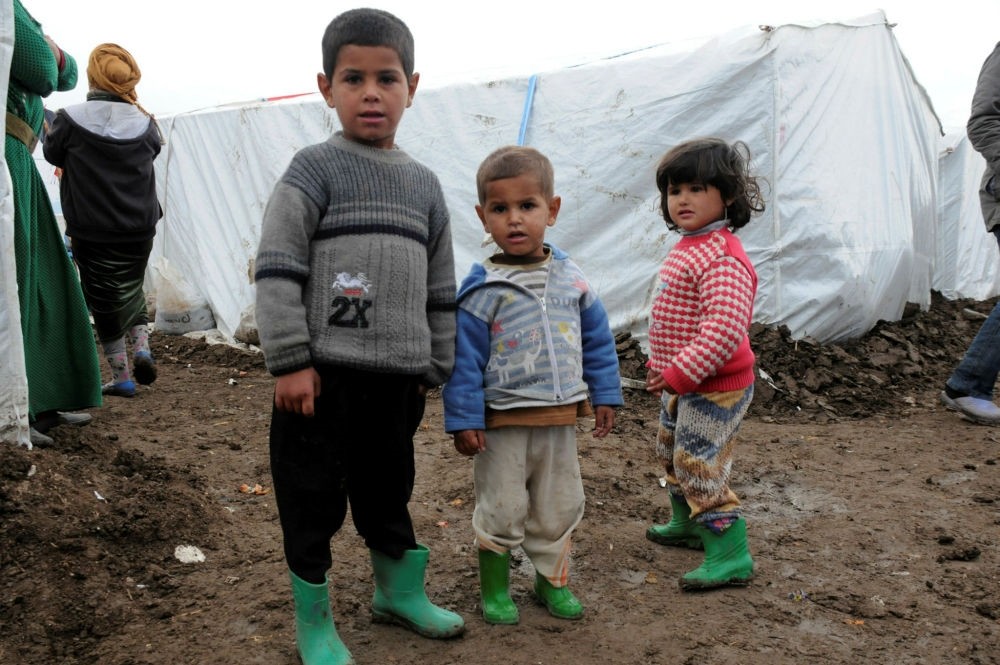 Turkey has taken in the largest number of Syrian refugees who have fled the ongoing civil war.
by Daily Sabah with Wires Jun 20, 2017 12:00 am

Turkey has the largest number of Syrian refugees worldwide, over 3 million, as the number of people uprooted from their homes due to devastating conflicts and violence hits the highest on record, the U.N. reports

Turkey, for the third consecutive year, has hosted the largest number of Syrian refugees worldwide, as the number of people displaced from their homes across the world due to war and persecution climbed slightly to a record 65.6 million last year, according to a new U.N. report released yesterday. Turkey has taken in the largest number of Syrians with a total of 2.9 million at the end of 2015. It has since exceeded 3 million, the United Nations High Commissioner for Refugees said.

This number accounts for around 45 percent of all Syrian refugees in the region, according to the U.N.

Turkey has spent around $25 billion helping and sheltering refugees during this time. Since the Turkey-led Operation Euphrates Shield to rid Syria's northern border area of terrorists, the Turkish government and many Turkish NGOs, including the Red Crescent, have been aiding refugees. This initiative has not only been taking place in Turkey, but tent cities have been set up in crisis-hit border areas inside Syria, along with distributions of food and other supplies. The Turkish Red Crescent's humanitarian aid has exceeded TL 2 billion (around $560 million) since the beginning of the Syrian civil war, according to the organization.

Syria's six-year civil war remains the largest single cause of displacement, with 12 million people — around two-thirds of the population — either uprooted within the country or fleeing abroad, the group said. They were followed by some 7.7 million Colombians, 4.7 million Afghans, 4.2 million Iraqis and 3.3 million South Sudanese.

The UNHCR's new Global Trends report on displacement said at the end of last year 300,000 more people than the preceding year had been displaced. Out of the 65.6 million worldwide total, 22.5 million are refugees, 40.3 million are internally displaced and 2.8 million are asylum seekers.

"Although these figures represent small shifts compared to the previous year ... the relatively stable figures mask a very unstable situation," agency chief Filippo Grandi said ahead of the official release of the report Monday. "This is becoming a forgotten crisis."

The figures released ahead of World Refugee Day showed that of the total, some 10.3 million people were newly displaced in 2016, around two-thirds fleeing within their own countries, according to an annual report by the group. The total refugee population — people who fled their home countries — was about 22.5 million people, and nearly half of those were children. In Germany, which vastly expanded its acceptance of people fleeing war from places like Syria, the number of refugees doubled to over 600,000 last year.

"This equates to one person becoming displaced every three seconds - less than the time it takes to read this sentence," the UNHCR pointed out in a statement. Most people who have been forced from their homes flee within their own country, and are defined as internally displaced people, or IDPs. At the end of 2016, there were some 40.3 million IDPs in the world, down slightly from 40.8 million a year earlier, with Syria, Iraq and Colombia accounting for the greatest numbers.

The UN refugee chief meanwhile voiced most alarm over the rapidly deteriorating situation in South Sudan, which he said was currently the world's "fastest growing refugee crisis and displacement crisis." South Sudan's civil war, which began in December 2013, has left tens of thousands dead and forced a total of 3.7 million people from their homes - nearly a third of the population.

Syria and South Sudan are far from the only countries where people are being uprooted en masse, with Monday's report also pointing to large-scale displacement in Afghanistan, Iraq and Sudan, just to name a few. And nearly 70 years after Palestinians first fled today's Israel, some 5.3 million Palestinians are currently living as refugees - the highest level ever recorded, the UNHCR said.

Monday's report also pointed out that, despite the huge focus on Europe's migrant crisis, it is poorer countries that host most of the world's refugees. A full 84 percent of refugees are living in low- and middle-income countries, the UNHCR said, blaming this "huge imbalance" on "the continuing lack of consensus internationally when it comes to refugee hosting and the proximity of many poor countries to regions of conflict."