Muslims in Germany annoyed by rally linking religion with terror 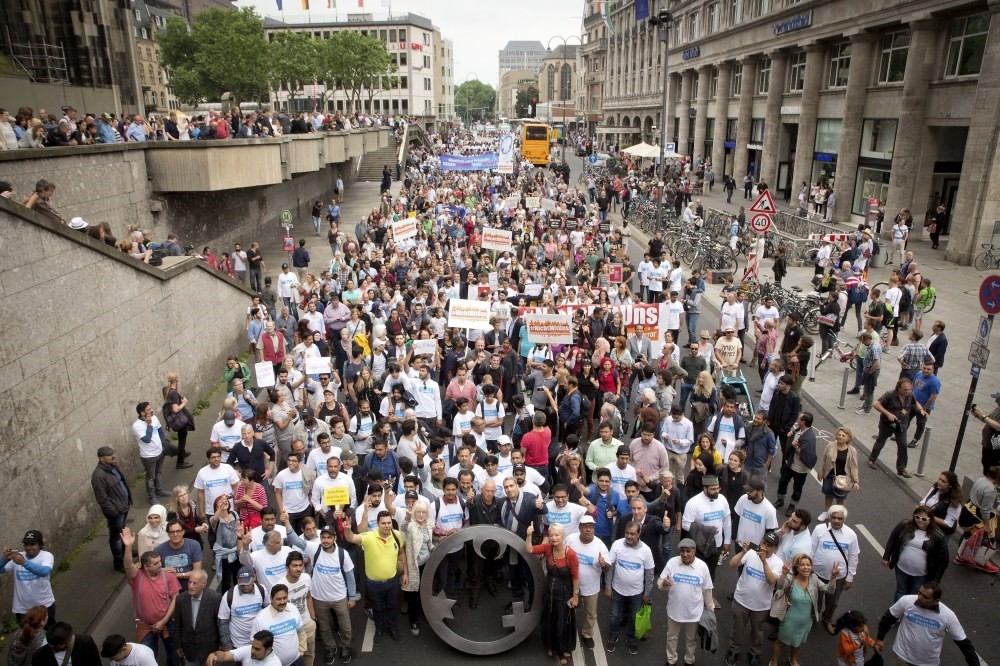 After the German government's criticism of Muslim Germans for not attending anti-Islamist terrorism protest, Ankara said it is not acceptable that Muslims are forced to take to the streets. Muslims in the country also express their disquiet at being forced to attend a one-sided rally and to see that Islam is tied to terrorism

A demonstration organized in the German city of Cologne over the weekend with the aim of uniting against "Islamist terrorism" failed to attract Muslims in the country, and the Turkish-Islamic Union for Religious Affairs (DİTİB) came under heavy criticism for refusing to lend support by not attending the event. The German government expressed frustration over the refusal of the DİTİB to attend the organization against "Islamist terrorism," saying that "it is simply a pity that the DİTİB did not take part at the rally." In the face of the German criticism, Ankara reacted to the pressure piled on German-Muslims by the German government as the chairman of the Turkish Parliament's Human Rights Investigations Committee, Mustafa Yeneroğlu, said that "everyone has the right to decide for themselves whether or not to attend such an event."

Condemning the move to force Muslims to pick a side over a rally against "Islamist terrorism," Yeneroğlu said: "It is completely a theater that they [Muslims] are oppressed in the name of freedom. I strongly condemn this."

In addition to the criticism of the DİTİB in the German media, Germany's Green Party co-leader Cem Özdemir of Turkish origin slammed the DİTİB for missing a chance to take a clear stance against terrorism. "The DİTİB has missed a chance with its spurious rejection to put out a joint statement with others against Islamic terrorism," he said.

Blasting the rally for stigmatizing Muslims, Yeneroğlu said that "it is not acceptable that Muslims are forced to take to the streets," and that "the DİTİB is lynched," in the German media. The much-debated rally barely attracted a couple of hundred people on the streets of Cologne. In the run-up to the rally, the publications and TV programs in the German media depicted a very different picture, increasing the expectations to tens of thousands of attendees.

German Interior Minister Thomas de Maiziere was not pleased with the number of attendees at the rally. Stressing that he would have hoped for the attendance of every Islamic union, Maiziere said: "The demonstration is an important sign of Muslims in society that they have nothing to do with the terror and abuse of their religion by the terrorists."

In addition, Muslims in Germany express their disquiet at being forced to attend a one-sided rally and to see that Islam is tied to terrorism. Fatih Zingal, vice chairman of the Germany-based Union of European Turkish Democrats (UETD), said that "it is not possible to think of any Muslim attending a demonstration that includes Islamist terrorism."

Feeling fed up with those who tie Islam to terrorism and extremism, Zingal said: "There is terrorism. There is no Islamist terrorism. Germans were not forced to take to the streets during the NSU trials."

Yeneroğlu continued his harsh criticism of the forced environment in Germany on Muslims. Calling the German government's actions "tyranny," the Turkish deputy said that Muslims display their anti-terrorism stance at every opportunity. "There is church and NSU terrorism in Germany. Should we call on all Christians to go onto the streets?" he asked.

German media outlets had been preparing the groundwork prior to the rally on Saturday. Bringing up the point that TV programs have been asking why Muslims have never organized such a rally so far, Zingal said that the German media is attempting to influence the perception of the society.