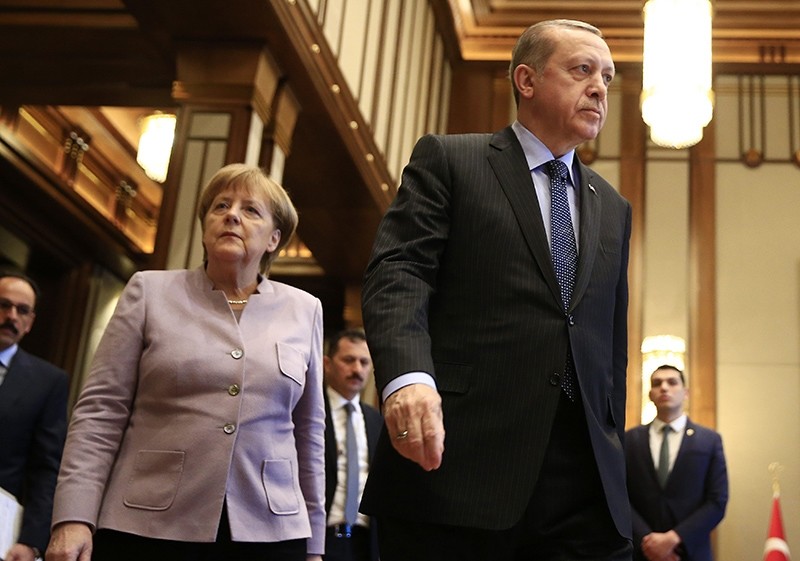 President Recep Tayyip Erdoğan criticized Germany for "committing [political] suicide" by not allowing him to address Turkish citizens in the country, and called on Germany not to sacrifice relations between the two countries for the sake of a terror group, ahead of the G20 Summit that will take place in Hamburg.

"… It is a problem that I am not allowed to share my thoughts with my citizens," Erdoğan said, adding that he will not be silenced.

He also drew attention to rooted relations between the two countries, as well as the trade volume, which stands at more than $35.5 billion, and said, "If the German government wishes to sacrifice our relations for a terror organization, that would be a huge mistake."

"We have always wanted to maintain our good relations with Germany, and we still want to. We need each other. We must preserve that," he said.

Erdoğan said that Germany should not protect and give shelter to high-ranking perpetrators of the failed July 15 coup attempt who are members of the Gülenist Terror Group (FETÖ), adding that Turkey has sent over 4,500 files regarding the issue that "contain all the evidence."

Responding to a question concerning the reason for the high number of discharged civil servants due to their connections to FETÖ following the coup attempt, around 100,000 (approximately three percent of all civil servants), Erdoğan pointed out that 500,000 people lost their job when East and West Germany reunified.

The president also said, "There is no animosity between the chancellor and myself," but criticized some German politicians' biased attitude towards him. "Look, ahead of the referendum, German parliamentarians threw their complete support behind the 'No' campaign," he said.

Erdoğan added that relations were much friendlier with the SPD's predecessor, Gerhard Schröder, and said that Martin Schulz's approach to Turkey caused him to lose the support of Turks in Germany.

"Relations with Schröder were really quite different. They were very good. I hope that we can return to that. Mr. Schulz's approach is ideological. It isn't clear when he does what. They want to score points domestically by instrumentalizing our relations, but they are losing. And I think they are also losing support from Turks in Germany in the process," he said.

German-Turkish relations have been strained over the past few months after local German authorities canceled public appearances by Turkish ministers and government officials campaigning ahead of the April 16 referendum in several German towns and cities. The cancellations were based on reasons such as the inadequacy of parking lots and security concerns, while at the same time, allowing pro-PKK events and Turkish opposition officials to rally against the referendum.