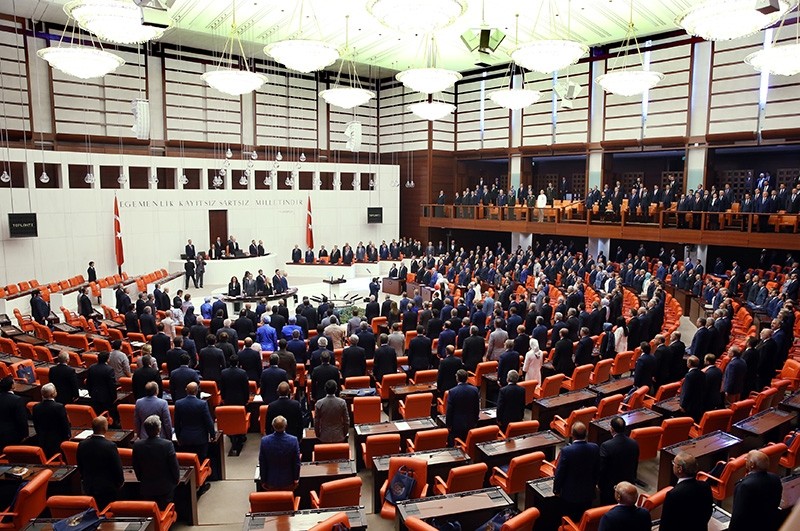 | AA Photo
by Daily Sabah with AA Jul 15, 2017 12:00 am
The Grand National Assembly of Turkey (TBMM) held a special session to commemorate the July 15 failed coup attempt on the anniversary of the putsch bid, attended by all political parties.

Parliamentary Speaker İsmail Kahraman made the opening speech, in which he highlighted Turkey's determination to protect democracy, and come together amid threats to its unity.

The speaker said he immediately convened the general assembly of the parliament despite the bombing by FETO members.

About the lawmakers who attended the historic session on the coup bid night, he said: "All of us, the entire parliament was [July 15, 2016] Sütçü Imam and Nene Hatun."

Sütçü Imam, also known as Uzun Oluk, was the leader of the first alleged armed action against the French occupying forces in Turkey's Maraş province Oct. 31, 1919.

Nene Hatun played an important role for the salvation of Erzurum province from Russian army at the start of the Russo-Turkish War of 1877-1878.

More than 7,000 military personnel have been dismissed from the Turkish Armed Forces over suspected links to FETÖ since the defeated coup.

President Recep Tayyip Erdoğan also attended the session, and is expected to address the parliament at 2.32 a.m., the time the parliament was bombed on the night of the coup attempt.