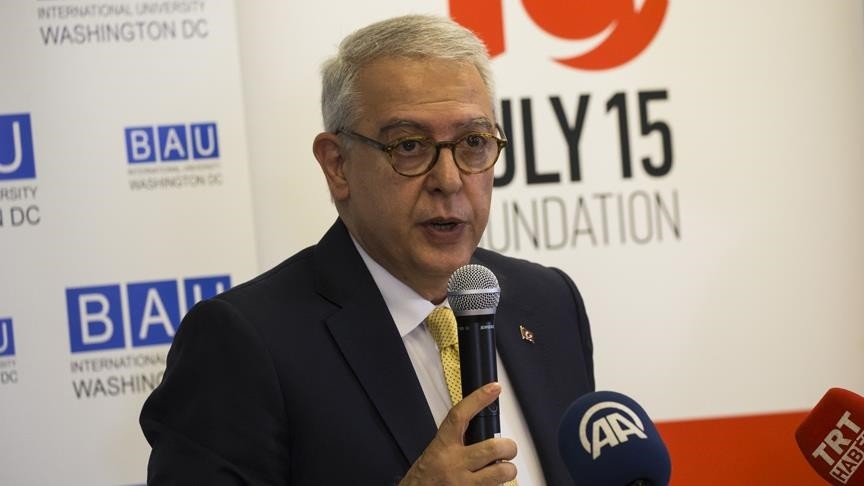 The U.S. media failed to address last year's defeated coup attempt in Turkey, which was the country's 9/11 and the heroic actions of Turks on that night, Turkey's ambassador to Washington said Friday.

"When a Chinese man stood in front of the tank at Tiananmen Square in China, he was introduced as a hero of democracy for many years," Serdar Kılıç said at a news conference at the Turkish embassy where Anadolu Agency opened a photo exhibition of the July 15 coup attempt. "Did you see any footage in the U.S. media about the Turkish people, who laid under the tanks on the July 15 terrorist attempt?"

Kılıç referred to the coup attempt as a terrorist attack, and said it was no different than the 9/11 terrorist attacks, which took place in the U.S. He urged U.S. authorities to take action against FETÖ supporters in the country, who present themselves as activists and educators to carry out their activities.

The Gülenist Terror Group (FETÖ) led by Fetullah Gülen, is accused of plotting to overthrow Turkey's democratically elected government with a campaign that managed to infiltrate the country's institutions, including the military, police and the judiciary.

Kılıç said authorities have been working to eradicate FETÖ's network and when he was asked when Turkey would lift its state of emergency that was implemented following the overthrow attempt, his retort was whether the same question was asked of France that has been under a state of emergency since terror attacks there in 2015.

"France has declared state of emergency due to terror attacks, but Turkey was attacked by helicopters and aircrafts operated by military officers who were getting orders from FETÖ," Kılıç said.

"This is not a crackdown, purge or anything. This is a fight for our democracy and freedom," Kılıç said as he urged the media to accurately describe steps the Turkish government has taken after the coup attempt that left 249 dead and nearly 2,200 injured.

Kılıç said President Donald Trump's administration takes Turkey's extradition request for Gülen "more seriously" than former President Barack Obama, but there is not any sign of when it would decide what to do with Gülen.