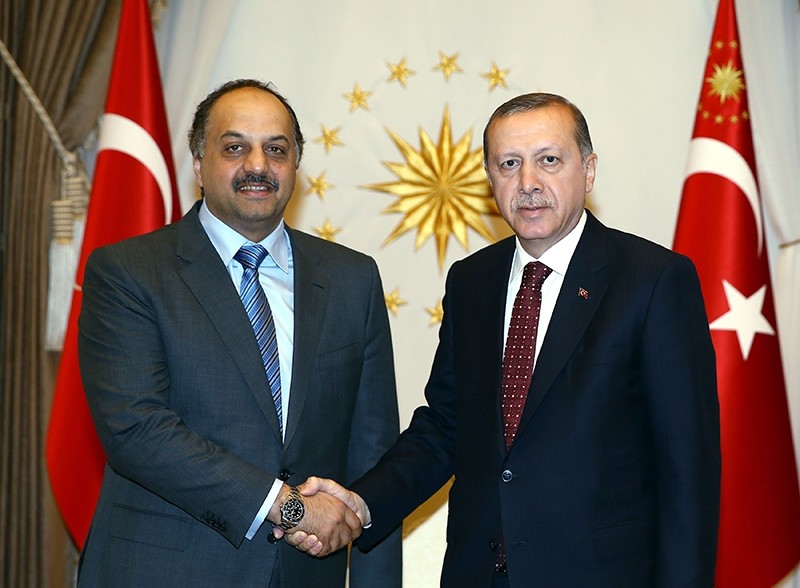 Qatari Defense Minister Khalid bin Mohammed al-Attiyah (L) shakes hands with President Recep Tayyip Erdou011fan at presidential complex in Ankara, Turkey. (IHA Photo)
by Daily Sabah Jul 25, 2017 12:00 am
Qatari Defense Minister Khalid bin Mohammed al-Attiyah said that the emirate will conduct a joint military drill with the United States and Turkey in the coming days, and that the crisis has not affected ties with Washington.

"I have particularly put intensified efforts in establishing sustainable and transparent ties with Turkey and the U.S. I do not think that the U.S. will give up on Qatar in counterterrorism cooperation, as both countries are in a state of being ally countries in anti-Daesh coalition. Qatar, Turkey and the U.S. regularly conduct military drills in Qatar. In the near future a joint drill will begin by the three countries," he said.

"U.S.-Qatari relations are strong," Attiyah added, also ruling out the relocation of the Al-Udeid U.S. military base from Qatar.

"So good to see the Saudi Arabia visit with the King and 50 countries already paying off. They said they would take a hard line on funding extremism, and all reference was pointing to Qatar. Perhaps this will be the beginning of the end to the horror of terrorism!" Trump wrote on Twitter.