Venezuela recently experienced a coup attempt by troops supported by the U.S. according to the government, and it seems that things are not going to be calm in Venezuela for some time. The reason why this oil-rich country became a threat for the U.S. is President Nicolas Maduro standing up against the global war machine, criticizing the judicial coup against Brazilian President Dilma Rousseff and, most importantly, signing treaties with Iran and China.

Even after open threats of military intervention by the U.S., the country stands strong against these pressures and naturally got a lot of support from Turkey. It should be kept in mind that the Venezuelan High Court assumed the authority of Congress on March 31, stating that Congress had disobeyed the High Court. The opposition called on the people to protest in the streets, claiming that this decision was against the separation of powers and that it would turn the country into a dictatorship under Maduro.

Since there are the same types of foreign-backed calls to protest chanting dictatorship in Turkey as well, we can easily see that Maduro and Venezuela are in the right. It is very honorable that Turkey supports a country that is 10,000 kilometers away. 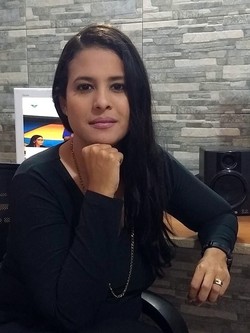 Understanding this, I want to discuss what exactly is going on in Venezuela with one of the most important journalists in the country, Erika Ortega Sanoja. She is known as having been very close to former President Hugo Chavez. What is interesting is that she says that the American media denounces her country with made up news. There was a coup attempt in Venezuela, and ever since, the country has not been able to calm itself.

Can you tell us about what is happening in Venezuela right now?

The coup in Venezuela goes back to 1999 when Chavez was elected president of the country. It was the biggest voter turnout in the history of the republic. Since that very moment, the imperialist forces of the United States have tried to overthrow him. They succeeded on April 8, 2002, when they managed to remove him from the presidency for 48 hours after a coup just like the one that recently happened in Turkey.

I don't know the exact reasons behind what happened in Turkey, but I do know that in Venezuela it was the U.S. that ordered the Venezuelan opposition to carry out this coup. This coup was foiled thanks to the civilian-military union that was built in Venezuela ever since Chavez rose up together with a group of rebels in 1992 (editor's note: through a coup). Since then, there have been many attempts to remove Chavez from the presidency. I think they were only able to do it by getting him sick, which cost him his life.

Commander Hugo Chavez himself questioned whether his sickness was natural or not. He asked the revolutionary forces to vote for current President Maduro. Since that very moment, the right wing in this country has tried to overthrow him. Eleven people died on the day of the election in April 2013; two of them were under 18 years old. The U.S. had to act to prevent him from materializing his rise to power. So they started an economic, financial and geopolitical embargo against Venezuela. In this new stage, everything started with the call for soft power by the democrats. By declaring Venezuela an unusual and extraordinary threat, President Barack Obama was actually ordering that Maduro be overthrown. This policy of economic difficulties was continued and went further with Donald Trump in the White House.

How did the opposition work with Washington?

Maduro decided to summon this National Constituent Assembly when he tried every single possible way of a dialogue with the opposition. The negativity of the opposition representatives and leaders against sitting down for dialogue and their decision to call their followers to the streets ended up with more than 100 people murdered during more than 120 days of street violence, as I mentioned before. Many unprecedented things happened in Venezuela during this period.

Can you go into detail about these unprecedented things?

The opposition and their mercenaries burned some people alive. They murdered many others. Some government security bodies have broken the norm of not using firearms on protesters, which is established in the constitution. This was condemned by Maduro himself in spite of the great violence demonstrated by the opposition. All security personnel who have broken this regulation and attacked protesters in an illegal way have been arrested and prosecuted. The same has not happened to protesters who are responsible for the violence since the person charged with their prosecution is now on the side of the opposition. Her name is Luisa Ortega Diaz, and she was the attorney general of the Republic until the National Constituent Assembly elected somebody else named Tarek William Saab.

After the coup attempt, how do the people see Maduro's government?

There's a part of Venezuelan society that doesn't like him, but a great majority supports him. It was demonstrated in the election of July 30 where more than 8,000,000 (out of approximately 19,500,000) people voted in favor of the National Constituent Assembly. It's not true that all Venezuela hates him like the global press says. They always kept Chavism in the shadows since the rise to power in 1999. The Bolivarian Revolution is a popular nationalist force with deeply democratic roots, and it's ultimately based on Bolivarian socialism of the 21st century, which was founded by Chavez, who was inspired by the ideas of the liberator Simon Bolivar. Without doubt, it's undeniable that the financial siege, the economic blockade and the other difficulties that were forced on Venezuela by the U.S. have had consequences. So the biggest challenge of the Bolivarian Revolution and its leaders is to make the Venezuelan people understand the real causes of the current situation. The people of Chavez are clear on who's responsible. Sadly, there's a part of the population that still isn't the majority that don't realize that their murderer is the very same U.S. that they love.

What I understand from what you're saying is that Venezuela is falsely represented in the American and European media.

Lies are being said about Venezuela every single day because there are incalculable natural reserves here. We have the biggest oil reserves in the whole world. There's coltan, iron, bauxite, gold, diamonds, water, biodiversity, gas and torium. We're also three hours away from the United States. It makes us appealing to North American imperialism. No empire was able to put Venezuela down. The liberator Simon Bolivar who liberated five nations of our America came from this land. This genetic burden is in our blood and we'll be worthy of it.

Trump said that a military intervention is possible, what do you think about that?

The imperialist U.S. government is capable of anything. They invaded Panama, they launched a coup against the martyred president of Chile, Salvador Allende. With false reasons they have gotten involved with Afghanistan, and they have destroyed Iraq. They are behind every single action committed against the peoples of the world. I have no doubt that they would be able to act against my homeland. As I have said, there's no doubt that their plans have been foiled here by their own weight. Among other reasons why their plans here were foiled there's an entity that is too powerful: The civilian-military union. This union made the U.S. bite the dust here. It's the same thing that defeated the imperialist forces in the Bay of Pigs. Venezuela will win and the legacy of the liberators will grant us victory. Chavez gave us a clear, powerful formula that would make us overcome any type of difficulty before he passed away: "Unity, struggle, battle and victory." We firmly believe in this.

I believe that all peoples of the world are friends of Venezuela. Governments are another thing. I know that President Maduro visited Recep Tayyip Erdoğan and that he talked about the similarities between the coup of April 11, 2002, and the one that happened recently in Turkey. In all cases, Bolivarian Venezuela is loved by the peoples of the world thanks to Chavez's efforts to create a multi-center and multi-polar world against the U.S. government, which pretended to become the world leader after the fall of the Berlin Wall.

How do you see the future of Venezuela? Do you think that the relations between Turkey and Venezuela will get stronger?

After all that's happened, I think that Venezuela and the Bolivarian Revolution are stronger. And I fervently wish that the peoples of the world could express their solidarity against this attack we're going through. Yesterday it was Afghanistan, then Iraq, after that it was Libya, Syria, Ukraine, and today it's Venezuela, tomorrow it could be any other country. When the peoples of the world figure out this reality and the necessity to create a multi-center and a multi-polar world, where people's self-determination is actually respected, we can be a planet with more equality, balance, justice and not so many wars. Peace for Venezuela, peace for the Middle East and peace for the noble world. I hope that I'll be able to travel to Turkey to visit Ankara and Istanbul. It really is an old culture that we admire and adore in Latin America. The recent start of the direct flights made us think that maybe in the not-so-far-away future, we would be able to come together with this people, which carries the holy fire of history just like we do. I'm grateful for your solidarity by allowing us to talk about the situation in Venezuela, which is kept hidden from people by the transnational media community because they only serve the interests of Washington and the global war machine.