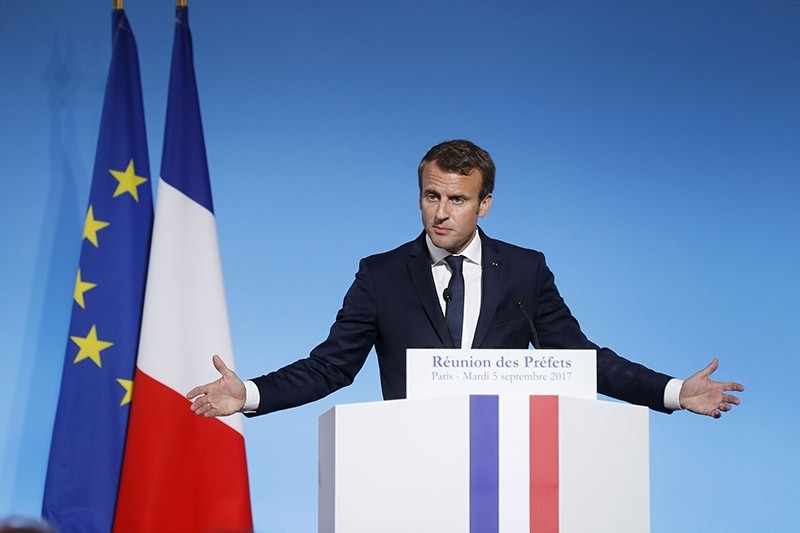 French President Emmanuel Macron delivers a speech at the Elysee Palace in Paris during the Prefects Reunion on September 5, 2017. (AFP Photo)
by Daily Sabah with AFP Sep 07, 2017 12:00 am

The European Union must avoid any break in relations with Turkey, an "essential" partner on migration and terror issues, French President Emmanuel Macron said while beginning a two-day visit to Greece on Thursday.

"I wish to avoid a rupture because (Turkey) is an essential partner in many crises we jointly face, specifically the migration challenge and the terrorist threat," Macron told the Kathimerini newspaper.

The 39-year-old centrist also said that Ankara had "objectively distanced itself" from the EU in recent months, citing Turkey's desire to enter into a customs union with the EU as a possible area of retaliation.

The EU and Turkey last year entered into an agreement which helped stem the flow of hundreds of thousands of refugees and migrants into Greece.

He is also scheduled to deliver a speech in the evening at the Pnyx, the hill opposite the Acropolis that served as Athens's parliament in antiquity.

The comments from the French president followed ones on Sunday in which German Chancellor Angela Merkel said talks on Turkish membership of the EU should be halted.

Ties between Turkey and EU members have been strained since the July 15 failed coup attempt, as Ankara repeatedly slammed European countries for failing to show solidarity with the Turkish government against the Gülenist Terror Group (FETÖ), which orchestrated last year's deadly coup attempt, and providing asylum to Gülenist coup plotters.

Up to 250 fugitive diplomats and soldiers with links to FETÖ have reportedly been granted asylum in Germany.

Germany, Belgium, the Netherlands and several other European countries have also been accused by the Turkish government of turning a blind eye to outlawed groups and terrorist organizations hostile to Turkey.