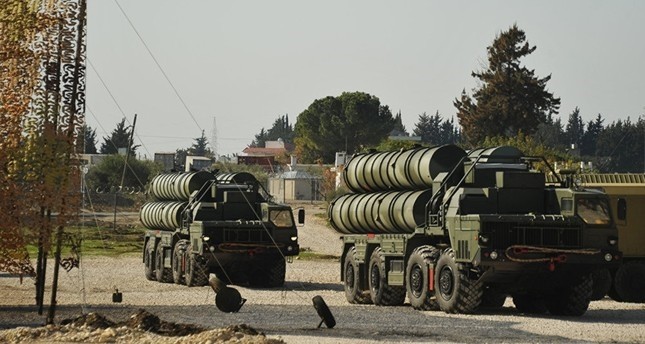 President Erdou011fan said the first down payment for the missile system was already transferred to Russia.
by Daily Sabah Sep 13, 2017 12:00 am

Russia and Turkey have signed a contract on the delivery of the S-400 missile system and it will soon come into effect, said Vladimir Kozhin, Russian President Vladimir Putin's aide for military-technical cooperation.

"As you may know, the S-400 is one of the most complicated systems consisting of a large set of technical components, so there are quite a few nuances. I can merely guarantee that all of the decisions made under this contract strictly agree with our strategic interests," Kojin stated to Russia's TASS agency yesterday.

He added that Russia finds the reaction of some western countries that have been trying to put pressure on Turkey "quite natural" regarding the deal.

President Recep Tayyip Erdoğan said on Aug. 10 on his way to Astana that the first down payment for the missile system was already transferred to Russia and dispelled speculation on whether Turkey would give up ongoing negotiations with Russia for the purchase of the S-400 missile defense system due to pressure from NATO.

"The S-400 missile system deal has already been signed by officials. As far as I know, the first installment was also transferred. This process will continue between Turkey and Russia. Both [Russian] President [Vladimir] Putin and I are determined to realize this deal," Erdoğan said.

The voice of criticism rose from the United States after Erdoğan announced the decision to purchase the S-400 air defense system in late July.

"Generally, we think that it is more suitable for allies to buy equipment that can work together in harmony," said Pentagon spokesman Jeff Davis on July 31. Davis said they were concerned that there would be a mismatch between the NATO air defense system and the Russian S-400 system.

Ankara objected to the criticism by the U.S., underlining that another NATO member state, Greece, formerly purchased the Russian S-300 defense system and has been using it for years.

With the purchase, Turkey aims to guard against threats in the region, while Ankara also demands that the deal include the transfer of technology to enable the country to build its own missile defense system.