Iran deploys troops, tanks on the border, drills with with Iraq after KRG referendum 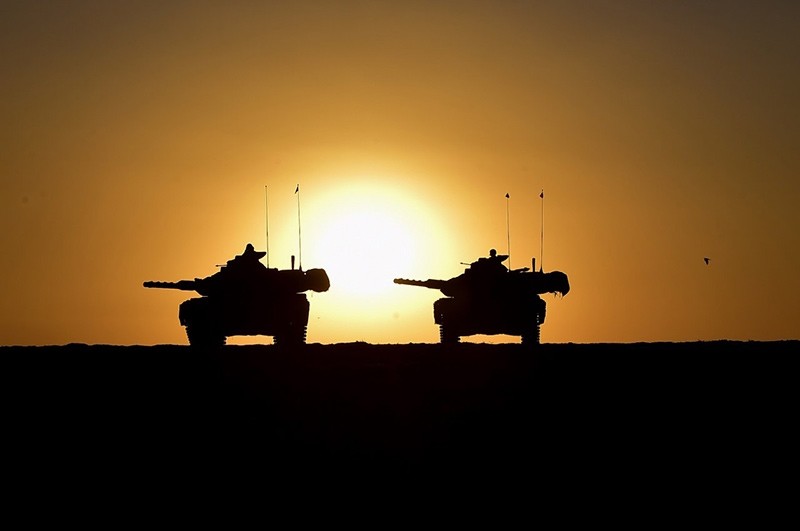 A handout photo made available by the Turkish General Staff press office shows Turkish soldiers with their tanks participate in a military exercise near the Turkish-Iraqi border in the Silopi district, in u015eu0131rnak, Turkey, September 29 2017 (EPA Photo)
by Daily Sabah with Wires Oct 02, 2017 12:00 am

Iran deployed 12 tanks and artilleries to the border with northern Iraq on Monday amid tensions in the wake of the Kurdistan Regional Government (KRG) referendum, according to a KRG administration official.

"Iraqi and Iranian units began exercises at 11:00 a.m. (8:00 GMT) with tanks and infantry only 250 meters (yards) from the border," Shwan Abu Bakr, the Kurdish customs chief at the Bashmakh border post, told AFP.

On Saturday, Iranian state media cited a military spokesperson from Tehran as saying, "Iran and Iraq have agreed on taking the necessary steps to provide border security."

In the meantime, the Iraqi central government has called on the KRG to cancel the results of an illegitimate independence referendum before engaging in dialogue.

"The KRG has to cancel the illegitimate referendum results to empower Iraq's unity for serious dialogue with Baghdad," Iraqi Prime Minister Haider al-Abadi's office said in a statement on Monday.

The statement called on the KRG to "end provocation in the areas it seized and abide by the decisions taken by the federal and constitutional court."

On the KRG's side, the government on Monday welcomed a call by prominent Shia cleric Ayatollah Ali al-Sistani for dialogue between Baghdad and Irbil following the referendum.

"Dialogue is the only way for solving unresolved issues between Irbil and Baghdad," the KRG said in a statement on Monday.

Tension has been high between Baghdad and Irbil since the latter held a controversial referendum last week on secession from Iraq.

The poll has been denounced by Iraq and its neighbors, who view it as illegitimate, and Baghdad has moved to ban international flights into KRG-held areas and the closure of foreign missions in the Kurdish region.

Last week, Sistani said he was saddened by attempts to break up the country of Iraq, warning that moves by the KRG could pave the way for foreign interference in Iraq.

Meanwhile, Pakistan on Monday expressed deep concern over the recently held referendum in Northern Iraq, calling it a controversial move that violates the Iraqi Constitution and lacks legitimacy.

The referendum violates the Iraqi Constitution and, therefore, "lacks any legitimacy," the spokesman said.

"It also presents a challenge for the peace and security of Iraq, and the entire region," he added.