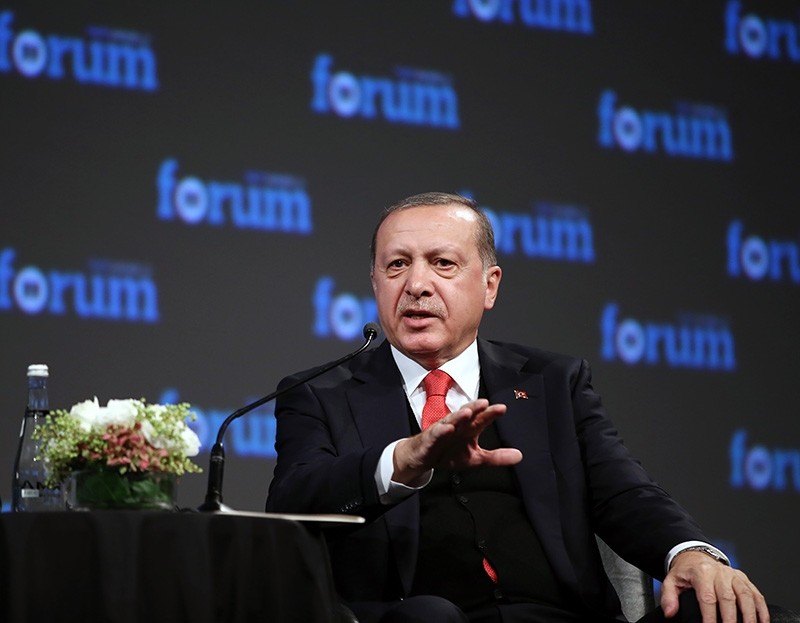 President Recep Tayyip Erdoğan criticized Thursday the West for being hypocritical in the fight against terrorism, saying Turkey's Western allies turn a blind eye to terror activities by the PKK terrorists and Gülenist Terror Group (FETÖ).

Speaking at TRT World Forum in Istanbul, Erdoğan criticized U.S. support to the PKK terrorist organization's Syrian affiliate, the People's Democratic Union (PYD) and its armed wing the People's Protection Units (YPG), saying that the West picking and choosing between terrorist groups is not the way to fight against terrorism.

"Who is siding with the PYD and YPG against the Daesh terror group? America. Is it logical to eliminate a terrorist group via another terrorist group? I have told Mr. Trump this, that is why I am saying it here openly."

"The PYD is in Afrin. Can we remain silent against the PYD? We will continue to fight against terrorism until the end," he added.

The president criticized EU states and the U.S. for turning a blind eye to terrorist activities within their borders, saying, "I will give names since there is no point in talking secretly. Everyone should know the truths. I presented 4,500 files on the PKK and they did not respond to any of them. Despite Turkey having submitted the documents evidential of their terrorist activities, these terrorists keep strolling around Europe, especially in Germany, quite freely. Wasn't the PKK recognized as a terrorist organization by the EU? If it is a terrorist organization, then, I'm giving you the documents prepared by our intelligence organization. Take them and take action accordingly. The same applies to the FETÖ [case]. In Germany, they held a demonstration in under supervision of the police and announced my death warrant. When I question Merkel about this, she looks at the people around her. PKK and FETÖ terrorists were holding demonstrations when I was going to the Turkish ambassador's residence in the U.S. The two detained PKK terrorists there were later released. Yet, the two patriots who were also detained there are still under detention. If my party, which won the election with a great majority, is judged by the West, then I doubt that West."

Founded in 1978, the PKK, which is also designated a terrorist group by the U.S., the E.U. and NATO, resumed its decades-long armed campaign against the Turkish state in July 2015. A Europol report issued in June cited Belgium, France, German, Italy, Romania and Switzerland as countries where the PKK could freely carry out propagandist activities and fundraisers. The report also noted the PKK's attacks against the institutions, community centers and properties of millions of Turks living in Europe.

Turkish intelligence sources said earlier in December that the PKK terror organization gains 30 million euros ($35 million) of income per year by collecting fees from its foundations in European countries despite the group being listed as a terrorist organization by the EU. The terrorist group is also involved in drug, arms and human trafficking, abductions, extortion, murder and forced or voluntary recruitment throughout Europe.

The states that claim to be democratic, did not support us when a coup attempt took place in Turkey, Erdoğan said, criticizing Turkey's Western allies for their lack of timely support in the July 15 coup attempt last year, perpetrated by FETÖ, that left 250 people dead and more than 2,200 injured.

"It is only after seeing the coup fail that they started calling us, offering their wishes for a 'speedy recovery.' How can this be?" the president questioned, while criticizing the U.S. government for failing to extradite FETÖ leader Fetullah Gülen, who has been living in the U.S. since 1999.

Erdoğan also said there is ongoing injustice around the world, where the economically strong is portrayed as the ones who are just and rightful.

"Unfortunately there is no justice in the world. We live in a time that the strong - particularly financially - are presented as the ones being in the right; a world where the strong are right, not where the right are strong. It is not possible to accept such a world."