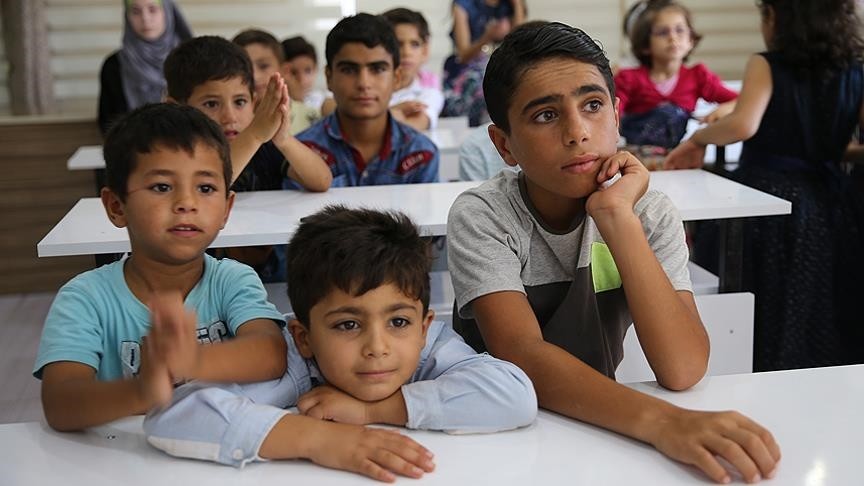 Syrian children closely follow the developments regarding the Idlib transition of the Turkish military in Syria since they want to return to their homes as soon as possible.
by Daily Sabah with AA Oct 24, 2017 12:00 am

The Turkish Armed Forces' (TSK) Idlib operation has introduced hope for Syrian orphans and other survivors who escaped to Hatay in southern Turkey to flee the ongoing war.

Young refugees of the Syrian war who live in the Children's Life Center in Reyhanlı, a town in Hatay, pray for peace and hope to go back to their hometown as soon as possible.

Rabia Hammudi, 14, who lives with her mother and two siblings at the center, said they escaped to Turkey after their father lost his life two years ago in a bomb attack in Idlib.

"We are grateful to the Turkish soldiers for what they have done in Syria, so far. I hope the attacks come to an end so I can reach my village and my relatives. We came here, but our father's grave, our relatives and friends are in Syria," Hammudi said

She added that they were counting down the days until they can be reunited with their family and friends once again.

Eye Yunis, 12, took refuge in Turkey with his mother and sibling following the bombing of his village located near Idlib. He lost father as well as two relatives in the attack.

"We are thankful to [President] Recep Tayyip Erdoğan for what he has done for us. We are praying that Turkish soldiers can provide peace in Syria because we miss our home country so much," Yunis said.

One of the people in charge of the center, Ali Isbeh, is also from Idlib and has been living in Turkey for three years. He indicated that the families at the center follow the developments in Idlib, including the transition of the Turkish military to the city, quite closely.

"Syrians are aware that the Turkish soldiers are there to put an end to the war and to bring peace to us," Isbeh said.

He also said that the Syrian families in Turkey contact their relatives in Syria to receive information on new developments.

"Their only dream is the finishing of the attacks and returning to their homes, which we hope occurs soon," he said.

The TSK issued a written statement on Oct. 9 declaring that Turkish forces had crossed into Idlib, Syria on Oct. 8 to reconnoiter as part of the efforts to bring peace to the area.

Control of the Idlib region is divided between moderate opposition groups and the al-Qaida-linked coalition of Hayat Tahrir al-Sham (HTS), which was excluded from the Astana talks and rejected the Astana process. The operation aims to clear the HTS from the region to maintain the cease-fire agreement.

As part of the deal set during the last negotiation talks in Astana, Turkey, Iran and Russia will reportedly each send 500 observers to Idlib to monitor de-escalation zones.

President Erdoğan had previously said Turkey will be inside the city of Idlib, while the Russian forces will ensure the security of the outside zones.

The Astana agreement with Bashar Assad's foreign allies Russia and Iran involves reducing warfare in several regions of Syria, including Idlib and adjacent swathes of the northwest, the most populated opposition-held areas.

Idlib, located in northwestern Syria on the Turkish border, faced intense attacks by the Syrian regime after a vicious civil war broke out in 2011.

After March 2015, Idlib was no longer under the control of the Syrian regime and was dominated by military opposition groups and anti-regime armed organizations.

With a previous population of around 2.5 million, the city is now crammed with about 4 million people following the arrival of civilians who fled violence in central Syria.

Following the Idlib operation, Turkey aims to contain the Afrin region, which is controlled by the Democratic Union Party (PYD), the PKK's affiliate in Syria, and its People's Protection Units (YPG) militia.