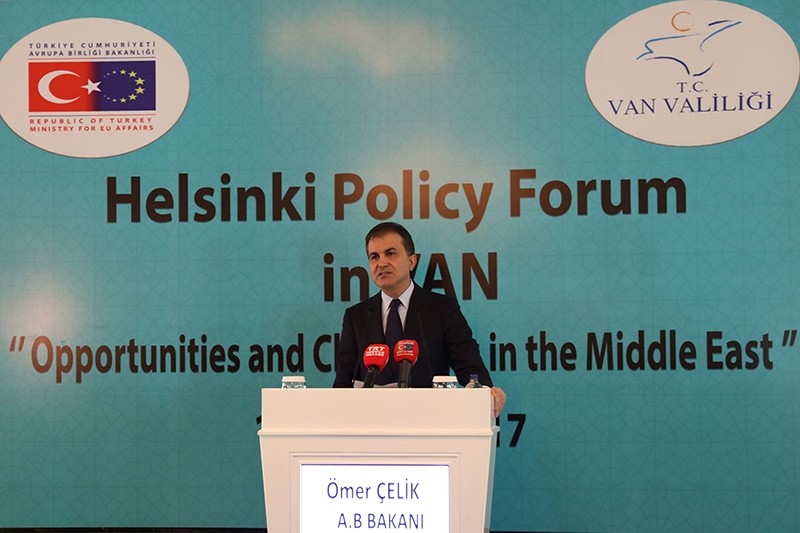 Turkey's Minister for EU Affairs Ömer Çelik said Saturday that while Turkey continues going to great lengths to re-establish peace and stability in the region, it is not possible to accomplish alone.

Speaking on the first day of the two-day Helsinki Policy Forum in eastern Van province that focuses on the Middle East and Asia, Çelik said during a session, Opportunities and Challenges in Our Region: The Need for Sustainable Framework based on Regional Ownership, "This region, which was once known for the Israel-Palestine issue that we refer to as the Middle East Peace Process, is now known for the Arab Spring and, especially, for the [ongoing] incidents in Iraq and Syria."

Referring to the refugee crisis, the minister said that Turkey had reduced pressure on Europe by hosting more than 3 million Syrian refugees and 400,000 Iraqis. "If your neighboring country is poor and not secure, such conditions will have a negative effect on peace and security at home, as well," he said.

He added that international cooperation is necessary to be successful in the fight against terrorism. "Arming the [People's Protection Units] YPG terrorists under the guise of fighting Daesh clearly shows how the international community is confused and disoriented [regarding the issue]," Çelik said, referring to U.S. support for the Syrian Democratic Forces (SDF) in Syria, which is predominantly led by PKK terrorist organization's Syrian offshoot the Democratic Union Party (PYD) and its armed wing, the People's Protection Units (YPG), under the pretext of fighting Daesh.

The PKK is listed as a terror organization by the U.S., the EU and Turkey. While Ankara also recognizes the PYD/YPG as a terrorist group, Washington considers the PYD/YPG as the "most effective partners" in the counterterrorism fight against Daesh. However, Turkey has long argued that there are organic organizational links between the PKK and the PYD/YPG, saying that one terrorist group cannot be eliminated by another. Instead, the Turkish government argues that local forces and legitimate armies should be utilized in the fight against Daesh, while keeping in mind the sensitive demographic issues on the ground.

The Helsinki Policy Forum is a process of dialogue founded in 2014 to facilitate dialogue and understanding, focused on addressing the most pressing challenges in the Middle East and North Africa (MENA) region, according to the Finnish Foreign Ministry, which funds the forum. The forum has previously been held in Helsinki, London and Moscow and will be held in Beirut next year.