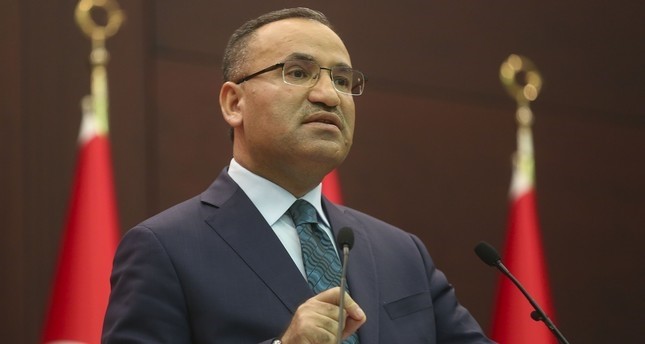 Deputy PM Bozdağ accused CHP head Kılıçdaroğlu of defaming and striving to make President Erdoğan step down with ‘fake documents', asserting that he cooperates with terrorist groups such as the PKK and FETÖ

At a press conference following a meeting of the council of ministers yesterday, the deputy prime minister said Kılıçdaroğlu should resign amid debates. "What we expect from Kılıçdaroğlu is this: Act like an honorable and dignified person. … What he [Kılıçdaroğlu] should do as an honorable person is resign from his post as the CHP chairman," Bozdağ said.

Stressing that the CHP has been striving to make President Erdoğan step down with different tactics, Bozdağ said it has not abstained from collaborating with terrorist groups in this respect. "The CHP is in fact working on the same goal as terrorist organizations to get our president to step down from office. It shows no shame. Its cooperation with FETÖ is very clear. Its cooperation with the PKK is very clear."

The deputy prime minister also said the barons and Gülenists want Kılıçdaroğlu gone now. "Foreign forces have made a decision that Kılıçdaroğlu's time is up. Tomorrow he says he will present another document. I am curious too. We will see together what kind of lies he will bring forward."

During his party's parliamentary meeting last week, the CHP leader revealed alleged documentation of money transactions worth millions of dollars made by President Erdoğan's entourage to a bank account on an island.

"In 2011, a company was founded on the Isle of Man. It's a small one. We have ownership documents for it. A person named Sıdkı Ayan is the only person on its executive board, who then handed the company over to Kasım Öztaş," Kılıçdaroğlu said.

President Erdoğan quickly rejected the claims, saying that he has not transferred any money abroad and the CHP leader cannot prove that he has had money in bank accounts abroad. The president said he would resign should Kılıçdaroğlu prove it. Furthermore, Erdoğan dared Kılıçdaroğlu to step down if he is not able to prove the claims.

Erdoğan's lawyer previously rejected all the claims made by Kılıçdaroğlu and asserted that the documents presented by the CHP leader were "fabricated," adding: "Kılıçdaroğlu should submit the alleged documents to the public prosecutor's office and file a criminal complaint."AK Party reacted to the incident as well. AK Party spokesman Mahir Ünal said last week, "The CHP chair should immediately hand over the documents to the prosecutor's office and share them with the public and media if there is any element of crime." Saying that this is not the first time Kılıçdaroğlu shared documents in an attempt to denigrate the ruling AK Party, Ünal said: "On Dec. 17 and 25 Kılıçdaroğlu shared illegal wiretaps given by the Gülenist Terror Group [FETÖ]."