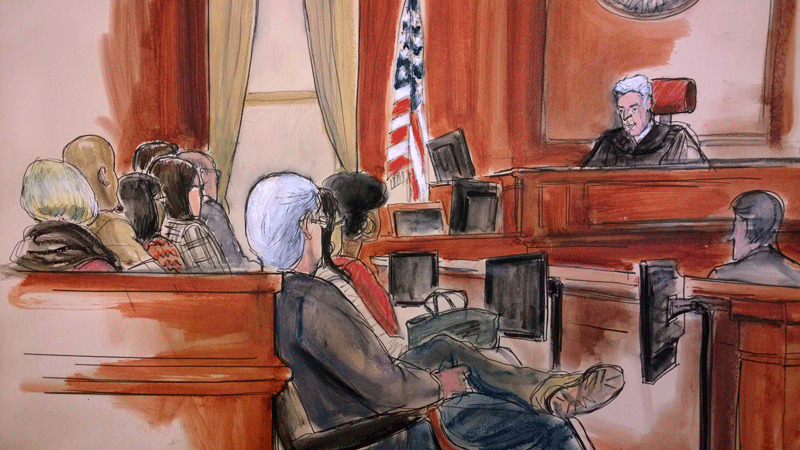 In this courtroom drawing, Judge Richard Berman addresses the jury at the end of the day's deliberations in the corruption trial of Halkbank executive Mehmet Hakan Atilla
by Daily Sabah with AA Jan 03, 2018 12:00 am

A U.S. judge refused to rule a mistrial on Tuesday in the case of Mehmet Hakan Atilla, an executive at Turkey's majority state-owned Halkbank, who is charged with helping Iran evade U.S. sanctions.

In a Manhattan federal court, U.S. District Judge Richard Berman rejected arguments by Atilla's lawyers that the trial was tainted when prosecutors asked Atilla, during a cross-examination on Dec. 19, whether he remembered that a report by a Turkish expert had concluded he violated sanctions.

Defense attorneys made the mistrial request, saying that prosecutors questioned Atilla based on a report prepared by a fugitive member of the Gülenist Terror Group (FETÖ), Osman Zeki Canıtez, in an attempt to strengthen the government's case.

They also said that the report was not among the initial evidence provided and it was therefore misguiding the jury.

Berman said on Tuesday that his instruction to the jury was enough to prevent any unfairness to Atilla, adding that a mistrial was an "extreme" outcome that should be avoided whenever possible. This was the second time that the judge denied to declare a mistrial.

The defense also appealed for a previous mistrial based on the testimony from another FETÖ fugitive, Hüseyin Korkmaz, who they said "submitted stolen evidence" and "testified wrongly."

The former police official admitted in court that he had stolen documents related to an investigation and roundup of scores of FETÖ suspects in Turkey in late 2013.

FETÖ and its U.S.-based leader, Fetullah Gülen, orchestrated the July 15, 2016 coup attempt that was defeated, but left 250 dead and nearly 2,200 injured.

The jury in New York was expected to continue their deliberations yesterday to decide on the fate of Atilla after a second mistrial request in the case was denied.

A panel of six men and six women are included in the jury, who were scheduled to begin their duty after their holiday break to consider six charges against Atilla, the deputy CEO of Turkey's Halkbank – Turkey's largest bank.

Atilla was arrested in the U.S. earlier this year for allegedly violating American sanctions against Iran.

The 12 jurors must decide on each of the six different offenses Atilla is accused of separately and make all decisions unanimously.

If the jurors fail to come to a unanimous decision, the judge may declare a mistrial, after which prosecutors would have to decide whether to retry Atilla.