Justice important for West only when it serves them, Turkey was just even during coup: Erdoğan 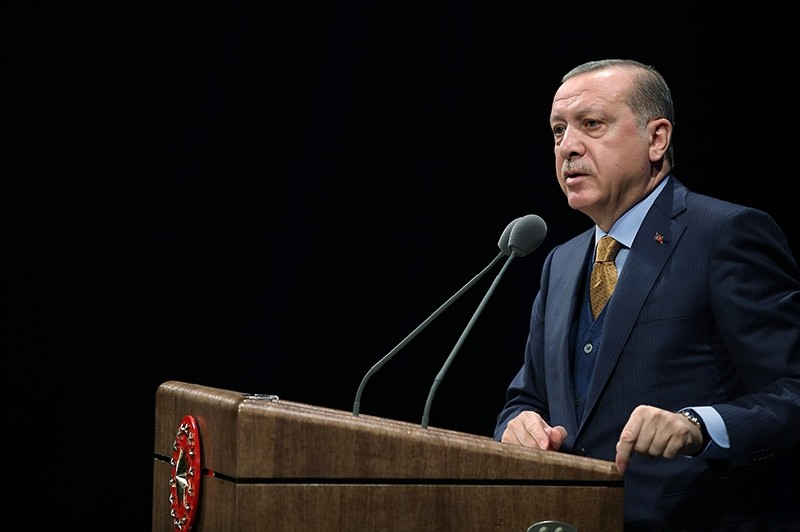 President Recep Tayyip Erdoğan Wednesday accused global powers of hypocrisy in the execution of justice, promotion of democracy and freedoms, saying they only defend these values when it is in their own interests.

"When the U.S. asked Turkey to extradite 12 people in the past 15 years on the grounds that they are terrorists, we showed goodwill and extradited them, but when we ask for Gülen with 4,500 files of evidence, they don't," Erdoğan said during his speech at the Justice Council held in the Beştepe Presidential Complex, referring to Ankara's demand on the extradition of Fetullah Gülen, the leader of the Gülenist Terror Group (FETÖ), who has been living the in the U.S. since 1999 in a self-imposed exile.

Erdoğan responded to criticism directed at Turkey's justice system from abroad in the aftermath of the failed coup, saying those who criticize Turkey fail to cooperate with the country even on apparent terrorism cases.

"Those who attempted the coup in my country are coming to your country, but you try to protect them instead of handing them over to Turkey," the president added.

Gülen is accused of orchestrating the attempted coup on July 15, 2016, which left 250 people dead and nearly 2,200 injured. Ankara officially submitted evidence to the U.S. in October 2016, regarding Gülen's network, which formed a quasi-state within the Turkish government and attempted to topple it with the ultimate intent to take over the state through a coup.

Despite Ankara's determined efforts, the administration of former U.S. President Barack Obama took no action against the U.S.-based terrorist leader. Under normal procedures, Gülen should have already been arrested, since the Turkish authorities issued an official request for his extradition on Sept. 13 under the 1979 treaty between Turkey and the U.S.

"They [U.S.] had no respect for law and legislation," Erdoğan said. "They attempt to challenge Turkey through political decisions. Sorry, but I have no respect for these kinds of decisions."

Turkey has criticized the conviction as lacking any real evidence and a political conspiracy pushed by members and sympathizers of FETÖ.