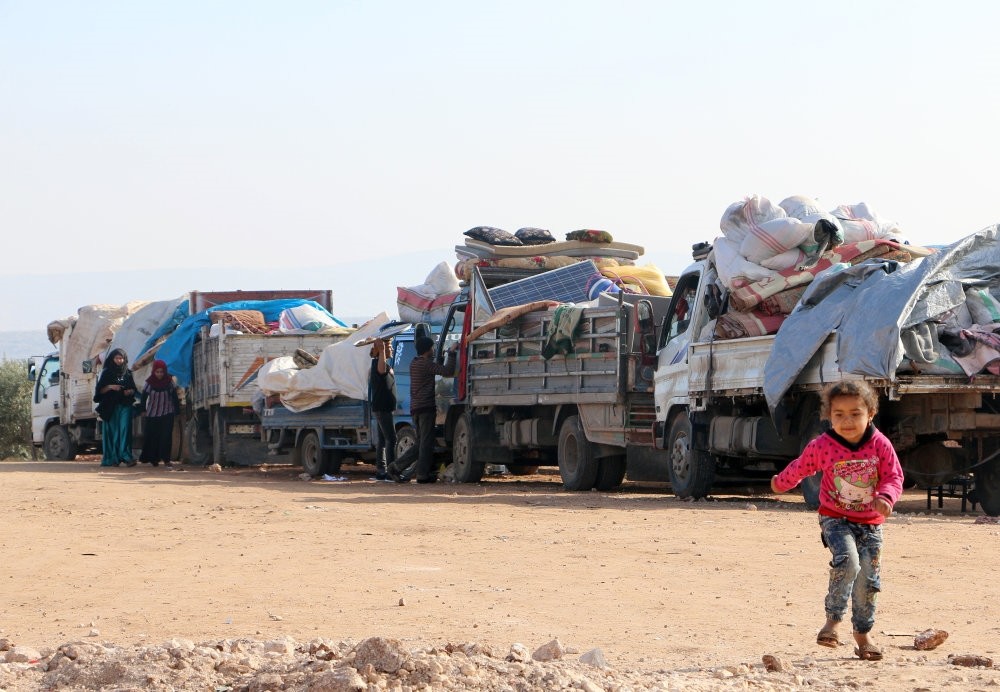 Turkish aid organizations mobilized to answer the urgent humanitarian needs for food, shelter and medicine for those displaced as a result of heavy bombardment by the Assad regime and airstrikes by Russia on Idlib

Turkey has accelerated efforts to address the immediate needs of the recent wave of refugees displaced from opposition-held Idlib province in line with its humanitarian approach to the crisis in Syria. Turkish aid organizations have been saddled with the difficult task of addressing the basic needs of food, shelter and medicine for Syrians as a new wave of migrants is coming toward areas close to Turkish borders. Syrian regime forces recently advanced on the largest moderate opposition-held enclave in the country's north amid a wave of airstrikes.

Following the regime's assaults, tens of thousands of people fled the province. In the face of the growing need for shelter, the Turkish Red Crescent has been setting up tents for Syrians who have been fleeing their homes in search of safer areas. The Red Crescent plans to set up 500 tents as a first step in the region of Kelbit, north of Sarmanda and has already completed setting up 100 tents. The Turkey Diyanet Foundation (TDV) set up 1,000 tents for Syrian refugees in northern Idlib after they fled violence in their hometown Hama. In relation to the incident, TDV Syria coordinator Mahmut Temelli said that over 27,000 families have fled Hama and now live in tent cities in the towns of Babiska, El Hassan and Darkush.

"Shelter is the most significant need for families coming from Hama; they have been spending nights in their cars, streets or fields. Some of the children have lost their lives because of the cold," Temelli underlined.

Pointing to the heavy weather conditions, he said that there has been an increase in diseases; therefore, they have been providing medical aid as well. He added that the Diyanet Foundation also supplied food baskets, winter clothing, heating devices, blankets and other materials to refugees. 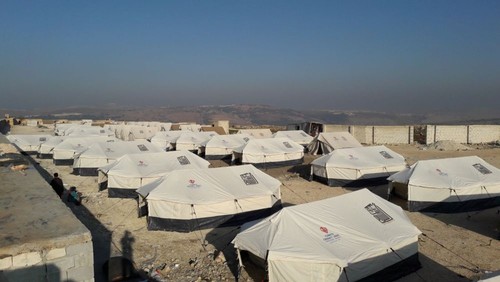 The Turkey Diyanet Foundation (TDV) set up 1,000 tents for Syrian refugees in northern Idlib after they fled violence in Hama.

Nearly 100,000 people have been displaced since early December by the fighting, the United Nations says.

Sharing a 911-kilometer-long border with Syria, Turkey has been greatly affected by the ongoing civil war as various terrorists groups have filled the vacuum left in the region and posed security threats against the country.

"Turkey spent $30 billion to meet the needs of 3.4 million Syrians seeking refuge in their northern neighbor. Free access to medical care, education, as well as the right to join the labor force have been extended to our Syrian guests to help them better integrate into their host society," Foreign Minister Mevlüt Çavuşoğlu wrote in an op-ed in Newsweek magazine.

Aside from its humanitarian efforts to the Syrian crisis, Turkey has been seeking active policies to put an end to the conflicts and find a sustainable resolution.

The foreign minister said, "A political solution can be reached through an inclusive, free, fair and transparent Syrian-led and Syrian-owned process, leading to а constitution that enjoys the support of the Syrian people and free and fair elections with the participation of all eligible Syrians under U.N. supervision."

Çavuşoğlu added that the Geneva process must be resuscitated and that the upcoming Congress of National Dialogue to be held in Sochi could serve as a complementary exercise. All segments of Syrian society except for terrorist groups are expected to attend the Syrian National Dialogue Congress with the participation of about 1,700 people.

Ankara has been sternly warning its allies that terrorist groups should not play the slightest role in the future of war-torn Syria. The minister also noted that they plan to hold a meeting on Syria with like-minded countries in Turkey.

As part of the de-escalation zones, agreed in a tripartite consensus between Turkey, Russia and Iran, Turkish forces are also currently in Syria's Idlib province, which also borders the People's Protection Units (YPG)-held Afrin region, monitoring the process in military posts.

Upon the recent incidents, Ankara called on Iran and Russia to fulfill their duties as guarantor states in Syria and stop the Assad regime's increased violations in Idlib. Çavuşoğlu pointed out that Russia and Iran have no excuses for attacks by the regime, noting that the duty falls upon the guarantor states to maintain the de-escalation zones, which were established during the Astana, Kazakhstan peace talks.

Turkey has summoned the ambassadors of Russia and Iran to convey its concerns regarding the Assad regime's violations of the de-escalation zone borders in Idlib.

Commenting on the recent incidents and political efforts, Kremlin spokesman Dmitry Peskov said, "Negotiations are required to find a political resolution to the Syrian crisis. These negotiations will continue between Turkey, Russia and Iran."

The Associated Press (AP) reported that Syrian state media said the attack was repelled. According to AP, by Thursday morning, it had slowed the regime offensive toward the Abu Zuhour air base that has been held by the opposition since 2015.

Recapturing the air base has been a key regime goal since late October, and Syrian forces have captured some 160 villages since first they launched the offensive. The operations also aim to secure the road linking the capital, Damascus, with the northern city of Aleppo, Syria's largest.

Earlier this week, the Russian Defense Ministry claimed that a series of attacks had targeted its Hemeimeem air base and a naval facility in Tartus in Syria and that 13 drones had been averted.

According to a statement issued in the ministry's official newspaper, the Russian Defense Ministry also sent a letter regarding the incident to the head of Turkey's National Intelligence Organization (MİT), Hakan Fidan, and Chief of General Staff Gen. Hulusi Akar.

Idlib province, the largest remaining opposition-held territory in Syria, is packed with civilians, many of whom fled there from fighting in other areas across Syria.

According to a statement yesterday by the International Rescue Committee, quoted by AP, it received hundreds of newly displaced people from the southeast of the province in the past few days, joining thousands who fled over the past month.

Many of the newly displaced brought only the belongings they could carry, the committee said, adding that one mother of two twin babies recounted the initial panic of fleeing the airstrikes. The woman was so frightened she initially left one of her children behind.

"We couldn't think properly. The fear affected our brains," the IRC quoted her as saying. The baby was unharmed, she added.