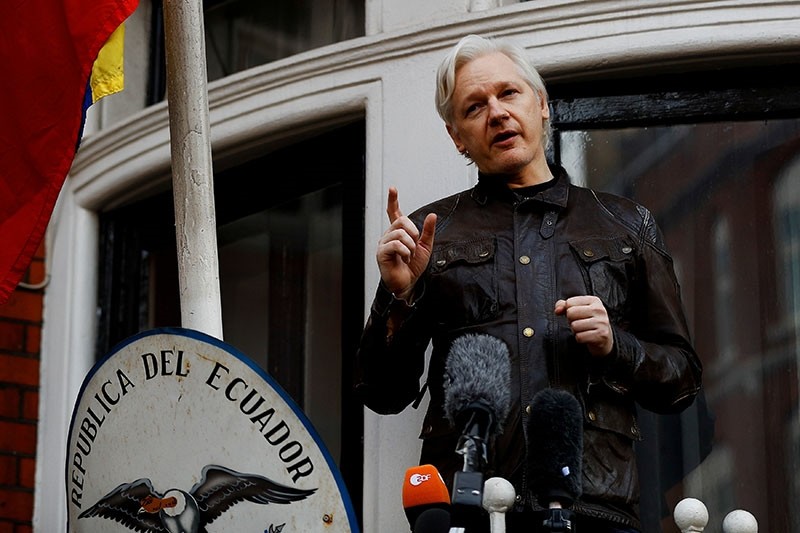 This file photo shows WikiLeaks founder Julian Assange on the balcony of the Ecuadorian Embassy in London, Britain, May 19, 2017. (Reuters Photo)
by Anadolu Agency Jan 18, 2018 12:00 am

"The most serious case of recent fake news is not on Trump's #FakeNewsAwards list. NBC substantially assisted the military coup in Turkey which killed hundreds," Assange wrote on his official Twitter account.

Kyle Griffin, an NBC News producer, had tweeted a fabricated claim that Turkish President Recep Tayyip Erdoğan fled the country to request asylum in Germany, during the failed coup.

The Turkish embassy in the U.S. had demanded an apology from the major U.S. news network for an "utterly unacceptable" and "false" report regarding the coup attempt.

The embassy had described the false news "outrageous" and said that such sensitive information about the well-being of the Turkish president was unprofessionally handled, and shared publicly without first checking first the validity and credibility of the source.

"Senior US military source tells NBC News that Erdoğan, refused landing rights in Istanbul, is reported to be seeking asylum in Germany," Griffin had said on Twitter.

Griffin's tweet was also described as "highly irresponsible" by the Turkish embassy.

A number of media outlets, including The Washington Post, used Griffin's tweet in their reports as millions of residents heeded Erdogan's call to defeat the coup attempt by taking to the streets.

Assange has been holed up in the Ecuadorian Embassy located in Knightsbridge, central London for nearly six years after claiming diplomatic asylum in June 2012 after being wanted by Swedish prosecutors for questioning over various alleged sexual offenses. He was supposed to be extradited to Stockholm by British authorities before entering the embassy.

He refused to go back to Sweden, referring to the risk of extradition to the U.S., where he insisted the American authorities would charge him with espionage for releasing troves of once-secret files to the public.

Assange, who is Australian by birth, recently became an Ecuadorian citizen and was granted a passport.

Swedish prosecutors last year dropped their investigation into allegations against Assange but he still faces arrest by British authorities for breaching his former bail conditions if he leaves the embassy.