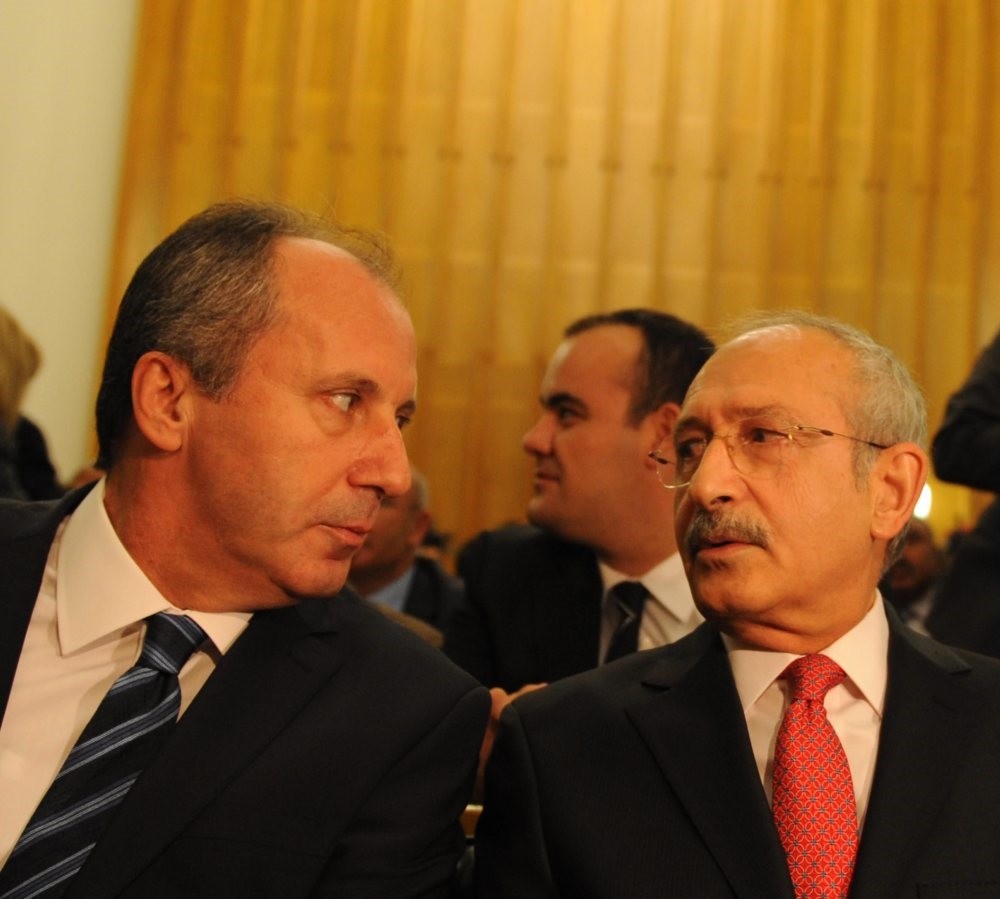 Muharrem u0130nce (L), a CHP deputy and candidate for the CHP leadership, said that he discussed the rivalries in the party with Chairman Kemal Ku0131lu0131u00e7darou011flu (R), and their negative implications on how the public sees it.
by Daily Sabah Feb 02, 2018 12:00 am

As the main opposition CHP's congress to elect its chairman approaches, opposition figures in the party have called on Chairman Kılıçdaroğlu to reduce pressure on delegates to provide a free environment for the election

The main opposition Republican People's Party (CHP) has been discussing the recent pressure mounted on delegates ahead of the party's general congress as party members call for a free environment for the election of party chairman.

CHP Chairman Kemal Kılıçdaroğlu has been accused of pressuring delegates ahead of the general congress. Muharrem İnce, who announced his candidacy for the CHP chairmanship, said that he conveyed the need to reduce pressure on delegates in a meeting with Kılıçdaroğlu. İnce also said that he has collected the required number of signatures to become a candidate.

During his meeting with Kılıçdaroğlu on Jan. 31 in Ankara, İnce said that he discussed the rivalries in the party and their negative implications on how the public sees it. "I underlined that the vice chairmen collecting signatures from delegates is wrong and it would raise disputes in the public," he said. He also called for reducing pressure on delegates and providing a democratic and free environment for the election of the chairman.

The CHP is set to hold its general congress on Feb. 3-4 and elect its party chairman on Saturday.

İnce, former Istanbul Bar Association head Ümit Kocasakal and Ömer Faruk Eminağaoğlu, a previous head of the Judges and Prosecutors Association (YARSAV), have announced their candidacies for party chairmanship. İnce told the media that he would strengthen the party if elected. "We will change ourselves. We will work to strengthen ourselves rather than talk about the other side. We will establish an effective network of organizations, including those who will vote for us. We will equip ourselves with knowledge from head to toe in the face of attacks from the other side," he said.

Kılıçdaroğlu has come under fire from within the party as he has lost the national vote eight times in elections and referendums since taking office in 2010 after previous Chairman Deniz Baykal resigned amid a sex tape scandal. Unrest in the CHP has also risen since last May when Mersin Deputy Fikri Sağlar was referred to the disciplinary committee due to his criticism of Kılıçdaroğlu. Also, the party's deputy head, Selin Sayek Böke, resigned, igniting heated debates questioning democracy in the party.

CHP Deputy Gürsel Erol also criticized his party on grounds that it "does not step outside the party building." He added that deputies have not shown interest in regions outside of their electoral districts and the status quo in the party causes loss of dynamism in the party.