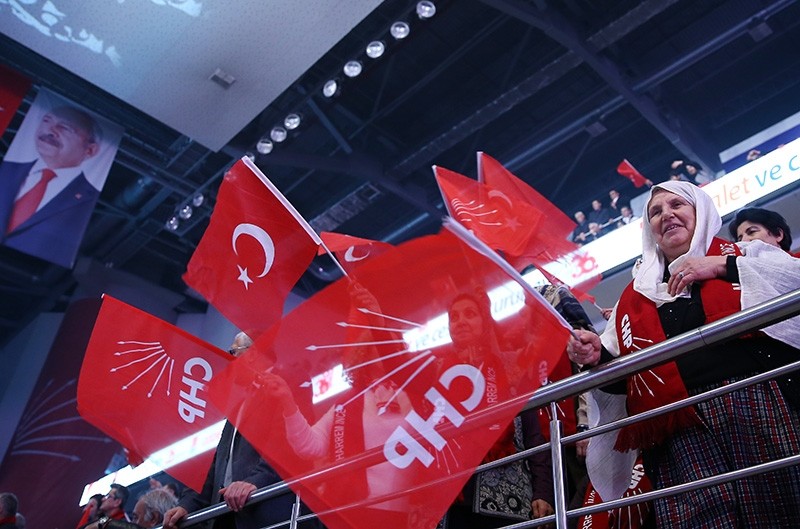 Kemal Kılıçdaroğlu was re-elected Saturday as the chairman of main opposition Republican People's Party (CHP) at the party's 36th general congress this weekend ahead of three crucial elections in 2019.

Kılıçdaroğlu, who has led the party since 2010, was the front-runner for party chairmanship in the congress.

A total of 790 delegates voted for Kılıçdaroğlu, while the other candidate, Yalova deputy Muharrem Ince, received 447 votes. Some 1253 delegates out of 1266 cast their votes.

Ince also ran for chairmanship against Kılıçdaroğlu in the party's 2014 congress, in which 740 delegates voted for Kılıçdaroğlu and 415 for Ince.

Ince was expected to comfortably reach the required number of signatures, and was nominated by 165 delegates on Saturday.

However, an argument broke out later in the congress as 49 delegates backed both Kılıçdaroğlu and Ince, putting Ince's nomination at risk. CHP officials stated that Kılıçdaroğlu wanted the 49 signatures counted for Ince, while Ince, who criticized the nomination process prior to the congress and during his speech at the congress, responded by saying that the CHP administration is trying to undermine his support by the argument.

Former Istanbul Bar Association head Ümit Kocasakal and Ömer Faruk Eminağaoğlu, former head of the Judges and Prosecutors Association (YARSAV), have also announced their candidacies for the party chairmanship, but they could not collect the required number of signatures.

Kılıçdaroğlu has come under fire from within the party as he has lost the national vote eight times in elections and referendums since taking office in 2010, after the resignation of former Chairman Deniz Baykal amid a sex tape scandal. Unrest in the CHP has also risen since last May when Mersin Deputy Fikri Sağlar was referred to the disciplinary committee due to his criticism of Kılıçdaroğlu. The party's deputy head, Selin Sayek Böke, also resigned, igniting heated debates questioning democracy in the party.

The CHP received 25.31 percent of the votes and 133 seats in Parliament in the Nov. 1, 2015, general elections. Many CHP deputies previously criticized the party's vote distribution, claiming that 25 percent of votes is not a success.

However, the constitutional reform and presidential system referendum on April 16, 2017, with CHP being the leading force in the "No" campaign, ended in a close race with 51.4 percent of the electorate backing the changes and "No" votes leading in all major cities. The party aims to capitalize on this result and expand this voter base in the 2019 elections.