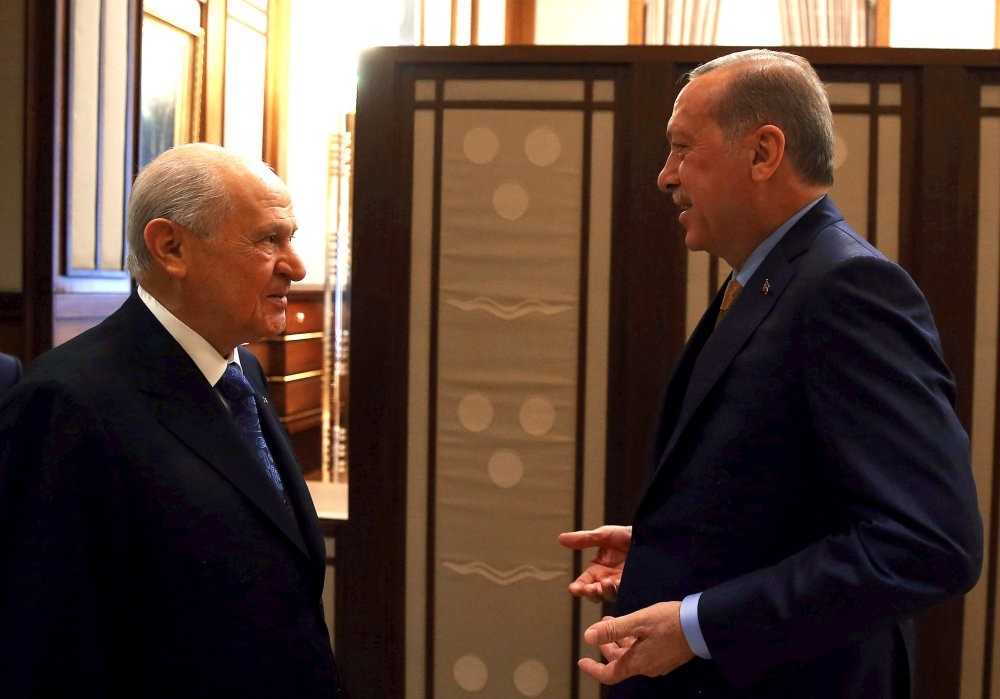 In the beginning of January, MHP leader Devlet Bahu00e7eli and President Recep Tayyip Erdou011fan announced that they are joining forces for the 2019 elections and formed an alliance called the ,National Agreement.,
by Daily Sabah Feb 03, 2018 12:00 am

The unprecedented alliance between the Justice and Development Party (AK Party) and the Nationalist Movement Party (MHP) may reportedly expand with other parties joining what has been termed as the "national agreement," as the two parties seek to increase their chances in the local and general elections as well as the presidential elections in 2019.

As President and AK Party Chairman Recep Tayyip Erdoğan gathered 54 deputies at AK Party headquarters in Ankara on Thursday, he said the alliance with the MHP is not only because they want to reach 50 percent of the vote plus one. He reportedly said there are ongoing talks with other parties, as well.

"There might be others who see themselves in this agreement, not only the MHP. There are meetings with other parties as well. Therefore this agreement should be seen in a broader way," Erdoğan was quoted as saying in the meeting with fellow deputies, which was closed to the press.

The parties that the AK Party is currently meeting are reportedly the Great Union Party (BBP) and the Felicity Party (SP).

As for the controversial issue of whether or not to lower the national election threshold, Erdoğan told fellow deputies that the 10 percent threshold would be kept the same. There have been rumors that a new election threshold would be implemented for alliances, which is speculated to be around 12 or 15 percent. However, the president did not confirm it in the meeting, per the media.

Under the new system, the votes of alliances will be counted together, and a party that stays below the 10 percent election threshold will not be left out of Parliament. Therefore, the AK Party administration is not planning to make a move to lower the threshold. MHP Chairman Devlet Bahçeli was the first to bring the issue to the agenda. Sources close to the parties have said as of now, all options are being considered with regard to the threshold.

The joint committee has so far gathered three times to discuss all options regarding the alliance and adjustment law packages. The two parties are reportedly having differences of opinion on the issue of how parliamentary seats will be distributed among candidates. According to sources close to the AK Party, the parties may come up with a mutual strategy or the Supreme Election Board (YSK) can apply the current D'Hondt system.

One of the alternatives in regard to how seats will be distributed is that each party will have deputies in provinces according to their vote share.