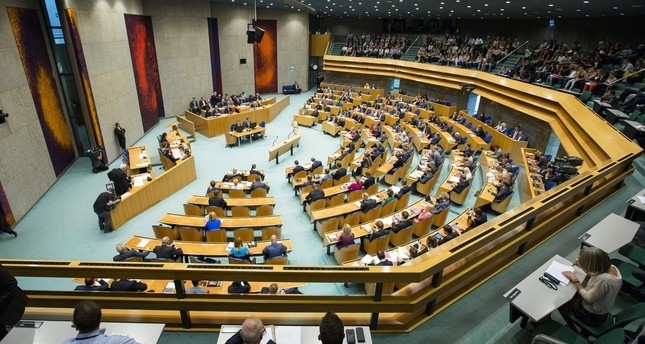 The Dutch government only recognizes events as genocide if that description is supported by a binding U.N. Security Council resolution or a verdict from an international court, acting foreign minister told the Dutch Parliament Thursday.

Answering deputies' questions before a vote in the Parliament over recognizing the 1915 events as "Armenian genocide," Sigrid Kaag said the Dutch government needs the U.N. decision or an international court's decision like the Hague's ruling on the Srebrenica genocide in order for Parliament to follow suit.

However, Parliament members went ahead with the vote regarding the issue and overwhelmingly voted in favor of the proposal prepared by the Christian Union (CU).

"Rulings of international courts, the scientific research by the U.N. and clear and open results in their findings are important in terms of recognition of genocides," Kaag said.

She reiterated that the government acts in compliance with the U.N. Convention on the Prevention and Punishment of the Crime of Genocide and that the Cabinet will "continue to exercise restraint" in the issue.

Later on the same day, Turkey condemned the move by the Dutch parliament. "Turkey strongly condemns Dutch parliament's recognition of 1915 Armenian events as 'genocide', the decision is not legally binding," Ministry of Foreign Affairs said in a statement.

Turkey denies the alleged Armenian "genocide" but acknowledges that there were casualties on both sides during the events taking place in World War I.

From Turkey's viewpoint, the deaths of Armenians in eastern Anatolia in 1915 occurred after some sided with invading Russians and revolted against Ottoman forces. A subsequent relocation of Armenians resulted in numerous casualties.

In another development last week, the Dutch Foreign Ministry formally withdrew its ambassador to Turkey, who has been physically barred from the country for almost a year, over a dispute that began in March 2017. The ministry also said that it will not accept the appointment of a new Turkish ambassador to the Netherlands.

It declined a landing permit to a plane carrying Foreign Minister Mevlüt Çavuşoğlu, who was scheduled to speak at a meeting in Rotterdam. The authorities also barred Family Minister Fatma Betül Sayan Kaya from entering the Turkish Consulate in Rotterdam. She was forced to remain inside her vehicle for hours before being deported to Germany.

The incidents drew severe criticism from Ankara and the foreign ministry asked the off-duty Dutch ambassador in Ankara, who was on leave, not to return "for a while."