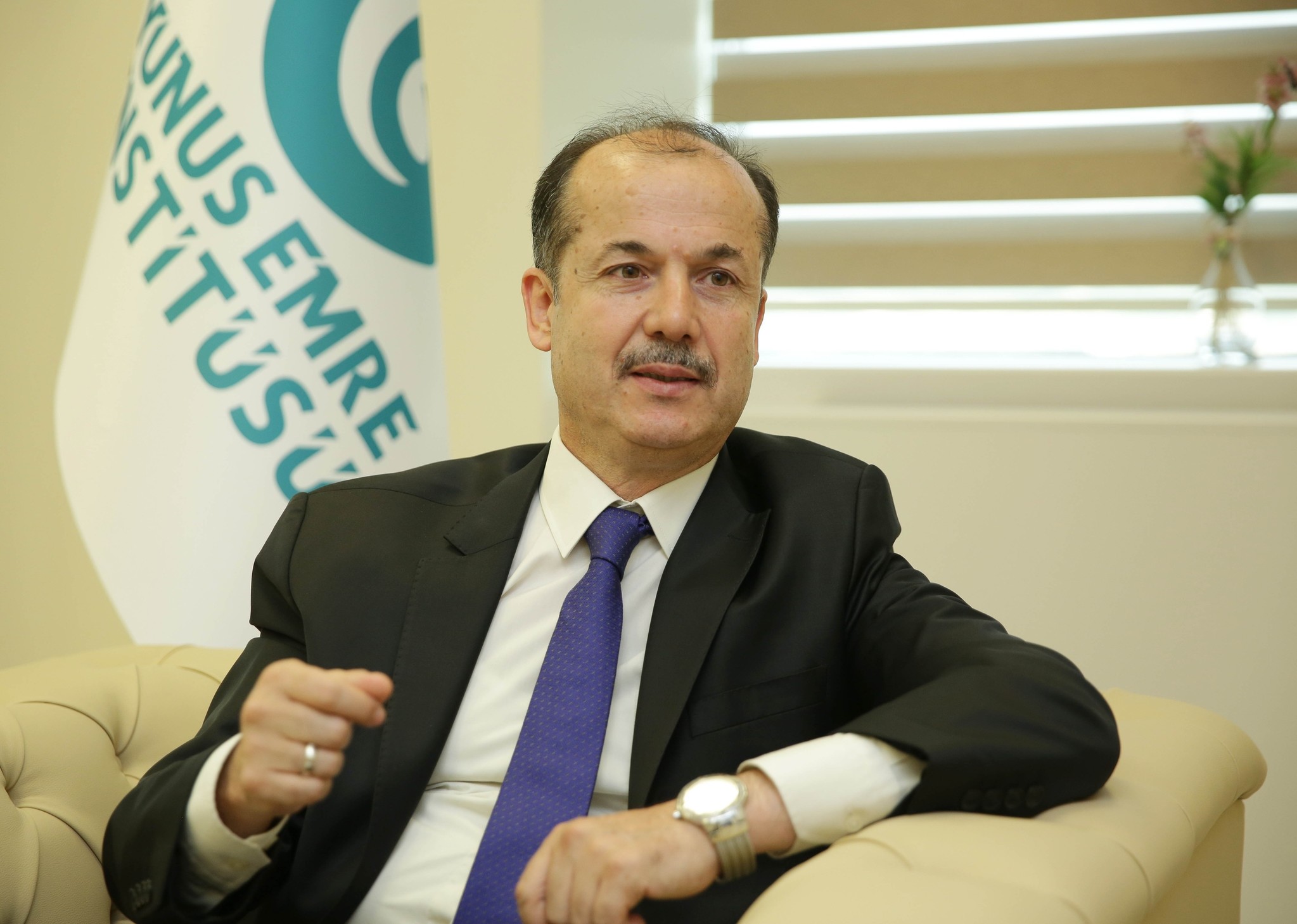 u015eeref Ateu015f said there is a high demand in learning Turkish abroad mostly due to an increased interest in Turkish TV series, particularly in the Balkans and the Gulf region.
by Ali Ünal Mar 05, 2018 12:00 am

Turkey's flagship culture and language body abroad, the Yunus Emre Institute has seen a lot of interest in 54 countries where it has offices, as Turkey's visibility and soft power continues to grow in the international arena

Yunus Emre Institute (YEE) head Professor Şeref Ateş said there is a high interest in YEE along with Turkey's increasing power, influence and visibility in the international community and he added that the increasing interest in Turkey and Turkish brings great responsibilities.

YEE, which is a flagship organization to promote Turkish culture and language abroad, currently has 54 offices in 42 countries. YEE continues to teach Turkish through 140 points of contact around the world. Professor Ateş said currently more than 10,000 people are learning Turkish at their branches abroad while reminding that they would not be able to satisfy the increasing demand even if they increase their current capacity tenfold. Thus, they have created the Turkish Language Training Portal (https://turkce.yee.org.tr/) to satisfy these demands and allow easy access for those who want to learn Turkish. Professor Ateş also mentioned that in the beginning, they planned to reach 20,000 people through this portal; however, in the first six months they have already reached 100,000 people. Therefore, they have updated their goal to reach 500,000 new Turkish learners through their portal at the end of the 2018. 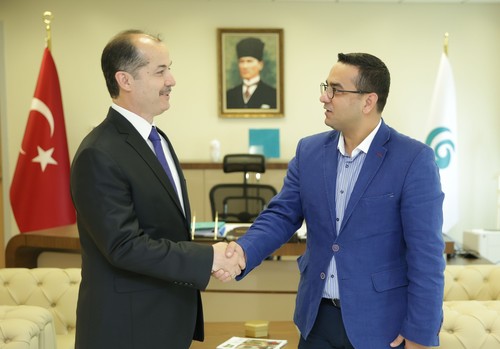 Reminding readers that their essential mission as the YEE is to increase the number of people connected to Turkey and relay correct information about Turkey to the people of other countries, professor Ateş stressed that negative propaganda and news about Turkey have had a limited effect, as their tête-à-tête relations with people abroad changes their perception toward Turkey in a good way.

Daily Sabah: As the Yunus Emre Institute, you have opened a web portal that teaches the Turkish language. How was this idea conceived?

Şeref Ateş: The Yunus Emre Institute (YEE) is a fairly new institution that seeks to increase the number of people who are knowledgeable about Turkey, the Turkish culture and the Turkish language. We have five fields of activity. The first one is teaching the Turkish language, second is organizing cultural events, third is science diplomacy, fourth is organizing events that aim to increase Turkey's soft power together with other international institutions and fifth is improving the YEE's institutional capacity.

Meanwhile, because of the hectic pace of modern life, people are having a hard time attending courses. In this respect, we have created the Turkish Language Training Portal to satisfy the demands and to allow easy access for those who want to learn.

When we proposed this project to the Ministry of Development, our initial target was to teach Turkish to 20,000 people through the portal. Its preparation took almost a year and the portal was brought online six months ago. Even though we have not advertised it, around 100,000 people accessed our portal within a year. We have improved the infrastructure of the portal to accommodate the high demand.

On the portal, we are providing Turkish lessons through various games, educational videos and live online classes. Through an interface that is available in four languages, we are providing Turkish lessons from the A1 to the C2 level. This is a service available free of charge to those who want to learn Turkish. This year we have higher expectations; we believe around 500,000 will access our portal until the end of this year.

DS: Could you inform us about the institute? How many offices do you have abroad and how many people were trained in Turkish at these offices?

ŞA: We currently have 54 offices. Moreover, we also have offices or lecturers in certain universities abroad. Recently, I was a part of President Recep Tayyip Erdoğan's Africa trip, during which we visited four countries. In Algeria, one of the countries we visited, we are training Turkology students in Turkish. Similarly in Senegal, we are providing Turkish lessons at the military academy. We continue to teach Turkish through 140 points of contact around the world.

The reason for learning Turkish differs; for instance, while some in the Balkans and the Gulf learn Turkish to watch Turkish TV series, there are people in the Middle East and Africa who learn Turkish to visit and work in our country.

Additionally, in various other countries including Iran, Egypt and Georgia people learn Turkish for academic purposes. We have provided Turkish lessons to more than 150,000 people up until now.

DS: The YEE was founded around 10 years ago, yet you were able to establish offices in many countries. What is your take on the interest toward the institute?

When we look at the similar culture centers of Western countries, we see that they have been active for at least 50 years. Naturally, they are working to introduce their languages and cultures to a larger audience. We see that these kinds of institutions have reached a certain number and are gradually closing because of decreasing interest.

Meanwhile, the YEE has been growing since the day it was founded. For instance, we will open a new center in Moscow next week. In addition to the growth, we are trying to improve our institutional capacity. We are pleased with the high interest in the YEE along with Turkey's increasing power, influence and visibility in the international community. The increasing interest in Turkey and Turkish brings great responsibilities. We are doing our best to address this interest.

DS: As you have said, teaching Turkish abroad is only one of the many duties of the YEE. Cultural diplomacy is another duty of the institute. Could you inform us about your plans for this field?

Throughout 2017, we have realized more than 1,200 events at YEE offices and various other locations. We are organizing a wide range of events including dance performances, music concerts, stage performances, scientific conferences and art workshops to introduce people to the Turkish culture. We are especially trying to reach the youth abroad and render our culture more visible and widespread.

For instance, we launched the "Sultan Composers" project in 2017. Many of the Ottoman sultans were also competent musicians who had their own compositions. We organized concerts in various countries at which these compositions were performed on stage. We realized these concerts by collaborating with local artists. We worked with Brazilian artists in Brazil and Israeli artists in Israel. In the following days, we will organize this concert in Turkey and we will come together with artists in Istanbul. We will have a concert at the Hagia Irene on March 10 with the participation of artists from 10 countries. These concerts show that Turkey is a country open to all religions and cultures.

DS: You have mentioned science diplomacy while talking about the institute's fields of activity. What do you do in this regard?

As science and culture are extra political fields, it is easier to connect with people from other countries on these subject matters. For instance, we have launched a project called the Mobile Mathematics Museum. We made a trailer that encourages people to think analytically and allows them to learn mathematical theorems through interactions. There are images and simulations that incorporate virtual reality.

We sent this trailer to camps where Syrians live and we have reached 45,000 people so far. Moreover, we have signed cooperation agreements with universities in Ethiopia. We are also working on how to exhibit the Mobile Mathematics Museum in Ethiopia along with projects for the Balkans and Georgia.

Therefore, we are not only focused on promoting Turkish language and culture, but we are also looking to affirm that Turkey is a prominent country in terms of scientific research.

Meanwhile, we also became one of the institutions that provides grants via the EU. Last week, we requested proposals for the Turkey-EU Intercultural Dialogue Grant Program. We will realize a contact meeting for this on March 5. Two million euros will be provided for the Turkey-EU Intercultural Dialogue project. We aim to improve cultural and artistic dialogue along with communication between Turkey and the EU with this fund.

DS: You also have a Turkish Language Summer School program that is for youth around the world. Could you inform us about this program?

Our most essential mission is to increase the number of people who are connected to Turkey and relay correct information about Turkey to the peoples of other countries. We do not make any propaganda; we just invite them to Turkey. In this respect, we have been organizing the Turkish Language Summer School for a couple of years now. We invite youth from all over the world to Turkey. We will be hosting around 1,000 youth in 2018 as part of this program. They will be attending Turkish language courses until 12 p.m. in the afternoon, in which they will have the chance to understand our country and culture better through cultural activities including watching Turkish movies, listening to Turkish songs, seeing Turkish handicrafts and tasting Turkish food.

DS: You have said Turkey's image is good in the eyes of people abroad, however there has been a negative perception toward Turkey in European media for the last couple of years. In your opinion, what causes this disparity between the perceptions of people and the media?

This is the nature of international relations. Turkey has become a more visible country in the international community that advocates a new rhetoric. We are never condescending toward developing countries and are never star-struck with developed countries. Negative propaganda and news about Turkey has a limited effect. Our tête-à-tête relations with people abroad change their perception toward Turkey in a good way.

For instance, last year 10 students from the U.S. came to Turkey while the visa crisis was raging on. Now, they are lobbying in favor of Turkey.

Our main principle is "to love the created for the creator's sake" and for this reason we approach all people with love. We will continue to work on activities and events that will promote our language, culture, art and most importantly our people.