Turkey to build camps in Idlib for 170,000 displaced people 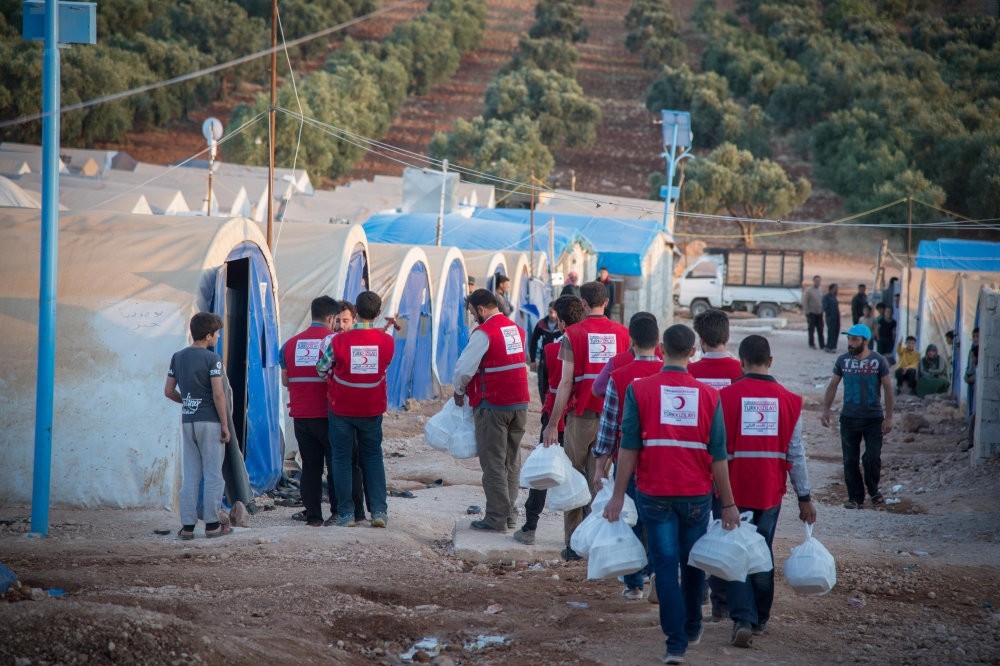 The foreign ministers of Turkey, Iran and Russia will meet in Astana on March 16 to discuss the latest situation in Syria, a spokesman for the Turkish Foreign Ministry said yesterday, while adding that refugee camps, which will be serving 170,000 displaced Syrians, will be built as part of the Turkish humanitarian efforts in the region.

The three countries' presidents are due to meet in Istanbul next month, said Hami Aksoy, spokesman for Turkey's Foreign Ministry.

He added that Turkey will set up camps for 170,000 people in nine locations near Syria's northwestern Idlib province and in the areas cleared and controlled by the Turkish Armed Forces (TSK) and the Free Syrian Army (FSA) in northern Syria, including Azaz, Albil, Tugli, Tal Afar, Naddah, Bardakli and Mashad Rufi after Operation Euphrates Shield.

Last year, Turkey, Iran and Russia agreed in the Kazakh capital Astana to establish de-escalation zones in the northern province of Idlib and parts of the neighboring Latakia, Hama and Aleppo regions. Under the Astana agreement, Turkey is set to gradually establish 12 observation points from Idlib's north to south, which would aim to monitor and sustain the current cease-fire agreement for the de-escalation zones, deliver humanitarian aid to people in need and ensure the secure return of displaced people.

The Turkish Red Crescent and the Disaster and Emergency Management Agency (AFAD) have begun preparations to set up the camps, Aksoy said.

Operation Euphrates Shield was launched on Aug. 24, 2016 to clear the border of the threat of terrorism from Daesh and the People's Protection Units (YPG). Turkey and the FSA managed to liberate more than 2,000 square kilometers of territory with the operation. The TSK and the FSA gained control in the northern Syrian towns of Jarablous, al-Rai, Dabiq and al-Bab during Operation Euphrates Shield, thereby providing security to the Syrian border town of Azaz, which has become a massive center of refugees during the civil war due to its proximity to Turkey and location on the road connecting the main border gate with Aleppo, Syria's largest city before the war.

Aksoy said emergency preparations include the establishment of new camps in case of a large civilian exodus from Afrin.

Turkish state organizations, including the Turkish Red Crescent and AFAD, as well as nongovernmental organizations, such as the Humanitarian Relief Foundation (IHH), lend helping hands to the hundreds of thousands of people in dire need in Syria and for those across the border in Turkey.

The Turkish Red Crescent announced that it spent close to TL 400 million ($106,000) across Syria in 2017 alone. It also established two clothing shops, one in rural Idlib and one in the city's center, which operate in the same way.

The IHH has single-handedly spent close to TL 1 billion in Syria since the war broke out in the country in 2011. The nongovernmental organization runs seven different refugee camps for internally displaced people in the Idlib region, sheltering around 200,000. It has established 34 clothing shops where Syrians can find clothes, shoes and other essentials free of charge.

Aksoy said 230,000 Syrians are currently taking shelter in 21 temporary refugee centers in 10 provinces, while more than 3 million Syrians continue their lives in cities. He called on the EU to keep its promises and take steps to share Turkey's economic burden. "Nearly $30 billion spent for refugees by Turkey. We expect the countries who criticize us to take the necessary steps to alleviate this country's burden," he said.

In March 2016, Turkey and the EU signed a refugee deal to discourage irregular migration through the Aegean Sea by implementing stricter measures against human traffickers and improving the conditions of Turkey's 3 million Syrian refugees.

The deal included an aid package to be dispersed in two allocations of 3 billion euro each to help Turkey care for the millions of refugees being hosted in the country, and the EU promised to initially devote 3 billion euros in its first tranche for projects to support Syrian refugees. The second part of the aid is yet to be discussed within the 28-nation bloc. However, only slightly less than 1 billion euros have been transferred so far.

Syria has been locked in a vicious civil war since early 2011 when the Bashar Assad regime cracked down on prodemocracy protests with unexpected ferocity. This led to a military conflict between Syrian opposition groups and the Assad regime over territory. Hundreds of thousands of civilians have been killed in the conflict, mainly in regime airstrikes targeting opposition-held areas, while millions more have been displaced.

Touching on the U.N. Security Council's resolution of truce in Syria, Aksoy underlined that Turkey's Afrin operation is not part of the truce decision. U.S. Department of State spokesperson Heather Nauert previously claimed that the resolution foresees truce in all parts of the Syria and called on Turkey read the resolution carefully.

Aksoy stated that when read carefully, it would be understood that the resolution of truce does not encompass the fight against terrorism.

The U.N. Security Council last month voted for a cease-fire resolution to put an end to the humanitarian crisis in Syria's Eastern Ghouta. While the U.S. and France insisted that the resolution includes Afrin, Ankara argued that Operation Olive Branch complies with international law, saying that the operation is in line with U.N. Security Council resolutions, especially No. 1624 (2005), 2170 (2014) and 2178 (2014) as well as Article 51 on the Right to Self Defense of the U.N. Charter and respect for Syria's territorial integrity.