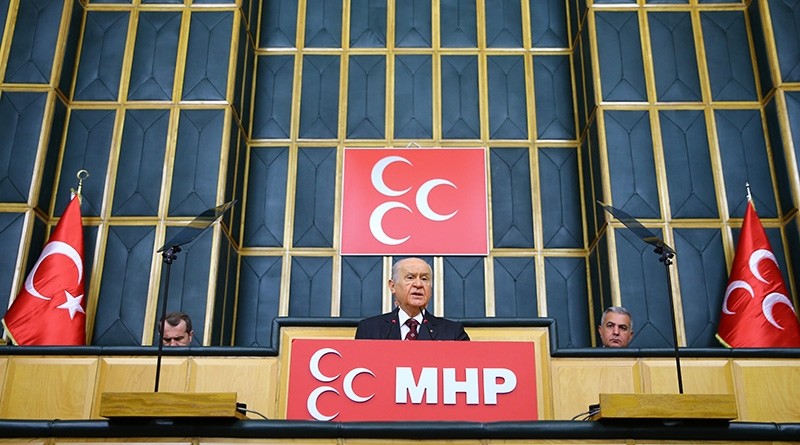 Opposition Nationalist Movement Party (MHP) Chairman Devlet Bahçeli has praised the operation of Turkish intelligence agency in Kosovo that resulted in six senior members of the Gülenist Terror Group (FETÖ) being brought back to Turkey.

In cooperation with Kosovar intelligence, Turkey's National Intelligence Organization (MIT) arrested six men, who were said to be in charge of getting FETÖ members out of Turkey to go to Europe and the U.S., alongside their activities in the Balkans.

The group brought back to Turkey by a private plane, is made up of Cihan Özkan, Kahraman Demirez, Hasan Hüseyin Gunakan, Mustafa Erdem, Osman Karakaya, and Yusuf Karabina, all wanted in Turkey as FETÖ fugitives.

"This is what the [Turkish] state should do," Bahçeli said during his party's parliamentary group meeting on Tuesday.

He added: "There are so many [FETÖ] traitors running wild in the U.S. and European countries."

"If the traitor priest in Pennsylvania would be held at night by a brave Turkish youth while throwing a hood over his head, and then if he could be brought to Turkish justice while being brought with a plane or ship over the ocean, in that case, all project owners' masks would be dropped," Bahçeli said.

"That way, national conscience will take a deep breath."

He reiterated that FETÖ, which orchestrated the July 2016 defeated coup in Turkey, was a "project terror group."

Bahçeli said that Turkey would continue to take necessary steps for the security of its southern borders.

"If the Iraqi government cannot clear Sinjar, which is 60 kilometers away from our borders, of [YPG/PKK's] traitors, Turkey is capable of doing it," said Bahçeli.

"Destroying all terror targets starting from Qandil to northern Syria by neutralizing all terrorists is a matter of honor for the Turkish state."

Airstrikes on PKK targets in northern Iraq, where the terror group has its main base in the Mt. Qandil region near the Iranian border, have been carried out regularly since July 2015, when the PKK resumed its armed terror campaign against Turkish forces.

In late March, Iraqi troops were deployed in Sinjar after members of the PKK terrorist group withdrew from the district.

Turkish President Recep Tayyip Erdoğan recently hinted at the possibility of a military campaign aimed at dislodging the PKK from Sinjar.

The PKK -- listed as a terrorist organization by Turkey, the U.S. and the EU -- waged a terror campaign against Turkey for more than 30 years and has been responsible for the death of nearly 40,000 people.