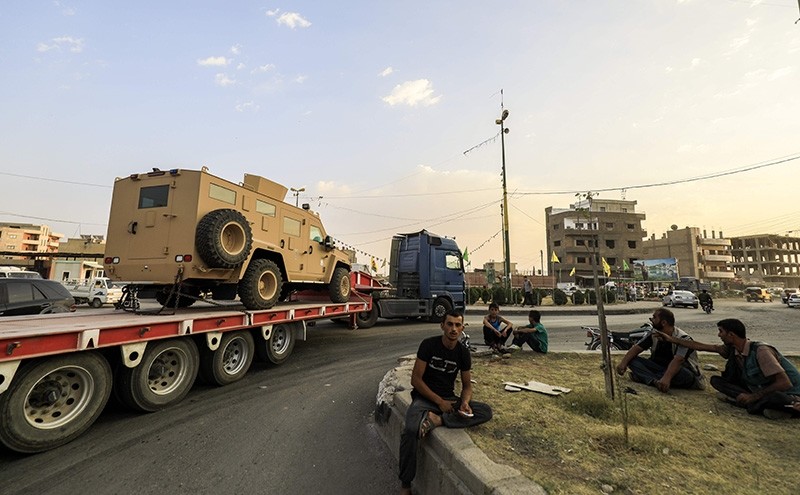 British Labour officials visited the PKK-linked People's Protection Units (YPG)-led authority in northern Syria on Tuesday, pledging to stand with it in the face of threats of attacks.

"We're here for a long-term relationship with you, where we can support you against all the people who are trying to destroy your liberty," said Maurice Glasman, a Labour peer in the House of Lords. "We also bring, with a full heart, our solidarity," he said in Qamishli city, in a stretch of the country which terrorist PKK-linked YPG forces mostly control.

Ankara said it might also extend its operation further east to Manbij unless the PYD/PKK terrorist group leaves the strategically located city.

The U.S. has supported the YPG/PKK under the name of SDF, which Ankara considers the Syrian offshoot of the PKK terror organization.

The PKK has fought a 33-year war against Turkey that has resulted in tens of thousands of deaths, including those of women and children.

Since the start of Syria's multi-sided conflict, the YPG and its allies have carved out autonomous cantons in the north, setting up a federal system of government. Their power grew after taking vast territory from Daesh with U.S. help.

Abed al-Karim Omar, a top member of the YPG-linked self-administration in the north, said the British group that arrived on Tuesday marked the first such public, high-level delegation.

"There were meetings previously not declared," he said. "But this is the first visit in this official way."

Glasman said they would tour parts of northern Syria, meeting fighters of the YPG and its all-female YPJ affiliate, as well as local civil councils.

Labour MP Lloyd Russell-Moyle said they would "share that back in England with our parliament and with our people," and that he hoped for better scrutiny of arms sales to Turkey.

"We want to say we are with you side by side," he said.

Although western countries deny any links between the PKK and its Syrian offshoot YPG, there is sufficient evidence to prove the links between the two, including the PKK's statements that the two operate under the umbrella of the KCK with the same ideology and structure.