Sheep in wolf’s clothing, France out to antagonize all sides in Syrian crisis 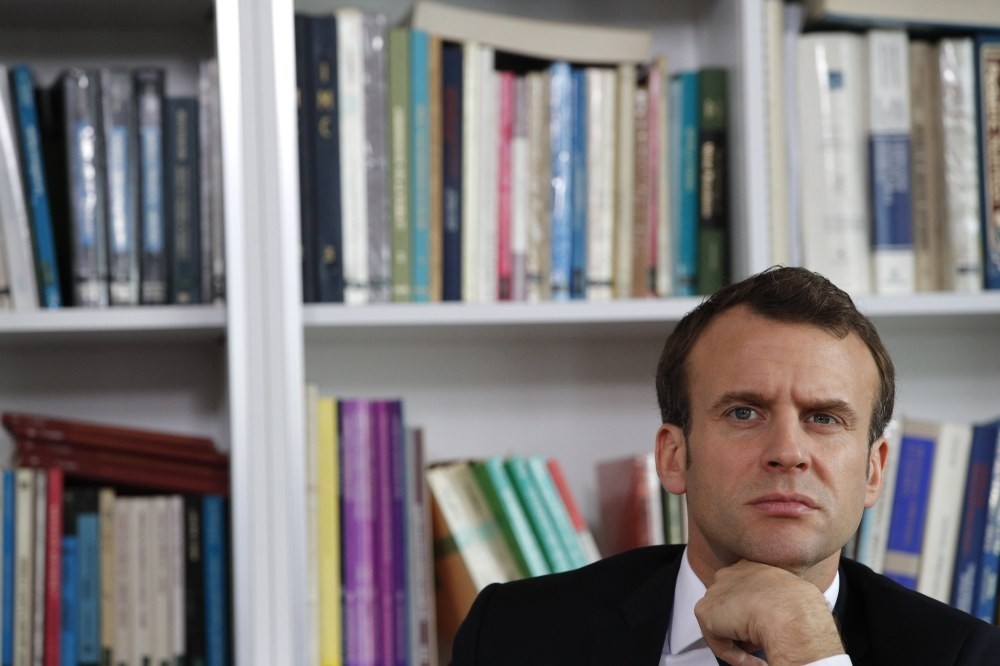 Last week, French President Emmanuel Macron (above) said that he hopes that a dialogue can be established between the Syrian Democratic Forces (SDF) and Ankara with help from France and the international community.
by Şeyma Nazlı Gürbüz Apr 07, 2018 12:00 am

Although France would like to return to its colonial days in Syria by increasing its influence in the country, the U.S. seems unlikely to leave its presence in the region to another actor yet

France has expressed its intention to enter the Syrian war as a possible replacement for U.S. troops if they were to be pulled out. Recent statements from leaders of both France and the U.S. voice U.S. President Donald Trump's willingness to leave the country and Paris's desire to become the new patron of the PKK-affiliated People's Protection Units (YPG) in northern Syria. However, according to some experts, this is delusional on France's part, as they say its military is insufficient and the country does not have the economic influence or power, it once had.

Trump said in late March that the U.S. would withdraw from Syria in the near future, which was followed by French President Emmanuel Macron saying that he hopes a dialogue can be established between the Syrian Democratic Forces (SDF), which is dominated by the YPG, and Ankara with help from France and the international community. According to Saadet Oruç, a columnist for Daily Sabah and presidential advisor, Macron is aiming to follow a different route than former French leaders.

"However, he almost always miscalculates his political moves and their outcomes," she said.

Turkish authorities responded with outrage to Macron since he voiced support for the YPG and SDF. First, President Recep Tayyip Erdoğan condemned Macron's statements and said Turkey is very saddened by France's "completely wrong" approach to Syria, adding that the remarks suggesting intermediation between Ankara and the SDF, if true, was "far beyond one's limit."

hopes that France will not make the same mistake as the United States regarding helping YPG in Syria.

According to Hüsamettin İnaç, the dean of the Faculty of Economics and Administrative Sciences at Dumlupınar University, one of France's main concerns is the Mediterranean. "France is being excluded from the Mediterranean, where there is a huge natural gas resource. So in order to have its own share of it, France aims to increase its influence in the region," he said.

In Oruç's opinion, another reason is the summit that was held in Ankara with the participation of the Turkish, Russian and Iranian presidents. "Despite wanting to participate in the summit, Macron was excluded, which is why he has taken such a step," she said.

Still, according to Anadolu Agency (AA), more than 100 French special forces have been observed in the towns of Sarrin and Ayn Issa, as well as the strategic Mishtanur Hill and at the U.S. air base in Harab Isk near the French Lafarge cement plant. To the south in Raqqa, more than 30 French troops are also stationed alongside YPG forces.

French and U.S. troops in the region are reportedly carrying out field operations with the YPG.

On June 9, 2016, Agence France-Presse (AFP) reported that French special forces had been stationed in areas controlled by the YPG, giving the French Defense Ministry as their source. In addition to special forces, France's First Marine Infantry Paratroopers Infantry Regiment (1 RPIMA) and the 10th Parachute Commando (CPA 10) forces also operate in the region.

Although on the record, these troops are supposedly stationed in northern Iraq, they often cross the border into northern Syria. Locals told AA that in the past three days, border crossings into Syria by French troops have increased.

France has soft power influence since it was the country that dominated Syria until the 1940s. İnaç added: "France's effect on the country's life style and culture is very apparent. However, today, France does not have the capacity to replace the U.S. or fulfill U.S. demands in the region."

"Still, despite what France wants to do, I do not think that such a move will take place," Oruç said, referring to a U.S. withdrawal from the region. "Even if the U.S. is determined to leave the region, it would not leave its place to France. There is no sustainability in Macron's Syrian policy," she said. Trump is also alone in his stated plan to withdraw from Syria. The Pentagon, State Department and CIA are all deeply concerned about the potential ramifications if the U.S. leaves behind a power vacuum in Syria, as are Israel, Arab leaders and other countries in the U.S.-led coalition that has fought the Daesh terrorist group in Iraq and Syria since 2014.

"The reason why we are discussing this right now is the constant struggle between the different U.S. departments," İnaç said, adding that Trump cannot force the Pentagon to recognize his dreams of making America great again by retreating from the Middle East. "So I don't think that the U.S. will leave the region in the near future," he added. When asked about Trump's statement about a withdrawal, the Pentagon referred to the White House while State Department spokeswoman Heather Nauert said she was not aware of the decision and declined to comment further.

Gen. Joseph Votel, the commander of U.S. Central Command (CENTCOM), which coordinates the anti-Daesh operations in Iraq and Syria, said that the U.S. will not leave Syria yet, explaining that there are still some areas where Daesh terrorists are present.

İnaç said there are four major problems to deal with. These are the security of Israel, the enclosure of Iran, leaving the region to Russia's dominance and giving up on the position of being the world's number-one superpower.

He added that "these are all making the decision harder to take," and that if one would say that the U.S. is permanent in the region, it would be wrong because the U.S. does nothing to extend its time of it presence there. "However, the opposite is not true, as well," he said.

"That is to say, even the U.S. does not know what to do next. It is in a period of inability to make a concrete decision."