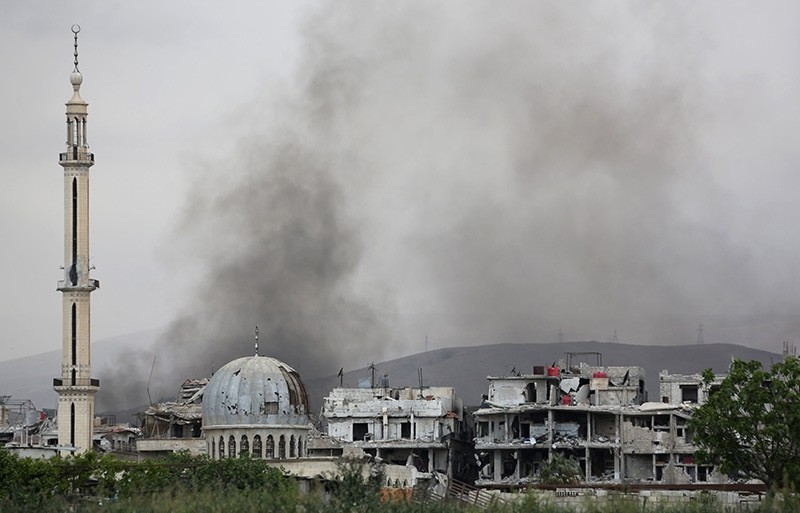 Smoke billows behind destroyed buildings in the former rebel-held town of Saqba in the eastern Ghouta region on the outskirts of Damascus on April 10, 2018. (AFP Photo)
by Daily Sabah with Wires Apr 11, 2018 12:00 am

Prime Minister Binali Yıldırım urged the United States and Russia to cooperate in the Middle East to relieve the wounds of civilians and ensure the territorial integrity of Syria and Iraq without going hand in hand with terror organizations.

Russia and the U.S. should step back from their bickering over Syria, which resembles a "street fight," and recall that millions of lives are at stake, Yıldırım said Wednesday in Istanbul.

"What are they doing? They threaten each other by posting tweets," the said.

Meanwhile, Deputy Prime Minister Bekir Bozdağ said that problems in Syria cannot be resolved through "military means," while referring to the latest row between the U.S. and Russia.

Speaking to reporters in capital Ankara, Bozdağ said: "Turkey from the very beginning said conflicts in the region [Syria] must be stopped and problems here could not be resolved through military means."

"We also said a political solution is quite important."

"Russia vows to shoot down any and all missiles fired at Syria. Get ready Russia, because they will be coming, nice and new and 'smart!'" Trump tweeted Wednesday.

On Monday, the American president vowed to take action within two days following a suspected chemical attack in Syria's Douma, saying the public would "probably" be made aware of any retaliation "after the fact."